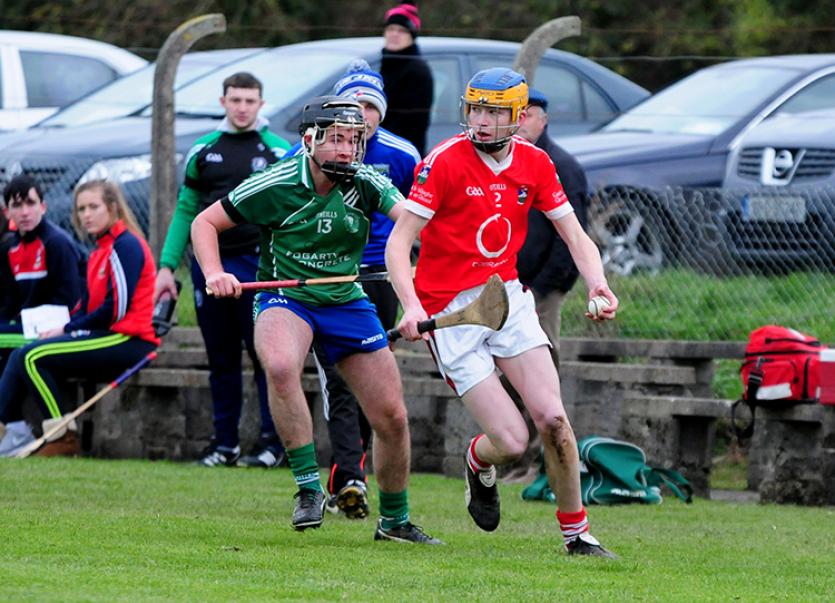 The game went to extra time with Gortnahoe-Glengoole’s Ronan Teehan pointing a free with the last puck of the game to force extra-time. The replay is provisionally fixed for this coming weekend.

Meanwhile a tired Toomevara team beat Carrick Swan with 11 points to spare in a one-sided Tipperary Water County Under-21A Hurling Championship semi-final played on Sunday afternoon (0-19 to 1-5) in Golden. Just 24 hours previously the Greyhounds battled to a standstill in a hard-fought North Tipperary under-21A hurling final against Kilruane MacDonagh’s in Templederry, a game which went to extra-time and finished all square. Then, on Sunday, Toome were asked to play Carrick Swan in a county semi-final following their nomination to represent the North Tipperary division.

On Saturday the final of North Tipperary Under-21A Hurling Championship between Kilruane MacDonagh’s and Toomevara finished in a draw after extra-time. At full-time the sides were level on 0-13 apiece in Templederry while the sides could not be separated in extra time and finished with 19 points each. Prior to the game the North Tipperary Board had decided to nominate Toomevara to represent the division in the county semi-final on Sunday against Carrick Swan.

Tipperary hurling star Séamus Callanan has been nominated for the RTÉ Sport Sportsperson of the Year award. And, the Tipperary Star is calling on supporters of the blue and gold everywhere to vote in support of the Drom & Inch man.

On Saturday the national broadcaster published the list of nominees for the RTÉ Sport Sportsperson of the Year award in association with Sport Ireland - the winner will be decided by a public vote.

To vote for Séamus Callanan text A to 53125 (each text vote costs 60c) or vote (free) online for the Tipperary inter-county hurling star by clicking here.

Voting will close on Monday, December 12th at 10am while the winner will be announced live at the awards ceremony on Saturday, December 17th at 9pm.

A bonus-point win (32-17) over the famed Blackrock College on Saturday afternoon at New Ormond Park propelled an impressive Nenagh Ormond team to the summit of division 2A in the Ulster Bank League. And, it proved to be a more than encouraging afternoon for Tipperary rugby when news filtered through that Cashel RFC had also got the better of Queen’s University (24-22). Both Tipperary sides now take a break from league action until Saturday, January 17th. For a report and video highlights package from Nenagh Ormond’s win over Blackrock College please click here.