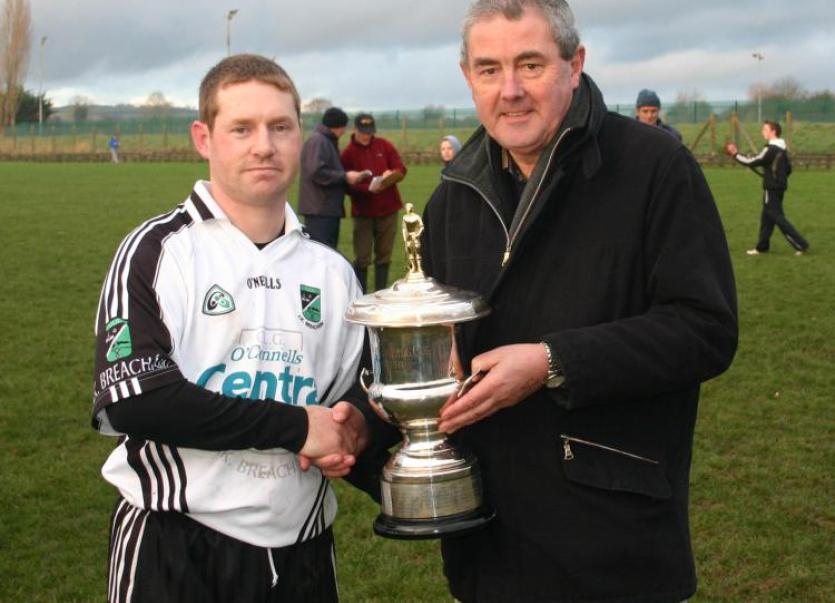 PJ Maher, the County Board Development Officer (and Insurance Officer), addressed the North Tipperary GAA Convention on Thursday, December 8th and appealed to the clubs of the division to complete a survey related to a new strategic plan for the county.

Speaking at MacDonagh Park, Cloughjordan PJ Maher explained that County Board chairman Michael Bourke had charged the County Board Development Committee with the responsibility for piecing together a development plan which would propel the Premier County toward and beyond 2020.

PJ Maher indicated that the strategic plan would be “short, sweet and to the point” before explaining that the development committee made an initial decision to survey the clubs, officers, players and the general public on their views concerning the challenges faced by the county. Members of the general public will be able to access the survey on the Tipperary GAA website in January while the officers of each club will be contacted directly with specific regard to the matter.

“We want to identify the areas where we are going wrong and where we can do better. We are just interested in what you have to say,” PJ Maher explained.

Mr Maher predicted that club fixtures would be an issue for GAA people in the survey.

“If we were here 25 years ago we would have been talking about it and if we are lucky enough to be here in 25 years’ time we will also be talking about it,” PJ Maher said.

“There are other areas and issues that we also need to look at. For instance do we need four divisions,” the Boherlahan-Dualla man asked.

PJ Maher indicated that everyone’s views are welcome and that the committee were “hoping to get as big a response as possible from the public at large”.

“The bigger the response that we get the clearer the picture that we will get,” PJ Maher said.

At a recent Committee Meeting of Coiste Chontae Thiobráid Árann on Tuesday, November 29th County Board Development Officer PJ Maher issued a stark warning that “a club will end up going to the wall” as a result of an insurance claim - Maher argued that clubs in Tipperary were “ignoring exclusions on their public liability insurance” at their peril.

In his report on behalf of the development committee to the County Board meeting PJ Maher highlighted the fact that the clubs public liability insurance was now governed by a significant number of exclusions on their respective policies. And, he warned that if clubs ignored or failed to realise the significance of those exclusions it could cost them dearly. If, for instance, a club is engaged in a specific activity on their premises and that activity is excluded on their respective policy it could be an issue should a public liability claim be made against that club with relation to that activity.

“There could be a claim and the GAA’s insurers will walk away from it,” PJ Maher told delegates.

“A GAA club will end up going to the wall over this, it is going to happen,” Maher added before appealing to clubs to read the exclusions on their public liability insurance - “don’t ignore it” he pleaded.

The exclusions refer specifically to activities carried out on club premises which are, more often than not, unrelated to the actual playing of Gaelic games.

Mr Maher raised the issue, once more, at the North Tipperary GAA convention. He pointed out that the details of the new declarations and exclusions pertaining to each club’s public liability insurance policies were now with the respective club secretaries.

“I would ask clubs to pay particular attention to the new exclusions and additions,” PJ Maher said.

“It is extremely important that clubs pay particular attention to that,” he added before encouraging clubs to contact himself or Croke Park directly should they have any questions.

“It is in all our interests that claims are kept to a minimum,” PJ Maher said.

It was also revealed at the North Tipperary GAA Convention by Development Officer PJ Maher that it was decided, following a delegate vote, at the November meeting of the County Board to make it compulsory for all clubs to complete an up-to-date health and safety statement.

A “safety statement” is the name given to the document which outlines how an organisation manages their health and safety. It is related to the Safety, Health and Welfare at Work Act (2005).

Mr Maher revealed that the County Board Development Committee had negotiated a very competitive fee with the Europlan Group in Clonmel and that Europlan would be in contact with every club in the county with specific relation to their health and safety statement. This service will cost each club €325 (inclusive of VAT).

“It is clear to me that quite a number of clubs have not got up-to-date health and safety statements,” PJ Maher said in Cloughjordan on Thursday.

“If you don’t have an up-to-date health and safety statement the chances of Croke Park defending a claim successfully are reduced substantially,” the Boherlahan-Dualla man added.

“I am appealing to clubs that if anything happens that might lead to a claim that they take note of it and take a witness statement at the very least. I have to get that message across to the clubs - it is very, very important,” PJ Maher explained.

The management of GAA grounds and facilities in terms of insurance is now a considerable issue for the association with the vast majority of public liability insurance claims being progressed against the association related to non-GAA activity.

A number of preventive measures, however, can be adopted by clubs with relation to property insurance in terms of carrying out a proper risk assessment, reviewing all club activities, making a distinct effort to maintain club property properly and by the completion of a comprehensive health and safety statement.

If a club has a query related to their public liability insurance or any activity which that club may be engaged in they are encouraged to contact County Board Development Officer PJ Maher directly.

Development Officer PJ Maher also revealed at the North Tipperary GAA Board Convention hosted by the Kilruane MacDonagh’s club in Cloughjordan on Thursday, December 8th that two club officer training events would be held in the division on January 9th and January 17th at the Abbey Court Hotel, Nenagh.

Mr Maher revealed that representatives from just four clubs in the North division attended a previous event and that the Development Committee had decided, as a result, to “bring the event out to the divisions” this year.

“It is absolutely vital that we get a decent turnout,” PJ Maher said before indicating that each club would be contacted directly with specific relation to the matter.