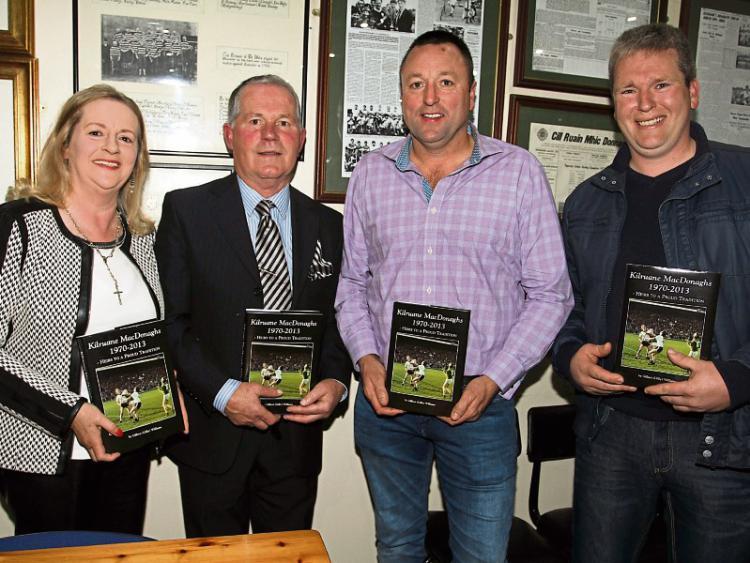 The Kilruane MacDonagh’s club emerged as a class act following an unfortunate under-21A hurling championship affair which played out in the North Tipperary division in recent weeks.

The issue related to the process adopted by the North Board to nominate the Toomevara club to represent the division in the county under-21A hurling semi-finals. Indeed, the entire episode was discussed, in detail, at the North Tipperary GAA Convention hosted in MacDonagh Park, Cloughjordan on Thursday, December 8th.

And, from the moment Kilruane club chairman Matt Cleary welcomed the delegates to Cloughjordan and assistant secretary Gilbert Williams vented the club’s concerns the MacDonagh’s were impeccably represented. Indeed, Mr Williams behaved in the honourable manner which the people of North Tipperary have come to associate the Kilruane club with for decades.

Gilbert Williams spoke maturely, was measured in his responses, dealt sensibly with the issue at all times, indicated that the MacDonagh’s club wanted to put the issue behind them and pledged the support of the Kilruane club to divisional chairman Dan Kennedy.

In November the five remaining clubs in the North Tipperary under-21A hurling championship met to discuss whether the division would nominate a side to compete in the county semi-finals - time was running out for the division to complete its championship in time to meet a deadline set by the county Competition Controls Committee (CCC).

The county CCC later adjusted their semi-final deadline and presented the North Tipperary division with an opportunity to play their under-21A hurling final on Saturday, December 3rd and then a county semi-final on Sunday, December 4th.

Prior to that divisional final between Toomevara and Kilruane MacDonagh’s news filtered through that in the event of a draw in the North under-21A final the Toomevara club would be nominated to represent the division against South Tipperary’s Carrick Swan a day later - the process by which Toomevara were nominated to do so, however, remained entirely unclear.

The North Tipperary under-21A final between Kilruane and Toomevara duly finished in a draw following extra-time and Toomevara represented the division in a county semi-final against Carrick Swan. 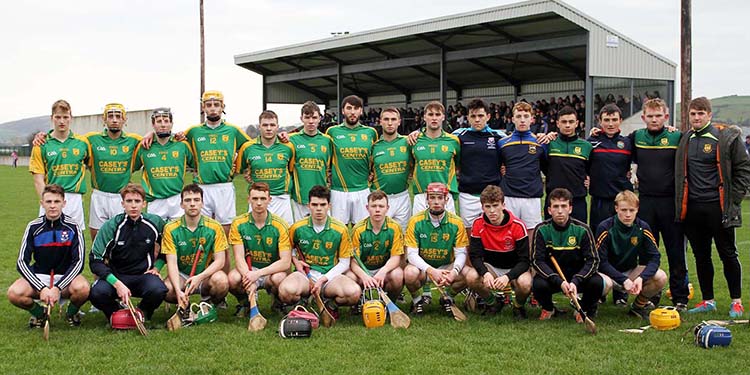 Due to the confusion surrounding the issue Kilruane MacDonagh’s convened a meeting of concerned club members.

At that meeting the club decided to write a letter, addressed to North Tipperary Board secretary Marian Minehan, outlining the concerns of the club members and requesting an answer to a series of questions concerning the procedure adopted to nominate the Toomevara club.

However, Mr Williams explained that the Kilruane club had “serious concerns” regarding the “procedure adopted to nominate” Toomevara. Gilbert Williams explained that the Kilruane club sought clarification on the procedure involved, an explanation as to why no coin toss or draw took place and an explanation why there had been a “conflicting” version of events forthcoming from North Board officers.

“The fact that I having been born in Toomevara had nothing to do with it,” Dan Kennedy said.

Mr Kennedy explained that at a meeting of the county CCC he could “not get the idea of a toss or draw through” and that, as chairman of the North Board, he was “put in a position to nominate a team”.

“I had no opportunity to call a meeting of the (North) CCC,” Dan Kennedy added before explaining that he had discussed the issue with North Board secretary Marian Minehan.

“I discussed it through with Marian (Minehan) and it was my opinion that Toomevara were the team that should be nominated,” Dan Kennedy said.

In an attempt to explain the criteria employed before making such a decision Mr Kennedy revealed that “Toomevara had made an appeal to the hearings committee to be nominated and we were told that we would have lost that one”. This is factually incorrect. And, during the concluding stages of the discussion Toomevara delegate Jackie Meagher said that he wished to clarify the fact that Toomevara “never sought the nomination”.

“Our appeal was made on November 25th with four clubs left in the competition. At no stage did we look for Toomevara to get that nomination. Our appeal was against the decision not to nominate a team. We never sought a nomination and we would like that to be clarified,” Jackie Meagher said.

“I have to admit that it was not the proper way to do it, but I did it and I have to stand over that whatever the consequences may be,” Dan Kennedy admitted in response to Gilbert Williams’ questions regarding the matter.

“I stand over it (the decision) and I hope that the reasons will be accepted,” Dan Kennedy added.

“I could just as easily have nominated Kilruane, but I felt that because Toomevara were looking for a way to put themselves forward they should be the one nominated. The other three clubs were against making a nomination,” Dan Kennedy said.

“The Kilruane MacDonagh’s club never had any issue with Toomevara being nominated to represent the division in the county semi-final. It was the nomination process that caused unease in our club,” Gilbert Williams said in a measured response.

“I want to also state clearly that we are not looking for blood with regard to this issue,” Mr Williams added.

“No one at our club is seeking recrimination,” the Kilruane assistant secretary said.

Gilbert Williams indicated that the Kilruane MacDonagh’s club appreciated the work carried out by the North Board and especially secretary Marian Minehan with regard to the “mammoth number of games” which took place in the division and an under-21A hurling championship which had “more twists than a bad road”.

Further to this Gilbert Williams revealed the details of an email exchange between the Kilruane club and Toomevara secretary Gary Delaney which took place and established the fact that both clubs were agreeable to the potential solution of tossing a coin to earn the right to face Carrick Swan in the county under-21A semi-final. Both clubs were notified by North Board secretary Marian Minehan that a coin toss in those circumstances would not be accepted by the county CCC.

Gilbert Williams described the course of action pursued by North Board chairman Dan Kennedy as a “major error of judgement”.

“We acknowledge that you have admitted to this error of judgment and we accept that,” Gilbert Williams said.

“We commend you for accepting responsibility for the decision, but we disagree fundamentally with the criteria used,” Mr Williams added.

The Kilruane assistant secretary proceeded to explain that at the November meeting of the five North clubs still involved in the under-21A championship the MacDonagh’s “made it clear that if there was to be a nomination we wanted Kilruane in the hat”.

“At no stage did we express a wish not to be included,” Gilbert Williams said before thanking the North Board for “this opportunity to ventilate our concerns”.

“We are happy with some of your answers, some we are not and some are factually incorrect,” Gilbert Williams said.

“It is our wish that we move forward from here. No one is immune from mistakes,” Gilbert Williams added before quoting Oscar Wilder who said “experience is simply the name we give our mistakes”.

“Our club would like to pledge its support to you Mr Chairman, Marian Minehan as secretary and the North Board. Let us move on. As far as Kilruane are concerned the matter is closed,” Gilbert Williams concluded.

Mr Williams’ closing remarks on the issue were greeted by a warm and spontaneous round of applause from the delegates present. 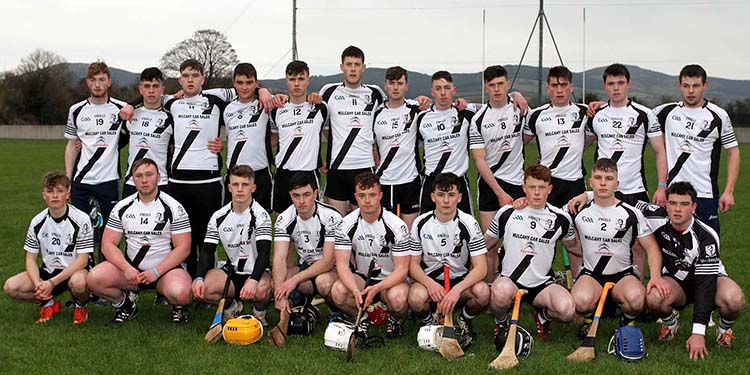 “I have no hesitation in taking personal responsibility for what happened - a lot of it was wrong and I would like to apologise to the Kilruane club,” North Board chairman Dan Kennedy said.

“If I had Monday week last back to live again I would have done things differently and more openly. I would commend the Kilruane club for taking the stance that they have taken. This is a situation that I am not personally proud of. I would also like to apologise to the members of our own CCC,” Dan Kennedy added.

County Board chairman Michael Bourke said that he “would like to commend both the Kilruane club and the chairman”.

In defence of Mr Kennedy County Board chairman Michael Bourke, while drawing from personal experience of having chaired the county CCC, added some insight into the situation that Dan Kennedy found himself in.

Mr Bourke described it as a “key point” that “it would not be accepted to toss after a game by the members of the CCC and that is a fact”. And, with respect to the wider issue of the fixture controversy, a subject the Upperchurch-Drombane man described as a “thorny issue”, Michael Bourke asked the delegates present to consider the following.

“The first question I would ask is: was every fixture played at the first available date,” Michael Bourke asked.

“Dan (Kennedy), being the gentleman that he is, allowed that (delayed fixtures) to happen and it came back to bite him,” the County Board chairman concluded.