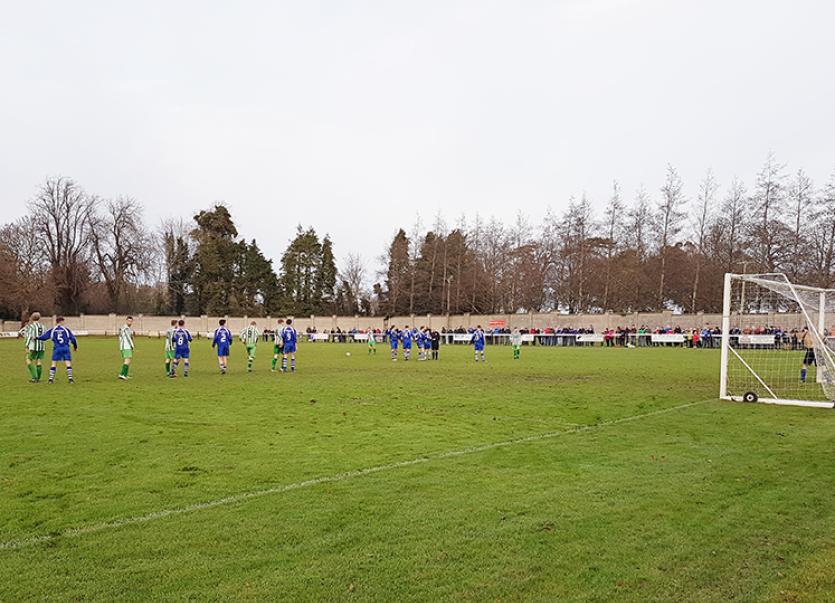 After a campaign which featured wins over Riverside Athletic (West Cork League), Carrick United (Waterford & District League) and Carew Park (Limerick District League) St Michael’s were made favourites to win this provincial title, but James Walsh’s side encountered an Abbeyfeale United side who had little interest in playing the role of the willing victim.

St Michael’s showed flashes of what they are capable of, but did not consistently dominate this contest. Indeed, the Saints will have to improve significantly should they wish to get the better of Usher Celtic (Dublin) in the fifth round of the FAI Junior Cup on December 18th.

The early signs were encouraging for the Saints. A smartly-taken free kick from James Walsh in the sixth minute found David Grincell who turned and fired in a low shot which Abbeyfeale ‘keeper Billy Quirke did well to save. From the resultant corner a Paul Breen header flew over the bar and, already, the Saints looked the more accomplished outfit. Indeed, Billy Quirke was required to make another good save at the feet of Grincell in the 30th minute.

The Limerick lads settled, however, and with Pakie O’Connor looking lively down the left flank Abbeyfeale United looked threatening. Indeed, United created a terrific opportunity in the 31st minute, but O’Connor found a post when he should have scored.

St Michael’s closed out the half when piecing together a terrific move - Grincell recycled possession smartly to Russell Quirke; the winger dinked a beauty of a ball in over the Abbeyfeale defence and into the path of Richie Ryan. Unfortunately Ryan’s rasping volley flew wide.

Barry Sheehy was left cursing his luck in the 37th and 52nd minutes when the Abbeyfeale striker saw a free kick and then a gilt-edged heading opportunity fly wide. Sheehy, however, found the target in the 54th minute when a Paudie Smith through ball sprung the offside trap and Sheehy flicked the ball past the advancing Aaron Wall.

Within seconds the Saints threatened an equalizer at the opposite end of the field when Jimmy Carr and David Slattery combined before Richie Ryan demanded an outstanding reaction save from Billy Quirke.

Undeterred St Michael’s poured forward and found an equalizer in the 56th minute when David Slattery connected with Russell Quirke’s terrific cross and thundered a sensational header into the top left-hand corner.

Within ten minutes the Saints found themselves a goal down once more. This time St Michael’s failed to clear, Barry Sheehy intercepted and picked out the unmarked Pakie O’Connor at the far post and the winger finished from close range.

To their credit St Michael’s responded positively to the challenge posed and proceeded to dominate this contest before notching a deserved equalizer in the 82nd minute - left-back John O’Brien conjured a wonderful moment when his back-to-front delivery carved Abbeyfeale open and found David Grincell in space. Grincell had a bit to do to convert the opportunity, but did so when stepping around Abbeyfeale ‘keeper Billy Quirke and firing home the equalizer off his left.

Abbeyfeale were struggling a little now and St Michael’s came close to sealing a famous win in the 91st minute when Paddy Fitzgerald turned his man on the left wing and fired in a cross which David Grincell glanced over.

Extra time began in controversial circumstances when David Grincell controlled a Paddy Fitzgerald cross in the third minute on his chest and cracked a wonderful half volley into the top left hand corner. That strike, however, was ruled out by referee Ger O’Connor who indicated that Grincell had used his arm to control the cross. This decision appeared a harsh one. Five minutes later Paddy Fitzgerald caused consternation once more with another jinking run which culminated with Jimmy Carr heading over from close range.

Then, nineteen seconds into the second half of extra time, Abbeyfeale took the lead when smart play from Thomas Smith in the middle of the field featured in a breakaway goal which presented the Limerick Desmond League champions with a precious advantage.