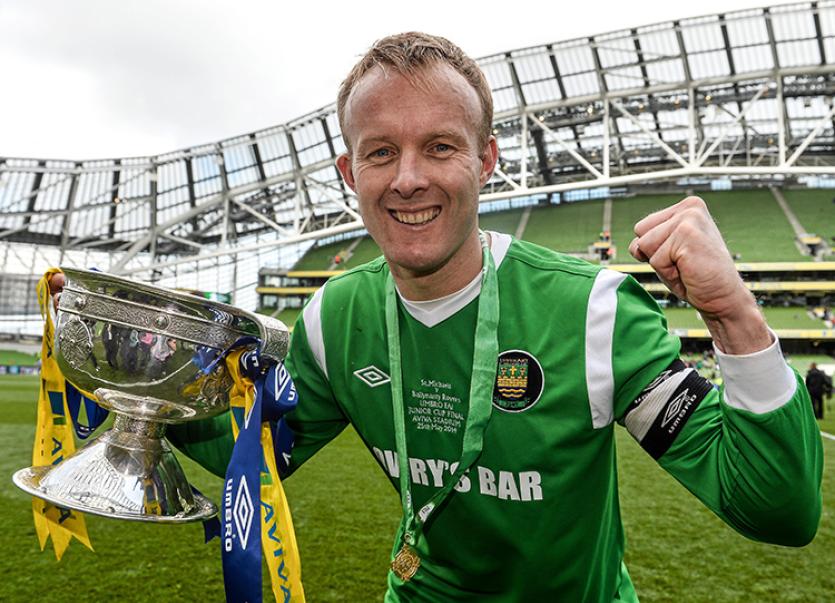 These are exciting and historic times for junior soccer in Thurles - both Thurles Town and Peake Villa featured in last week’s draw for the sixth round of the FAI Junior Cup. Never before have both Thurles clubs found themselves side-by-side at such an advanced stage of the prestigious competition. And, the pair are now busy preparing for sixth round clashes against Crumlin United and Cherry Orchard respectively on the week-ending Sunday, January 15th.

Thurles Town and Peake Villa may also be joined by their Tipperary Town counterparts St Michael’s in the last 32 should the Saints get the better of Usher Celtic (Dublin) next weekend. The winner of that clash will earn the dubious honour of facing Sheriff YC who claimed their third FAI Junior Cup title in five years last May. Tipperary clubs, however, do have form in the competition with Clonmel Town winning the coveted prize in 1994 and St Michael’s taking the honours in 1974 and 2014.

St Michael’s form in the fourth round caught the eye as the Tipperary South & District League champions smashed 18 goals past Kilsheelan United. Peake Villa registered a similarly impressive 8-0 win over Cullen Lattin (with Matthew McKevitt and Pippy Carroll both registering hat-tricks) before the Thurles side beat Cork’s Knocknaheeny Celtic 4-1 away from home to qualify for the last 32. The Peake Villa campaign also featured a notable victory over North Tipperary & District League champions Nenagh Celtic in the third round. Goals from Pippy Carroll and Adam Garrett sealed that result.

Meanwhile Thurles Town were too good for Tipperary Town (3-1) in the fourth round, but it was Thurles’ 2-0 win away to Midleton FC in the fifth which illustrated the potential of Noel Byrne’s side. Goals from Barry Ryan and Paul Kirwan sealed the win. Thurles Town also enjoyed a significant victory over Nenagh Celtic this season when beating their rivals 3-2 in the final of the Premier Division Shield - goals from Micky Comerford, Barry Ryan and Martin Darmody propelled Town over the line.

And, just three wins now separate Thurles Town and Peake Villa from competing in the final of the FAI Junior Cup which is, of course, scheduled to take place in the Aviva Stadium, Dublin next May. 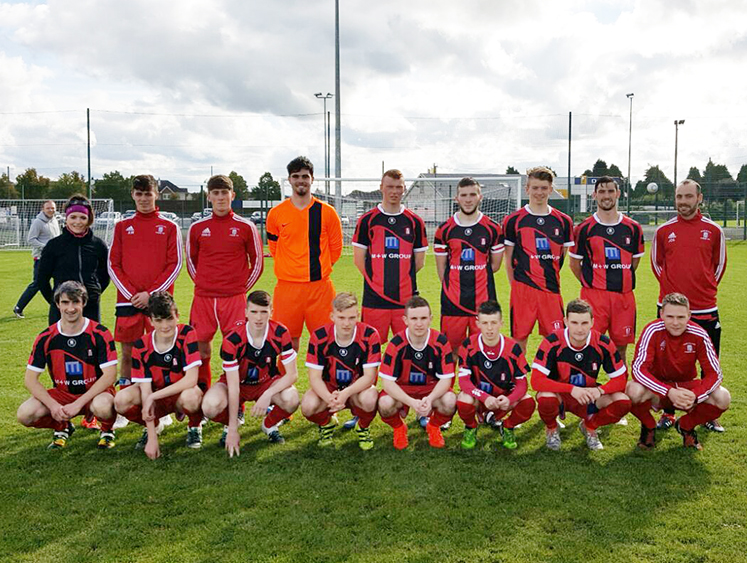 The Peake Villa team who are just three wins away from playing at the Aviva Stadium, Dublin.

“It never has been done before,” Thurles Town manager Noel Byrne said this week when contacted by the Tipperary Star. And, of course there is the chance that if both clubs win their last 32 clash they could be drawn against one another in the last 16.

“It would be interesting if both teams won and if we met in the last 16 or the quarter-finals. We are all hoping for that. If Thurles Town are not going to win; the first result I will be looking for is Peake Villa’s. I cut my teeth and gave a lot of my time to Peake Villa. So, of course I would wish them well,” Noel Byrne said.

It is interesting to note, however, that the sides did meet already this season in the Joe Delaney Cup (a pre-season tournament) last July at the Greyhound Stadium. Paul Kirwan presented Thurles Town with the lead before Dale Loughnane equalized for Villa and Pippy Carroll notched the winner for an impressive side managed by James O’Sullivan.

Thurles Town are, of course, in terrific form since then. Noel Byrne’s side are undefeated and well-positioned in the Premier Division of the North Tipperary & District League. Right now Thurles are ten points behind league leaders Nenagh Celtic, but have six games in hand.

“I came on board with seven or eight games to go at the end of last season. I have been with them since and, thankfully, we haven’t lost a game since last March,” Noel Byrne explained.

“Everyone is thrilled about it. I have been around the block myself and I have been down this road before up to and as far as the final stage, but it’s new ground for the club,” Byrne added.

“A lot of the players that I have at present I would have had in the past. I managed down in Kilkenny City in the Eircom League - I have some of those players who would have come through that experience,” Noel Byrne explained.

“Then there are others that I would have had in my Peake Villa days and I also managed Clonmel Town. As the fella says when you are on the road long enough you are bound to pick up a few contacts here and there. I think I would have a good rapport with most of the lads and I have some very good young players involved in the team as well. So, that is excellent and it makes for a nice mix,” Noel Byrne added.

“I cut my teeth in hurling with my dad being the Rattler and I won my own All-Ireland with Tipperary back in ’81, but then I moved on to other things. I was the chairman of Peake Villa for a good number of years and then I went working with Glasgow Celtic before I moved onto Manchester City scouting. I have a lot of miles on the clock and I would have picked up a lot of experience and contacts along the way.” 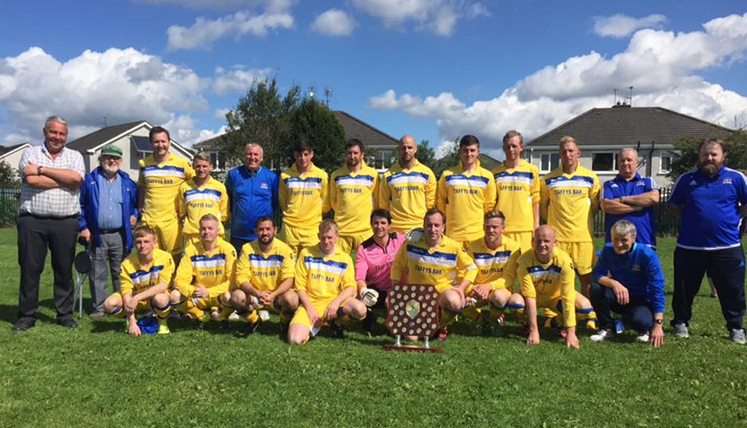 The Thurles Town team who are just three wins away from playing at the Aviva Stadium, Dublin.

And, although Noel Byrne admires Nenagh AFC’s ambition and, especially, their decision to leave the North Tipperary & District League to move to the Limerick District League Thurles Town will not doing something similar any time soon.

“I think it’s fantastic. I can go back to the early 2000s when I was chairman of Peake Villa and we had excellent underage teams, junior teams and all that kind of thing. But we felt that we had nowhere to go with them. So, the decision was that I entered a team in the under-21 Eircom League. We had a great couple of seasons in that - we had Cork City and all of these clubs coming to Thurles. A lot of people have forgotten about that, but if you want to take something forward that’s the type of thing that you have to do. So, I would embrace what Nenagh are doing. Going forward they are doing the right thing,” Noel Byrne said before adding that a similar move is not on the cards for Thurles Town.

“At the end of the day it’s about what’s the best thing to do for the players. That’s what matters. We need to get Thurles Town into a winning capacity in North Tipp before we could even think about that sort of thing. Going forward the big ambition would be that I would like to see Thurles Town having a youths team and a couple of schoolboy teams because I think with a population of eight or nine thousand there is more than enough youngsters to have two clubs with schoolboy teams. That’s what I would be aiming for in time for next season. I would have liked it this season, but I had enough on my plate with the re-structuring of the senior team.”

Thurles Town are still alive in the Tipperary Cup, Munster Junior Cup and, of course, the FAI Junior Cup. Indeed, Town join Peake Villa, St Michael's, Clonmel Celtic and Clonmel Town in the concluding stages of the Munster Junior Cup with the fourth round games scheduled to take place on the week-ending Sunday, January 22nd. But, according to Noel Byrne, the league campaign remains the priority for Thurles Town.

“At the end of the day the league is our priority and anything we get in the line of cups are all bonuses. It would be fine if we were to go out and beat Crumlin or get to the next round of the Munster Junior (Cup). That would be great, but the league is the priority.”

Meanwhile defending champions St Michael’s are one of the favourites to win the Tipperary South & District League Premier League, but Peake Villa are also in a reasonable position and hot on the tail of Clonmel Town and Clonmel Celtic who are setting the early pace.

With a team featuring players like Matthew McKevitt, Pippy Carroll, Maris Baltins, Gary Lyons, Seán Wade, Alan Leahy, Mikey Wade and Dale Loughnane it is hardly surprising that James O’Sullivan’s Peake Villa find themselves competing with, and beating, the very best. Indeed, only the bravest of men would bet against this Peake Villa team beating Cherry Orchard - Villa will face the Dublin club of international renown in the sixth round of the FAI Junior Cup in January.

Thurles Town, of course, will have their work carved out for them to beat Crumlin United on their all-weather pitch in the last 32 of the FAI.

“They are a good side. They are a well-organized side with a good mix of youth and experience. They play on an all-weather pitch which will be a hindrance from our point of view. It is going to be a big step up. They have won the last four league titles in the Premier Division of the Leinster Senior League. And, they are going for five in-a-row. So, that’s a fair challenge in itself,” Noel Byrne said before adding how much joy he was personally gleaming from the experience of managing Thurles Town.