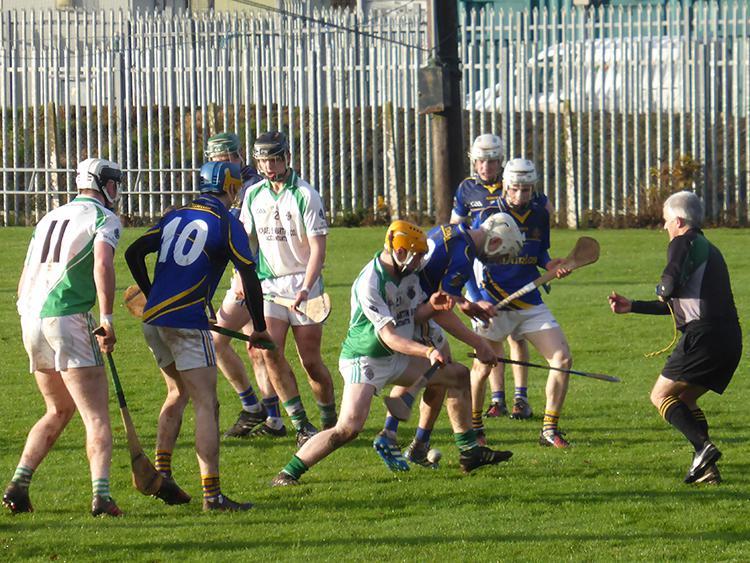 Thurles CBS and Abbey CBS pictured in action at Dundrum on Wednesday.

Thurles CBS have been drawn to face Our Lady’s Templemore in the quarter-finals of the 2016-17 Dr Harty Cup while Nenagh CBS will take on De La Salle, Waterford - the draw was made on Thursday, December 15th.

The winner of the Thurles CBS v Our Lady’s Templemore clash will face the winner of the quarter-final contest between Nenagh CBS and De La Salle, Waterford at the semi-final stage.

The two remaining quarter-finals will see defending champions Árdscoil Rís, Limerick take on Midleton CBS while CBC Cork will face St Colman’s Fermoy for a place in the last four.

The quarter-finals are scheduled to take place on January 11th, semi-finals January 28th and the Dr Harty Cup final is pencilled in for Saturday, February 18th.

On Wednesday, December 14th Thurles CBS edged out Abbey CBS (0-14 to 0-9) in a bruising contest as Dundrum. On November 30th Nenagh CBS progressed to the last eight of the Dr Harty Cup, but only after a tense contest with Castletroy College (1-20 to 1-13). Meanwhile Our Lady’s Templemore signalled their intent and ability when beating Árdscoil Uí Urmaltaigh, Bandon by a whopping 42 points (6-27 to 0-3).

In the last sixteen defending champions Árdscoil Rís, Limerick saw off the challenge of Scoil na mBráithre Rathluirc (4-16 to 1-7) and they will be joined in the last eight by De La Salle College, Waterford who beat Blackwater Community School, Lismore (1-18 to 0-16). Christian Brothers College, Cork beat St Francis College, Rochestown (3-18 to 3-12) and CBS Midleton got the better of Scoil Na Trionóide Doon (1-15 to 1-12) while St. Colman's Fermoy required extra-time to beat St Flannan's Ennis (4-22 to 2-19).

The quarter-finals are scheduled to take place on January 11th, semi-finals January 28th and the Dr Harty Cup final is pencilled in for Saturday, February 18th.