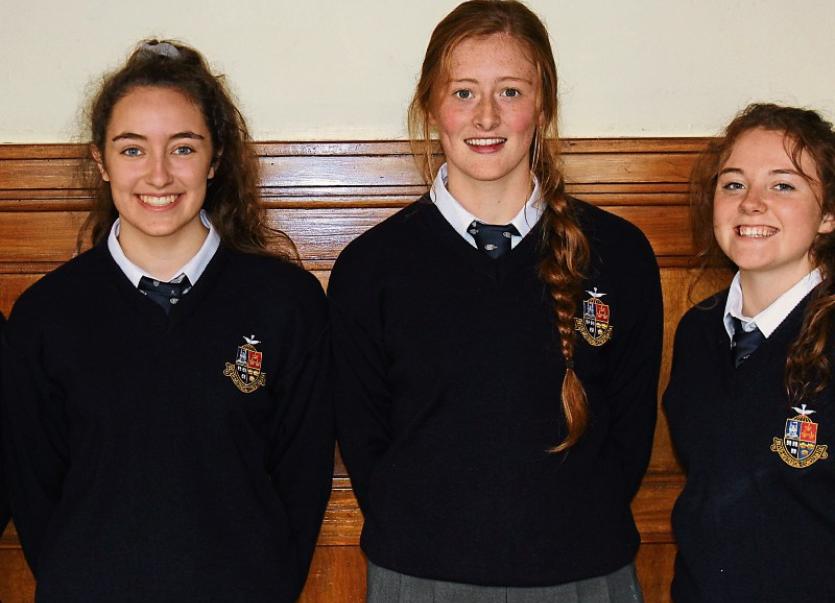 Kate Barlow, Aoife O'Shaughnessy and Roisin Finnane were on the Rockwell College team that qualified for the Munster semi-final.

Rockwell College are throughto the Munster Senior Ladies Gaelic football semi final following a 4-13 to 2-3 win over Spanish Point in the quarter final.

Rockwell, comprising a number of inter county players, are looking confidently forward in this competition. Played in St. Patrick’s G.A.A. club in Limerick, Rockwell played against a slight breeze in the first half.

Laura Morrissey won the throw in and tapped the ball back to Kate Barlow who delivered into Laura Stocksborough, and she duly rattled the net.

Roisin Finnane and Laura Stocksborough, showing deft skills,  dominated the half and full forward lines, scoring a goal and five points, with another coming from Eilish Kennedy, to leave the half time score at 2-7 to 1-3 in favour of Rockwell.

Rockwell took control of the second half with Finnane and  Stocksborough in full flow.

When Spanish Point were able to launch attacks they were dispossessed by a very resilient and dour Rockwell defence of Aoife O’Shaughnessy, Niamh Walsh and Claire Hickey.

Once Rockwell had built up a head of steam it was difficult for Spanish Point to break through, particularly with Laura Morrissey and Kate Barlow tracking back. The match ended as a contest midway through the second half