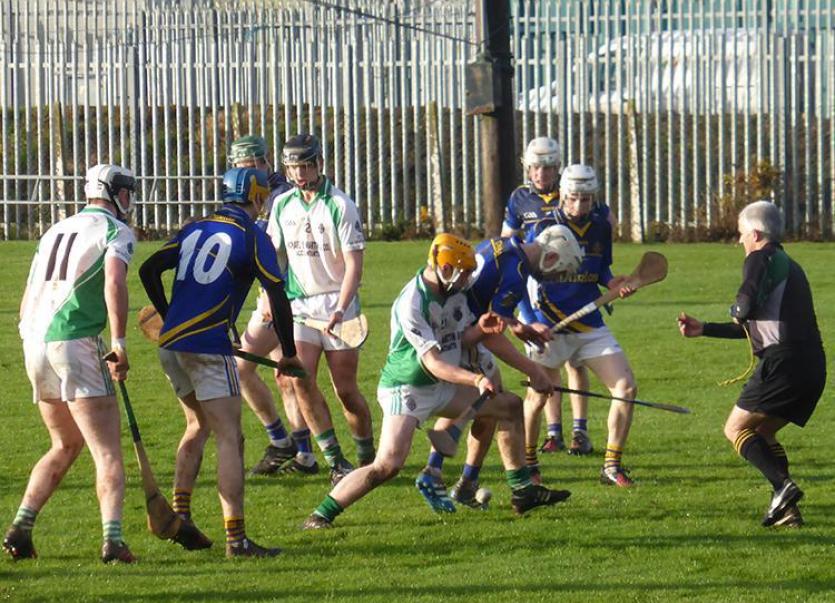 Thurles CBS and Abbey CBS pictured in action at Dundrum in December.

The fixtures for the quarter-finals of the Dr Harty Cup have been finalised as Thurles CBS and Our Lady's Templemore gear up for an enticing last eight clash between the Tipperary rivals at The Ragg on Wednesday, January 11th (throw-in 1.30pm).

The remaining quarter-finals feature defending champions Árdscoil Rís, Limerick against CBS Midleton in Bansha and Christian Brothers College, Cork against Coláiste Cholmáin, Fermoy in Blackrock. Extra time is scheduled to be played, if necessary, in all games.

The winner of the Thurles CBS versus Our Lady’s clash will face the winner of the quarter-final contest between Nenagh CBS and De La Salle at the semi-final stage. The semi-finals are scheduled to take place on January 28th and the Dr Harty Cup final is pencilled in for Saturday, February 18th.

On December 14th Thurles CBS edged out Abbey CBS (0-14 to 0-9) in a bruising contest last sixteen contest in Dundrum. On November 30th Nenagh CBS progressed to the last eight of the Dr Harty Cup, but only after a tense contest with Castletroy College (1-20 to 1-13).

Meanwhile Our Lady’s Templemore signalled their intent and ability when beating Árdscoil Uí Urmaltaigh, Bandon by a whopping 42 points (6-27 to 0-3). Our Lady’s led that contest 2-13 to 0-1 at the break.

In the last sixteen defending champions Árdscoil Rís, Limerick saw off the challenge of Scoil na mBráithre Rathluirc (4-16 to 1-7) and they are be joined in the last eight by De La Salle College, Waterford who beat Blackwater Community School, Lismore (1-18 to 0-16). Christian Brothers College, Cork beat St Francis College, Rochestown (3-18 to 3-12) and CBS Midleton got the better of Scoil Na Trionóide Doon (1-15 to 1-12) while St Colman's Fermoy required extra-time to beat St Flannan's Ennis (4-22 to 2-19).

Our Lady’s Templemore won the coveted Munster colleges title once previously (1978). Meanwhile Thurles CBS are seeking their ninth provincial under-18.5A colleges’ title, a title the famed secondary school last won in 2015. Nenagh CBS have never won the Dr Harty Cup. Our Lady's were the last Tipperary school to feature in a final when suffering a defeat at the hands of Árdscoil Rís during the 2016 decider.