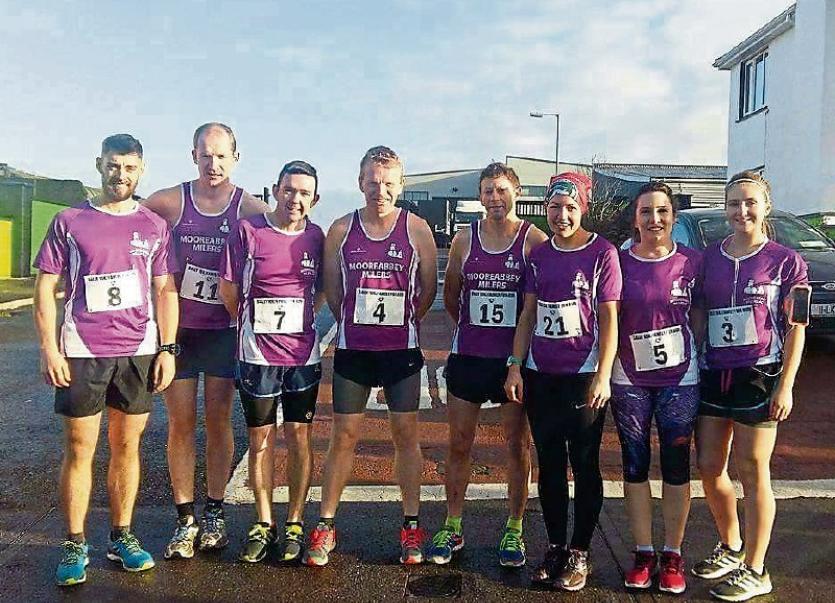 The club hosted our annual Mile Dash road race from the village of Galbally to the ruins of the Mooreabbey. This is a unique event which is growing in popularity year after year. The race was enjoyed by families, friends, walkers and runners both young and old.

On a dry, mild afternoon, 150 people gathered on the Tipperary road in Galbally with just one flat mile ahead of them to run, jog or walk. Among the crowd were runners from as far afield as county Meath and from neighbouring counties Tipperary, Cork and of course Limerick.

The pace was fast at the front and the leaders came into view near the Mooreabbey just four minutes after it started. The club was thrilled to see our own Kieran Lees winning the race in a fine time of 4.48. In second place was James Maher of Templemore AC. Liam Shanahan of Thurles Crokes AC was third.

Catriona Farrell of An Bru AC recorded a hat trick of victories in the Mile Dash. She has been the first lady over the line for the past three years. Her winning time was 5.40. Linda Grogan of Dundrum AC was second and our own Marie O'Shea was third lady.

There was a wonderful atmosphere at the finish line and in the community centre where refreshments were served afterwards. Congratulations to all those who took part in the Mile Dash. We would like to thank all our stewards and helpers on the day. Thanks to Premier Timing Systems who as always delivered very professional race timing and results.

In other news, a group of nine from the club supported the Ballylanders 10k on Stephen's Day. This was held to raise funds for the local playground. Club member Willie O'Donoghue was the first man over the line, Damien Holian was 2nd, Liam O'Donnell was 3rd and Kevin Lenihan was 4th, all from Mooreabbey Milers. Louise Rennie was the 3rd lady. Well done also to Pat Hartigan, Danni Nevin, Paddy Bourke and Caroline Bourke.

Mary Pyke ran very well in the popular Clonmel AC 4 mile road race on St. Stephen's Day. Over 500 runners took part and Mary finished in just over 30 minutes. Michael Cunningham was 1st in his category at the Caherdavin 5k on December 26th. He ran in the Killaloe 10k on New Year's Day. Willie O'Donoghue was 3rd in the Boherbue 5k in County Cork last Tuesday 27th. Tom Blackburn got the new year off to a winning start in the Doon 5k on January 1st. Tom was first with our own Willie O'Donoghue in 2nd place.

Mooreabbey Milers AC would like to take this opportunity to congratulate all members on their achievements in 2016 and hope that for a successful 2017 for all.

Club registration for 2017 will take place in the coming weeks.

Our AGM will be held on January 12th.