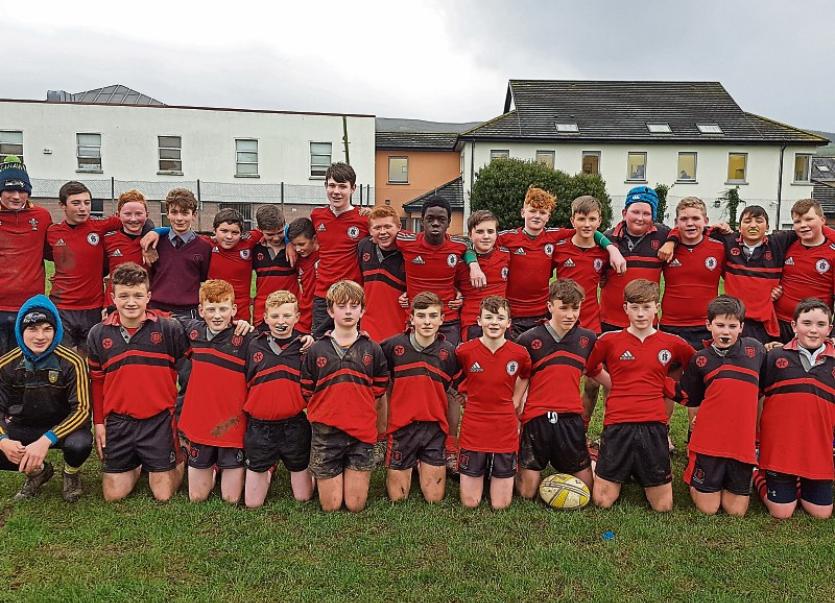 The much anticipated showdown between the two Clonmel High School sides 'Jingle Bells' and 'Santa's Elves' brought the curtain down on the school's rugby activity for 2016 with the Bells running out 41-36 winners.

Jingle Bells kicked off landing the ball deep into Santa's Elves' half.

Straight away the pressure was on. The ball quickly found its way back into the Bells' possession. A strong steal by Adam Cunningham led to a line break from Dean Moroney but a combined effort from Harley Joy Horan and Lekan Oki stopped him in his tracks.

The strength in the Elves' forwards helped them to ruck their way towards the line but with a massive effort from the Bells' pack, the ball was turned over and spread quickly out the line to Lekan Oki who was waiting on the wing to run the length of the pitch to score beneath the posts where it was converted by Bells' out-half James Morris leaving the score 7-0.

The first scrum, ten minutes into the match, was won by the Elves but turned over in a following ruck allowing for a line break by Jack Mulcahy which shook the defence just enough to disorganise them for a split second. Emre Yasar weaved his way through the defence to run to score beneath the posts to be converted once more by Morris. Shortly after the restart the Elves were on the attack and working hard to make ground and retain possession. Sure enough, as a result of the skilled hands and fast feet, a true team try was slipped past the Bells' defence to the left of the posts by Fergal Gaughran, giving Harry Lane his first kick at the posts which he successfully put over to narrow the Bells' lead to seven points again.

Following a scrum, the Bells swiftly passed the ball all the way to the far wing. Captain Rory O'Dowd, the fullback took on the ball making massive ground only to be taken down by Christopher Sheikh just meters before the line where he was put into touch. A lineout won by the Jingle Bells led to a strong drive from the pack that sucked in the Elves' forwards allowing Adam Cunningham to make it over the line in the far corner. The kick fell short as it was a massive distance out from the posts.

Moments before halftime a penalty was awarded giving the Bells' James Morris the opportunity to run in a final try before the halftime whistle leaving the score at 17-14 to the Jingle Bells .

The Elves kicked off to begin the second half and it was received well by Bells' winger Emre Yasar who took it upon himself to bring it into contact but after not releasing the ball on the ground a penalty was awarded to the Elves.

The ball was taken on by Tommy Kiely and offloaded to Adam Cunningham who took it at pace levelling a small chunk of the Bells' defence before being brought down inches before the line.

Out of nowhere came Tommy Kiely to make the final push to ground the ball over the line leaving the score 19-17 to the Bells.

The kick fell short due to the great distance. An exciting phase of play broke out when a kick ahead to Lekan Oki looked to have opened up a try opportunity but was knocked on at the last second leaving the Jingle Bells' defence scattered allowing for the Elves full back and captain Emmet Butler to pass the defence untouched running in their fourth try, the third of which to be converted by Harry Lane .

Santa's Elves fought back and fast feet in the backs looked like a try waiting to happen.

However, unfortunate stray passes and spillages left the ball open to be picked up by the Bell's eight Rian McCormack who ran in his first try of the match with almost no resistance at all followed soon after by a second for McCormack.

The Elves had possession and decided to give it to Emmet Butler who would again threaten to jingle the Bells' defence with his dangerous attacking play. He made ground up the field before leaving it to the forwards to clear the rucks.

Scrum half Jack O' Donoghue fed it out to Dean Moroney to plough through the final line of defence earning his team a much deserved try.

After this boost they were prepared to go again and finish out the match on top but just as they looked most dangerous, a lucky intercept by Rian McCormack took everyone by surprise leaving the Elves scrambling but all efforts fell short as he made his way to the line for his third try of the match which was not converted which was followed soon after by his fourth.

Harry Lane won possession for the Elves and passed to young Fionn Hallinan and he bravely threw himself at the line scoring a last truly great team try.