Liam Kearns: ‘We got our backsides spanked by an under-21 team’ 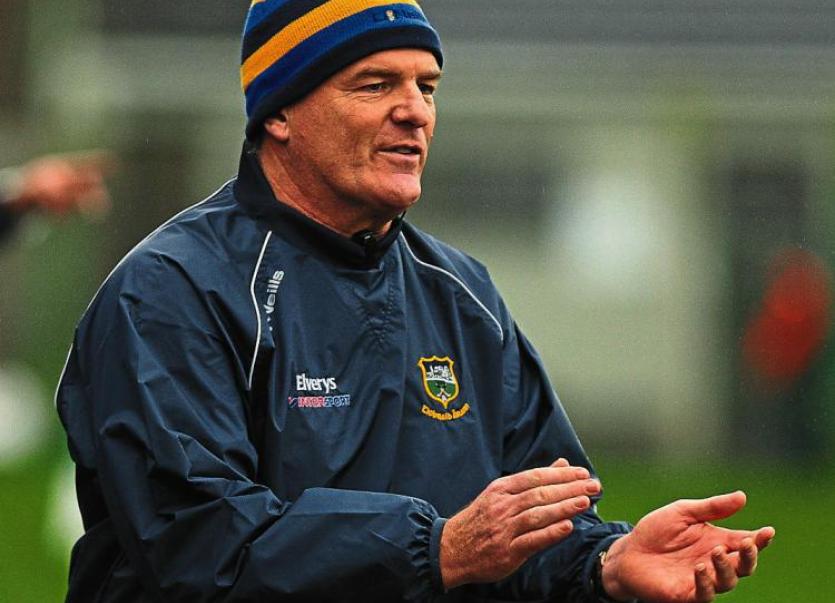 Senior football manager Liam Kearns was not prepared to accept any excuses for the performance of his Tipperary team on Sunday afternoon in Austin Stack Park, Tralee - the Premier County lost the opening round of the McGrath Cup to hosts Kerry by 14 points (1-3 to 3-11).

“We got our backsides spanked by an under-21 team so perspective is perspective,” Liam Kearns exclaimed in a matter-of-fact manner when the context associated with this encounter was put to the Tipperary manager.

On Sunday Tipperary faced a Kerry team managed by Jack O’Connor (under-21 manager) while senior supremo Éamonn Fitzmaurice watched from the stands. The idea here, from a Kerry point of view, was to field the home side’s under-21 team and use the contest as preparation for the provincial championship. Tipperary, in an emotional, mental or physical sense, were just not ready to face a Kerry side who are, for all intents and purposes, ready for championship action.

“They are favourites for the All-Ireland at under-21 (level) and they have a lot of work done. Kerry are at championship pace and I accept all that, but, still, we had four or five of our lads who played in an All-Ireland semi-final on the field. They probably stood out, but for the younger fellas it was probably a fair eye-opener I would say,” Liam Kearns told the Tipperary Star.

“In fairness the boys have given me a rod now to use on their backs. And, I will be using it. You can’t hide away from that - that was a trouncing out there,” Liam Kearns said.

“We know now that we have a lot of work (to do) before the start of the league - it’s on the fifth of February and it is in less than a month’s time. We have to get out onto the training ground now and really work on our fitness levels to get ready for that,” Kearns insisted.

“We were comprehensively out-played - they were sharper, fitter and a way more organised team than we were which was what I was afraid of coming up here to be honest. I was hoping that we would be a little bit better than that, but we were not. That’s where we are at now and in fairness to them they were very impressive. I will try to kill some of the hype for Jack (O’Connor), but he will have a bit of a problem killing the hype after that. I don’t think they should get too carried away because we just do not have the work done. I think that was obvious enough,” Kearns added.

“They cleaned us in the middle of the field in the first half and even on our own kick-outs. We would pride ourselves on winning our own kick-outs against senior teams, but we didn’t have any work done on it. In fairness to the (Kerry) under-21s you could see that they had their kick-outs well-rehearsed. They were winning all of their kick-outs and they were putting us under massive pressure for ours. They basically had us at both ends. And, then they were fast and they were spreading it wide. I thought they were well-drilled and you would have to be impressed with them,” Liam Kearns said before his thoughts turned to a handful of Tipperary players who had acquitted themselves quite well given the circumstances.

“Kevin Fahey played very well I thought and Diarmuid Foley did okay. Robbie Kiely I thought was outstanding at centre-back - he was holding us together there for a long time. Unfortunately, we have picked up a couple of injuries now as well that we could have done without,” Liam Kearns said before revealing that Paddy Codd and Colm O’Shaugnessy both suffered hamstring injuries.

“To be honest I can’t understand why we are playing a game again in three days’ time,” Liam Kearns said.

“There are only six teams in the competition. If they played it every Sunday it would be finished before the league. The premise of any competition is that every team gets treated the same and what we have now is that one team has seven days rest in both groups and two of the teams have to play within four days of each other. The final of it is not on until the 22nd (of January); that’s still two weeks away from the league.

“You can see the shape that we are in - for us now to go out and play a second game; overload is the biggest cause of injury. There is every chance that we could pick up another couple of injuries now on Wednesday night and that’s the last thing that you want. The idea of a preparatory game in the McGrath Cup is that you come through it without too many injuries. I am a bit disappointed with that to tell you the truth,” Liam Kearns added.

Although established senior players like Michael Quinlivan, Kevin O’Halloran, Alan Campbell and George Hannigan will not be available for selection on Wednesday night Bill Maher is expected to make his return to the side while the clash with Cork represents an opportunity for others to impress ahead of the league campaign.

“We have to let the other lads go out there and play. Your problem there was that you were up against an almost-ready championship team with a lot of work done playing against a team that were just starting from scratch. I would be hoping that Cork would be something similar to ourselves - they might be a bit ahead of us because we are obviously behind. Now I have to say that Westmeath came down and gave us a good lesson as well in a challenge game last week. They have a lot of work done too. They only beat us by four points, but they should have beaten us by a lot more.”

Following the game on Wednesday night Tipperary will turn their thoughts to their up-coming division three league campaign which kicks off with a home game against Antrim in Clonmel on Sunday, February 5th.