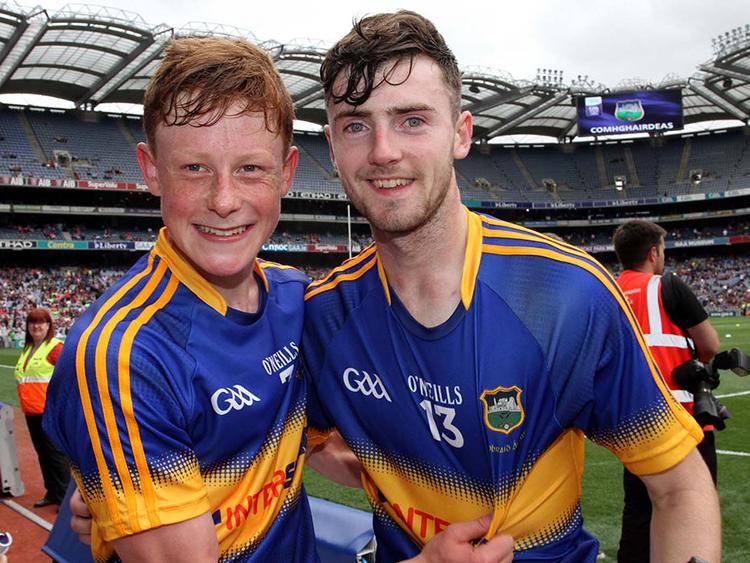 Nenagh CBS survived the challenge of a ferocious De La Salle, Waterford team at Leahy Park, Cashel on Wednesday last when the side led by Niall Quigley, Dermot Brislane and David O’Neill required extra-time to book their spot in the last four of the Dr Harty Cup.

Despite surging into a 0-9 to 0-1 lead inside the opening 16 minutes Nenagh CBS struggled thereafter to deal with a De La Salle team who, once they had settled into their sweeper system, dominated for prolonged periods and led 2-11 to 0-16 in the third minute of injury time. Playing into the teeth of a gale Nenagh CBS looked doomed, but, just then, second half substitute Kevin McCarthy eluded the attention of three would-be tacklers before flicking over an equaliser. Nenagh CBS seized the initiative in extra-time with three points from Jake Morris, now re-located to the forward division, helping to fire the Tipperary side into the last four.

The performance of Jake Morris caught the eye on occasion, as did that of Kevin McCarthy and the hard-working Billy Seymour, but the key man here and the most obvious candidate for the man of the match award had to be Jerome Cahill. The Kilruane man notched two points from midfield, but made his most telling impact when assigned to mark De La Salle danger man Thomas Douglas who had notched 2-4 from play and, generally, managed to terrorise the Nenagh CBS defence.

Smarting from a defeat suffered at the hands of De La Salle in the 2016 quarter-finals Nenagh CBS made an enthusiastic start to this contest. Indeed, Jake Morris strode forward as early as the third minute to land a smart right-hander. Jerome Cahill converted another opportunity soon after before Conor Giles Doran opened the De La Salle account in the sixth minute.

Jake Morris drilled over a long-range free before points from Mark Daniels (two, one free), Eoin Power, Billy Seymour, Jake Morris (free) and Jerome Cahill left eight between them (0-9 to 0-1) with just 16 minutes played. Billy Seymour featured prominently during this period at wing-forward while Jerome Cahill’s cross-field delivery during the build up to Seymour’s 12th-minute point was something to savour on a bitterly-cold afternoon in Cashel.

De La Salle needed to make a stand and did so. Despite playing into a strong wind Thomas Douglas brought 12 minutes without a score to an end for the Waterford lads before a terrific Dylan Finn snap preceded a scrambled finish from Douglas in the 21st minute.

That three-pointer cut Nenagh CBS’ lead to four before Bryan McLoughney fired over a classy effort following neat work from Mark Daniels. Thomas Douglas, who was enjoying his afternoon, sold a terrific dummy before landing his side’s third point of the afternoon. Indeed, Douglas threatened a second goal in the 26th minute, but Jerome Cahill tracked back just in time to hook the De La Salle man.

De La Salle were asked to scramble a late Jake Morris free which dropped short off their own line while a Mark Daniels free brought the opening half to a close (0-11 to 1-3).

Considering the strength of the prevailing wind Nenagh CBS needed to make an enterprising start to the second half and they did so with points from Ruairí Maher and Bryan McLoughney. The unselfish work of Billy Seymour during the build-up to the Maher strike was especially impressive (0-13 to 1-3).

De La Salle steadied themselves with a Harry Redmond effort before Thomas Douglas shook off two tackles en route to delivering a left-handed finish in the 35th minute (0-13 to 2-4).

Mark Daniels and Harry Redmond then traded placed balls before Conor McCarthy set up Bryan McLoughney for a super point in the 50th minute.

De La Salle, however, held the upper hand during the closing stages. Indeed, three terrific points - which came courtesy of Cian Wadding, Darragh Walsh and, of course, Thomas Douglas - tied the game with six minutes to play. De La Salle, deservedly, took the lead in the 56th minute when Seán Carton created the room for the wind-assisted Darragh Walsh to land the lead score from long-range (2-11 to 0-16).

With Nenagh CBS struggling badly the Tipperary side needed a hero and found one in the shape of Kevin McCarthy - the up-and-coming Toomevara star wriggled his way forward in the 63rd minute before flicking over the equaliser.

De La Salle enjoyed one final attack of note, but goalkeeper Shaun O’Brien actually found his opposite number (Barry Hogan) with a puck-out which landed on the Nenagh CBS line - an extraordinary moment (0-17 to 2-11).

Despite playing into the wind in the opening half of extra-time Nenagh CBS stole into a vital lead when Jake Morris edged his side ahead. De La Salle responded through Darragh Walsh, but a stalemate of sorts ensued thereafter and the sides retired all square at the break.

Immediately after the interval Jake Morris was fouled for a free which the Nenagh Éire Óg man converted before Ruairí Maher conjured one of the moments of the game when the left-handed ‘Mines man by-passed the De La Salle sweeper with a delicious stick pass and picked out Jake Morris. The Éire Óg man tricked to his left before turning onto his right and landing the winner for Nenagh CBS.

Although there were still nine minutes to play Nenagh CBS had now established a vital buffer between the sides. A late Cormac Power effort reduced the deficit to one, but De La Salle failed to create a final opportunity of note which could have rescued the situation from a Waterford point of view.

Nenagh CBS will now take on Our Lady’s Templemore in the Dr Harty Cup semi-finals - on Wednesday afternoon in The Ragg Our Lady’s impressively beat Thurles CBS 3-14 to 1-10.

Meanwhile defending champions Árdscoil Rís, Limerick fought out a draw with CBS Midleton in Bansha after extra-time (1-15 to 2-12). The winner of the replay will take on Coláiste Cholmáin, Fermoy in the last four. St Colman’s beat Christian Brothers College 3-12 to 1-12 in their respective quarter-final.

The semi-finals are scheduled to take place on January 28th and the Dr Harty Cup final is pencilled in for Saturday, February 18th.

Our Lady’s Templemore won the coveted Munster colleges title once previously (1978). Meanwhile Nenagh CBS have never won the Dr Harty Cup. Our Lady's were also the last Tipperary school to feature in a final when suffering a defeat at the hands of Árdscoil Rís during the 2016 decider.