Ursuline and Pres' set to rumble in Colleges camogie final

Thurles schools are all set for pitch battle in Templetuohy 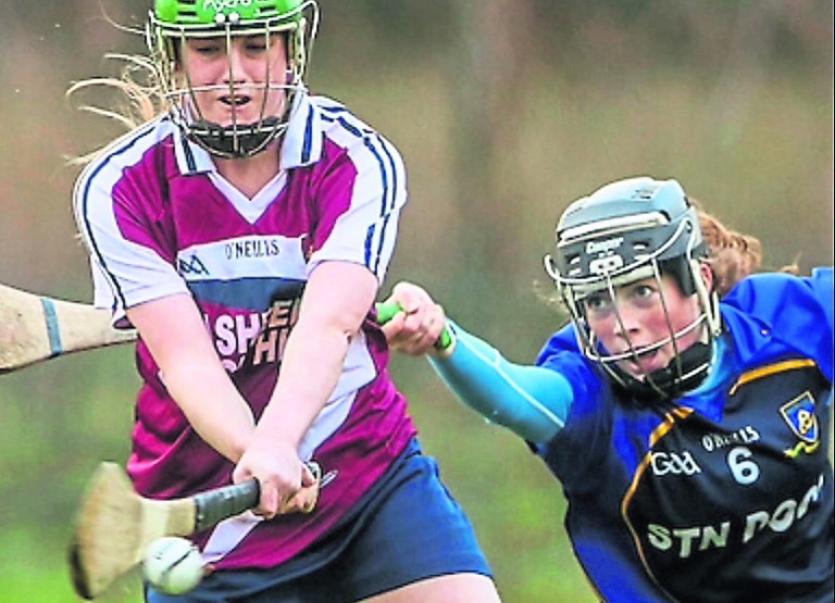 Casey Hennessy in action for the Presentation Secondary School Thurles.

One of the great school rivalries of our time will be played out on the camogie pitch on Sunday when Thurles schools, Ursuline Secondary and Presentation Secondary fight for the title of Munster Colleges Senior A Camogie champions in Templetuohy.

Sunday afternoon next will be a red letter day in the locality when it comes to the game of camogie with the Presentation Secondary School , Thurles and the Ursuline Secondary School clashing in the final of the Munster Colleges Senior A Final for the first time ever.
The game gets underway in Templetuohy at 2:00pm and it is anticipated that there will be a huge attendance at the game, given the great rivalry between the two schools over the years .... although that rivalry has rarely been witnessed on the camogie fields.
The two Thurles schools are renowned for sporting and academic excellence, but it is only in recent times that camogie has taken a firm hold despite the very successful teams Tipperary have down through the years, but particularly in the early years of the millennium.
It has taken some time to take off, but camogie is in a very strong position now in Tipperary and participation in the primary schools has certainly helped to create a supply chain for the secondary schools who are doing more than playing their part in the overall process.
So, the Pres' and Ursuline will rumble in the final and it is very doubtful if any other rural town in the country could end up having two rival schools in the provincial A senior final - take a bow both schools before ever a ball is pucked.
There are players on both teams from all over the country, thanks to the inclusion of full-time and day boarders, and apart from having the chance of winning the provincial crown, the victors will also go on to the All-Ireland semi-final where they wil play the Ulster champions, and would have a very real chance of making it to the All-Ireland Final.
For now though, neither management team or players are looking beyond Sunday afternoon - an occasion which will command utmost concentration all-round before a victor emerges. Indeed, such will be the intensity of the rivaly that any any perceived advantage or favourites tag will go out the window completely - Ursulines, alongside Doon, would have been the popular favourites to lift the silverware at the start of the campaign - the Pres' beat Doon in the semi-final though to set up this mouth watering final.
The Presentation, with Coaches Cian Treacy and Barry Ryan, came through against Scoil Mhuire, Carrick-on-Suir, Colaiste Colm from Ballincollig, Cork and then Doon, in their own backyard - a significant scalp indeed considering the level of support Doon had on the day.
The Pres' girls will be looking to the likes of Nenagh's Hazel McAuliffe and Drom-Inch's Mary Burke - both of whom All-Ireland minor medals with Tipperary in 2016 - while Niamh Ryan of Drom Inch and Kilkenny senior panelist Grace O'Donnell of Young Irelands will be others to watch out for. Into the mix also will be Irish soccer international Sarah McKevitt, and incidentally quite a few of the Pres' team won the FAI Senior Ladies Schools National Championships last year as well.
“We are expecting a great contest on Sunday and it is great for the game of camogie in this region to have the two schools in the final. I don't know if that has ever happened in any other town, but it is a very big achievement,” Pres' coach Cian Treacy said.
His counterpart in the Ursuline, Olivia Hogan added, “A lot of people are looking forward to this final because in lots of cases you have clubmates playing against each other. That has resulted in a lot of interest and we are expecting it to be a very tight contest. The Presentation would have more senior A experience than us, but we are really relishing the challenge.”
Ursuline defeated Scoil Mhuire, Carrick-on-Suir in the semi-final having accounted for St Flannan's of Ennis and Laurel Hill of Limerick in the earlier rounds. They have been gaining momentum all along and with quite a number of 6th year students in their ranks, they are well up to the age for the championship.
Olivia is joined on the sideline by Eimear O'Friel and they will be hoping to steer their charges to an historic first ever title in the Munster Colleges senior A championships where they will look to Caoimhe Burke, Maureen Ryan and Eimear Lukeman for inspiration.
The game gets underway at 2:00pm in Templetuohy. Come in time, is the advice.