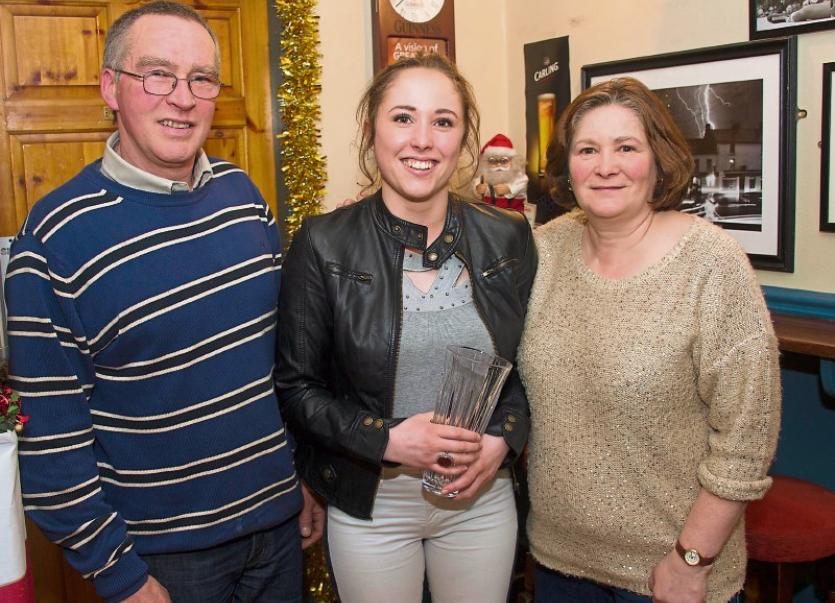 The winner of the Butler’s Bar Fethard Sports Achievement Award for December was Aobh Ní Shé, daughter of Helena and Martin O’Shea from The Valley.

This Fethard lady, currently studying in Dublin, not only won two Judo All Ireland titles in December but has also become UCC’s first ever female black belt. The December award was presented by Anne Marie Butler at a special function in Butler’s Bar on Friday night, January 6. Aobh will now join the other monthly winners for the 2016 Annual Award presentation which takes place on next Friday night, January 13, at Butler’s Bar.

The mentor of the month award was awarded to Sandra Ryan, originally from Woodvale Walk, Fethard, and now living in Australia. Sandra has also reached a significant milestone in her Australian Football League (AFL) career by playing her 100th first team game.

The presentation of the fourth annual Butler's Bar Sports Achievement Award will take place on Friday night next, January 13, at Butler’s Bar and all are welcome. The Achievement Awards competition is open to any nominated sports people who live, work, or from the Fethard & Killusty parish. Anyone can nominate a person or group from any sport either directly to any of the steering group, Butlers Bar or through our Facebook pages. The format for the competition is that a monthly winner is selected from amongst all the monthly nominees and these winners all progress to the grand final which, this year, takes place on this coming Friday night, January 13.

Friday night next promises to be one of the highlights in Fethard’s social calendar with proceedings getting under way at about 9pm with a cheese and wine reception. A surprise guest is expected on the night.