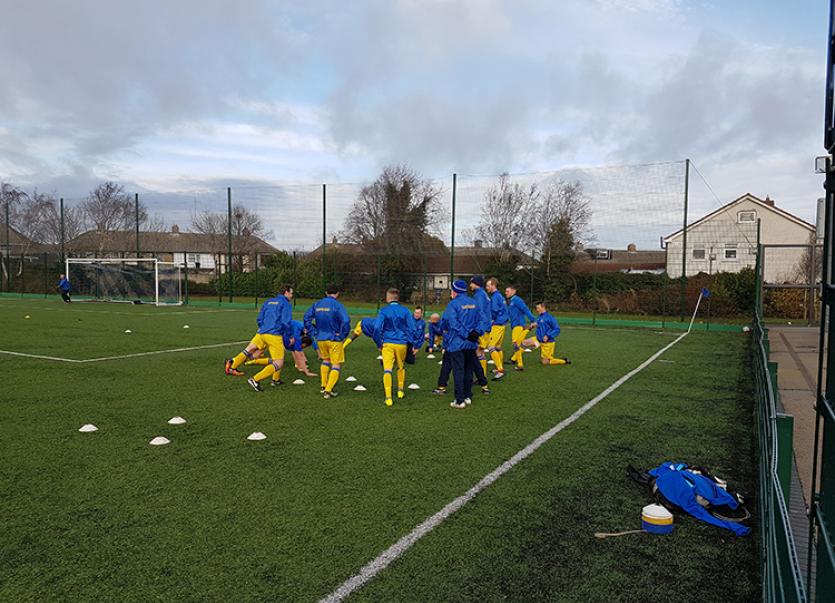 Thurles Town pictured warming up in Crumlin on Saturday afternoon,

A spirited Thurles Town lost 4-1 away to the famed Crumlin United in an FAI Junior Cup sixth round clash played at Pearse Park, Crumlin on Saturday afternoon. Following this defeat, which was suffered at the hands of a renowned Leinster Senior League club, Thurles manager Noel Byrne said that he would be interested to see how his team reacts to such a set-back. If this contest is anything to go by, however, this Thurles Town team is made of the right stuff.

Thurles started this game (which was played on a tricky artificial surface) well before conceding three break-away goals in a devastating seven-minute period. To their credit Thurles Town responded really well and dominated the remainder of the half before scoring a smashing free kick to leave it 1-3 at the break.

The Thurles challenge did unravel a little after the break, but the side’s collective show of grit should stand to Town. Indeed, Thurles will hope to draw on such spirit next weekend when Noel Byrne’s side travel to Clare to face Shannon Hibernians in the fourth round (last 32) of the Munster Junior Cup.

And, although Thurles’ 100% record has now come to an end in all competitions Town are superbly-positioned to win the club’s first-ever league title.

Right now Blackcastle Templemore Harps lead the North Tipperary & District League Premier Division with a game to play. BT Harps are five points clear of Town, but Thurles have five games in hand and six games to play. That is some transformation considering the fact that Thurles Town found themselves bottom of the division 18 months ago.

Thurles Town started well and must have been encouraged in the third minute when Michael Comerford’s free kick clipped the Crumlin United bar following a foul on over-lapping full-back Stevie Coppinger. Indeed, Thurles looked comfortable, that is until Crumlin counter-attacked in devastating fashion to score break-away goals in the 12th, 16th and 19th minutes (0-3).

Noel Byrne’s side responded really well to the unfortunate situation which they found themselves in. Barry Ryan saw a header cleared off the line in the 22nd minute before a Michael Comerford fee kick found the head of Paul Kirwan a minute later, but Kirwan’s finish flew narrowly over the bar.

Finally, in the 33rd minute, Thurles Town were rewarded for their enterprising approach to this contest. Following a foul on Paul Kirwan on the edge of the Crumlin area Michael Comerford fired the resultant free kick into the bottom left hand corner.

Seventeen minutes into the second half Stevie Coppinger reacted to a wild challenge from a Crumlin United player and was shown a straight red card - six minutes later a Crumlin centre-forward was also sent off for an elbow on outstanding Thurles Town centre-half Aaron Ryan.

Thurles Town’s dreams of fighting their way back into this contest were dashed in the 70th minute when Crumlin United scooted down the field to score their fourth break-away goal of the afternoon.

"In the first ten or 15 minutes we looked comfortable. We hit the crossbar and we were unlucky not to go one up. Then they got a very good goal when the ball was whipped in from the right and their man got a header on it at the near post. I still was not worried, but in quick succession they got two deflected goals that left our 'keeper flat-footed,” manager Noel Byrne told the Tipperary Star - Byrne is joined on the management team by assistant manager Willie Mulcaire and coach Joe Brophy.

“The lads showed great character; they kept working at it and got a well-deserved goal back. It possibly could have been 3-2 at half-time and when we were talking at half-time in the dressing room we were confident of getting back into it. We said that if we could get it back to 3-2 we would win it. That didn't happen and we had the sending off which changed things a small bit,” Noel Byrne added.

In reaction to the sending off of left-back Stevie Coppinger Noel Byrne said: “I think he deserved to go. I really do, but I also think that one of their lads should have went earlier. But, look, these things happen. You are up here playing on an artificial surface. I think it was a massive factor. It was really massive. In general, and right across the board from start to finish, I think the pace that the ball takes off of that surface is extraordinary.

“I have seen a lot of all-weather pitches or whatever you want to call them, but I have never seen anything as lively as that. But that's the way football is going - we have to embrace it and get on with it,” Noel Byrne said.

“I don't know if you could call it sour grapes or not, but I just thought the officials were scandalous today. I don't think they helped the situation either. It is what it is now. We must dust ourselves down. It is our first defeat since around April or May in all competitions. We will see how the lads react to it. We will see next Sunday when we go down to Shannon in the Munster Junior Cup. We are on the road again next weekend, but it is on a proper pitch this time," Noel Byrne added.