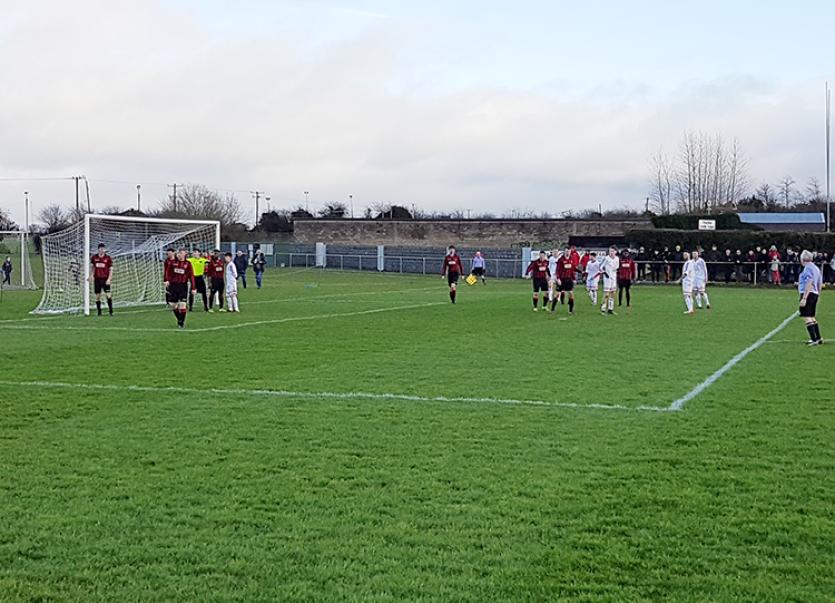 A double from Pippy Carroll earned a famous 2-1 FAI Junior Cup sixth round win over Cherry Orchard for a classy Peake Villa side at Loughtagalla on Sunday afternoon.

Peake Villa were superb in this contest with their sophisticated team structure and slick approach play causing Cherry Orchard problems right from the off.

Although Villa were good value for this win in the last 32 of the prestigious FAI Junior Cup ‘keeper Stephen Ryan was asked to make a couple of telling saves. Martin Fogarty, Alan Leahy and Seán Wade were outstanding at the back while the combination of Gary Lyons, Keith Cahill and Maris Baltins dominated midfield. On the flanks Michael Wade and Dale Loughnane ran themselves to a standstill, as did the tireless Mathew McKevitt up front while the form of Pippy Carroll caught the eye in a man of the match display.

Villa carved Cherry Orchard open as early as the 12th minute when Gary Lyons’ through ball sprung the offside trade, but the Orchard ‘keeper got off his line smartly to smother an opportunity for Mathew McKevitt.

Seven minutes later Villa’s Stephen Ryan got down well to his left to save before a Keith Cahill nutmeg in the middle of the field preceded another half chance for Mathew McKevitt. Once more the Cherry Orchard ‘keeper’s starting position made the telling difference and McKevitt was denied another opportunity.

Cherry Orchard looked dangerous on set pieces and asked Stephen Ryan to make another good save in the 40th minute, but Peake Villa looked the more accomplished outfit and were denied, once more, by the Cherry Orchard ‘keeper in the 46th minute. On this occasion Pippy Carroll sent Dale Loughnane away down the left flank; Loughnane skipped over one despairing challenge before his cross found Mathew McKevitt. The centre-forward made a good connection, but was denied by a terrific save.

During the opening minute of the second half Gary Lyons sparked a move which saw Michael Wade skin his man and deliver an inviting cross, but Pippy Carroll and Mathew McKevitt failed to make a telling connection.

Finally, in the 47th minute Pippy Carroll swiveled in the Cherry Orchard box before beating the ‘keeper with a looping effort.

Nine minutes later Keith Cahill, who was an absolute ball of energy in the middle of the field, found the head of Seán Wade with an inch-perfect corner - unfortunately Wade’s thundering header cracked off the Cherry Orchard crossbar.

Peake Villa extended their lead in the 57th minute when Cherry Orchard half cleared Keith Cahill’s corner and Michael Wade was fouled for a penalty which Pippy Carroll fired into the bottom left-hand corner.

Cherry Orchard scrambled home a goal in the 68th minute and the Dubliners pressed hard for a late equalizer. Cherry Orchard created two notable opportunities during the final quarter, but were denied by a smart save from Stephen Ryan and a brave block from Seán Wade.

Peake Villa enjoyed a couple of notable opportunities late in the game, but the hard-working Mathew McKevitt was denied by some last gasp defending. On another day the relentless McKevitt could have scored a hat-trick.

“It’s a great day for the club. We are delighted. The club has been in the semi-finals before, but it has been a while. The tradition is there and the history is there, but this is a young side and if this group stays together they could be here every year,” player-manager James O’Sullivan told the Tipperary Star in the wake of this superb win against one of the favourites to win the competition outright.

In 2017 Peake Villa celebrate the club’s 50th anniversary (formed 1967) and if the style of Sunday’s win over the renowned Cherry Orchard is anything to go by this Thurles outfit could find themselves celebrating more than an anniversary.

“From pre-season we have had 40-something players up here three nights a week training - even on Wednesdays and Fridays over Christmas the numbers we were getting was phenomenal. So, the commitment is there. There are lads who want to play and when you have that you get the results on the pitch,” James O’Sullivan explained.

“The club is great. You saw it today - the crowd that was here was unreal. The work that the committee put into it is brilliant. The pitch was looking great and the club house - we have all the facilities here. All we need now is to start winning a bit more. It may not be this year, but we are going along the right path.”

The games are coming thick and fast for Peake Villa right now. Last week Peake Villa required a James O’Sullivan goal in extra-time to beat Clonmel Celtic, on Sunday they hosted Cherry Orchard in the sixth round of the FAI Junior Cup and next weekend they face St Michael’s in the fourth round (last 32) of the Munster Junior Cup.

“It doesn’t really stop for us, but if you are winning games those are the kinds of competitions that you want to be in,” James O’Sullivan said.

“It’s a fantastic turnaround from where we were last year. St Michael’s next week will be a huge test. We will see how we will go. We will gather again - we will train Wednesday and Friday. We won’t change anything and hopefully the lads will do the job out on the field. The players don’t stop and they don’t settle for second place. They have changed their mentality from just turning up here on a Sunday to becoming winners. That’s the huge difference.”

Peake Villa will now be included in the draw for the last 16 of the 2016-17 FAI Junior Cup - the Thurles outfit are the only Tipperary team to reach this stage of the competition. Tipperary clubs, however, do have form in the FAI Junior Cup with Clonmel Town winning the coveted prize in 1994 and St Michael’s taking the honours in 1974 and 2014.

The Peake Villa campaign also featured a notable victory over North Tipperary & District League champions Nenagh Celtic in the third round. Goals from Pippy Carroll and Adam Garrett sealed that result. Now just three wins separate Peake Villa from competing in the final of the FAI Junior Cup which is, of course, scheduled to take place in the Aviva Stadium, Dublin next May.

Peake Villa, besides their interest in the FAI Junior Cup and the Munster Junior Cup, are also hot on the heels of Clonmel Town and St Michael’s in the Tipperary South & District League Premier Division.