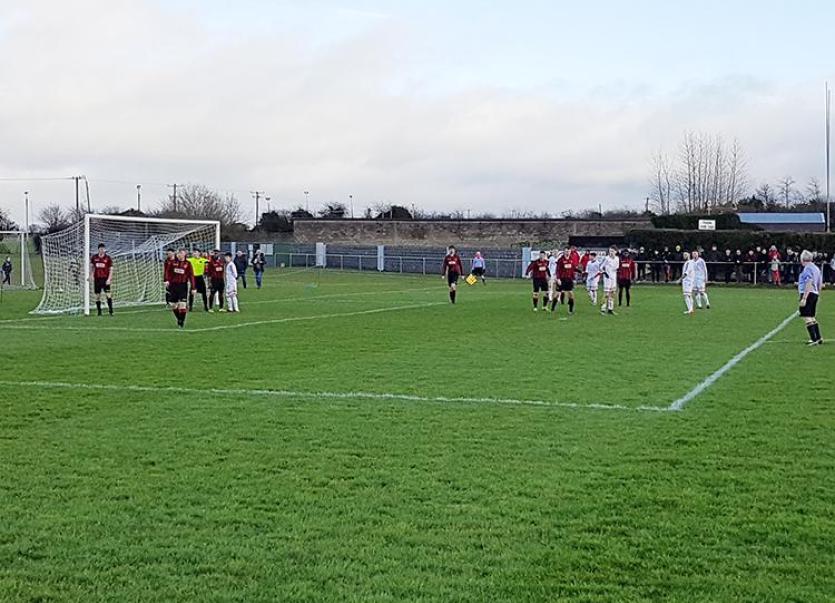 There were mixed fortunes for the respective Thurles teams in the sixth round of the FAI Junior Cup last weekend.

A double from Pippy Carroll earned a famous 2-1 FAI Junior Cup sixth round win for a classy Peake Villa side at Loughtagalla on Sunday afternoon.

Peake Villa were superb in this contest with their sophisticated team structure and slick approach play causing Cherry Orchard problems right from the off. For a full report and reaction from this clash please click here.

Meanwhile on Saturday a spirited Thurles Town side lost 4-1 away to the famed Crumlin United in an FAI Junior Cup sixth round clash played at Pearse Park, Crumlin.

Following this defeat, which was suffered at the hands of a renowned Leinster Senior League club, Thurles manager Noel Byrne said that he would be interested to see how his team reacts to such a set-back. If this contest is anything to go by, however, this Thurles Town team is made of the right stuff. For a full report and reaction from this game please click here.

On Saturday afternoon Cashel RFC lost out to Young Munster in the semi-final of the Munster Senior Cup, but the quality of the Cashel performance would suggest that the Tipperary side is ready to make an impression on division 2A of the Ulster Bank League.

Cashel RFC took a 10-6 lead into the break at Spafield on Saturday, but Young Munster recovered to force extra-time (13-13) before a Shane Airy drop goal propelled the Limerick men into the provincial final against Cork Constitution (16-13).

This was a stirring display from a Cashel side who, right now, find themselves second from bottom in division 2A of the Ulster Bank League. And, the West Tipperary side will hope to carry such form into their crucial clash with Queen’s University on Saturday, January 21st (2.30pm).

At the half-way point of the Ulster Bank League Nenagh Ormond lead division 2A (a point clear of Banbridge), but Nenagh face a tough trip to Stradbrook in Dublin on Saturday to face Blackrock College RFC (2.30pm) who will, no doubt, be itching to avenge a heavy defeat suffered at the hands of Ormond prior to the Christmas break.

On Sunday, January 22nd high-flying Clonmel travel to take on the Cobh Pirates, Kilfeacle & District pay a visit to Galbally and Clanwilliam face St Senan’s in Clare (all three games start at 2.30pm).

In division two of the Munster Junior League Thurles RFC promotion prospects suffered a blow when losing 20-26 away to Castleisland. Thurles trail league leaders Waterpark by nine points and now face into a crucial home tie on Sunday, January 22nd when they take on third-placed Youghal at 2.30pm. We are sure that Thurles RFC would appreciate your support on that occasion.

On Sunday afternoon Ursuline Secondary School, Thurles came out on top (0-6 to 0-5) in a hard-fought battle with neighbours Presentation at Templetuohy to claim the school’s first-ever Munster Senior A Colleges title.