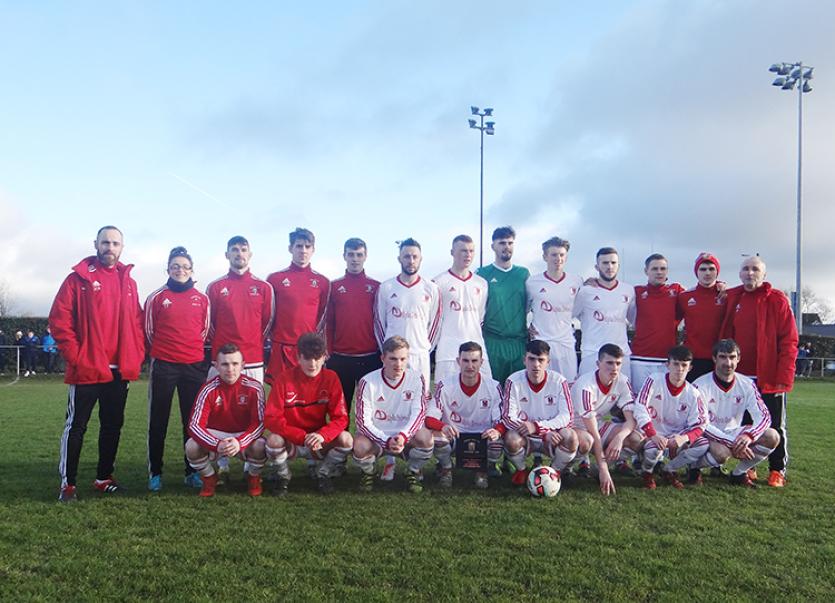 The last 32 of the Munster Junior Cup takes place next weekend with six Tipperary league clubs involved while the respective league title races are heating up across the county.

The clash of Tipperary South & District League rivals Peake Villa and St Michael’s in the fourth round of the Munster Junior Cup is sure to attract a crowd at Loughtagalla, Thurles on Sunday, January 22nd (2pm).

The last 32 of the provincial competition takes place next weekend. Tipperary Town will make a trip to Waterford to face Dungarvan United and Thurles Town are also away in Clare against Shannon Hibernians.

The clash between Peake Villa and St Michael’s, however, will catch the eye of neutral observers.
Both clubs are in contention at the summit of the Tipperary South & District League and although St Michael’s have already made their exit from the FAI Junior Cup at the hands of Usher Celtic no one would bet against a side managed by James Walsh. Indeed, St Michael’s won 2-0 away at Clonmel Celtic last weekend to keep the pressure on league leaders Clonmel Town.

Right now, however, it could be argued that Peake Villa are the form side in the TSDL.

Although Thurles Town’s FAI Junior Cup campaign was brought to an abrupt end on Saturday when the side managed by Noel Byrne lost 1-4 away to Crumlin United in Dublin on Sunday in Loughtagalla a double from Pippy Carroll helped to earn a classy Peake Villa side a famous 2-1 FAI Junior Cup win over one of the competition favourites Cherry Orchard.

Peake Villa were superb in this contest with their sophisticated team structure and slick approach play causing Cherry Orchard problems right from the off.

Peake Villa now find themselves in the last sixteen of the prestigious national competition as well as figuring in the concluding stages of the Munster Junior Cup and, of course, James O’Sullivan’s side are also in the picture for the TSDL Premier Division title.

In 2017 Peake Villa will celebrate the club’s 50th anniversary (formed 1967) and if the style of Sunday’s win over Cherry Orchard is anything to go by this Thurles outfit could find themselves celebrating more than just an anniversary this season.

Peake Villa will now be included in the draw for the last 16 of the 2016-17 FAI Junior Cup - the Thurles outfit are the only Tipperary league team to reach this stage of the competition.

Tipperary clubs, however, do have form in the FAI Junior Cup with Clonmel Town winning the coveted prize in 1994 and St Michael’s taking the honours in 1974 and 2014.

Now just three wins separate Peake Villa from competing in the final of the FAI Junior Cup which is, of course, scheduled to take place in the Aviva Stadium, Dublin next May.

In the Tipperary South & District League the Premier Division title race is really heating up.
Clonmel Town lead the division on 24 points with six games to play with St Michael’s a point off the pace, but with a game in hand.

Peake Villa, Clonmel Celtic and Tipperary Town feature in the chasing pack so you can expect plenty of drama in a break-neck race to the finish. Even this early next Sunday’s league clash between Clonmel Celtic and Clonmel Town represents a key fixture.

In division one with ten games played and six to play Bansha Celtic set the pace three points clear of St Michael’s while Redmondstown and Glengoole United are also in the hunt. Cullen-Lattin, who suffered a surprise defeat at the hands of Donohill and District, are dominating division two six points clear of second-placed Mullinahone with five to play while in division three Peake Villa are six points clear with four games to play from Tipperary Town in second place.

Blackcastle Templemore Harps lead the North Tipperary & District League Premier Division with a game to play. BT Harps are five points clear of Thurles Town, but Noel Byrne’s have five games in hand and six to play. Thurles Town must be odds-on to win the club’s first-ever league title - that is an extraordinary transformation considering the fact that Thurles Town found themselves bottom of the division 18 months ago.