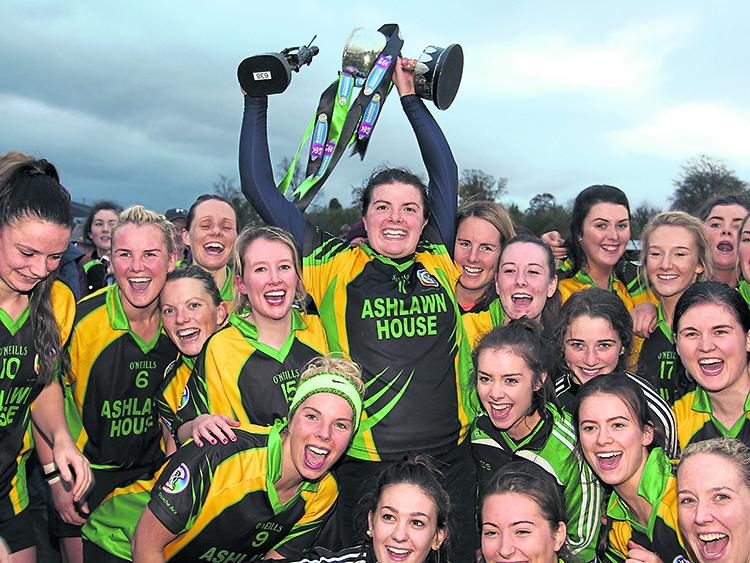 Will you be in Monaghan next weekend to support Burgess-Duharra?

Slaughtneil Robert Emmets are the talk of the country. Slaughtneil, a tiny rural club situated in the shadow of the Sperrin Mountains in south Derry, are the Ulster hurling, Gaelic football and Camogie champions - an extraordinary feat which most clubs could only dream of.

And, now Burgess-Duharra, the Tipperary senior Camogie champions, find themselves pitted against the remarkable Slaughtneil in an All-Ireland semi-final which is scheduled to take place on Sunday, January 29th in Inniskeen Grattans (Monaghan) at 2pm. Meanwhile Thomastown (Kilkenny) and Sarsfields (Galway) will meet in their respective semi-final at St Brendan’s Park, Birr.

The Derry champions reached the provincial Camogie decider in 2015, but lost out to Loughgiel (Antrim) before Slaughtneil met Loughiel Shamrocks, once more, in the 2016 Ulster final. The first game finished 1-8 apiece, but Slaughtneil won the replay 1-8 to 1-5.

The context associated with that provincial final, however, will give you a much clearer picture of what this Slaughtneil Robert Emmets club are capable of - during the week preceding the drawn game Thomas Cassidy died following an illness. Thomas Cassidy worked as a joint-manager of the team alongside Dominic McKinley and Damien McEldowney while his three daughters form the backbone of the side, namely Éilís, Aoife and Bronagh.

Although Tipperary would traditionally be regarded as a more potent Camogie force than Derry this Slaughtneil side are deserving of the utmost respect.

From a talent perspective players like the Cassidy sisters - Aoife at centre-back, Bronagh in midfield and Éilís up front - Clare and Josie McMullan, Megan Coyle, Theresa Mellon, Louise Dougan (team captain and top scorer), Shannon Graham, Mary Kelly and Cara Cassidy would grace any club team in the country.

But the real key to this Slaughtneil Robert Emmets team is their extraordinary sense of togetherness and appetite for battle. The Irish saying ‘ní neart go cur le chéile’ (there is no strength without unity) is proudly emblazoned across the gates to Emmet Park (Slaughtneil’s home ground) while the saying is also emblazoned across the front of the club’s Camogie jersey. It is no accident that, besides their Camogie success, Slaughtneil have also completed a Derry three-in-a row in football and a four-in-a-row in hurling.

And, according to manager Darrell Tucker, Burgess-Duharra are well aware that the Tipperary champions have a ferocious battle on their hands next weekend.

“Oh, most definitely - if you go back through the last couple of years in All-Ireland club semi-finals Milford only beat Eoghan Rua by a point and other teams like Kilimor only beat Loughiel by a point. So, we are taking nothing for granted. They are going to be serious opposition and we are treating it the same as how we would treat any other game,” Darrell Tucker told the Tipperary Star.

“This is a huge challenge,” Darrell Tucker (Burgess) said - Darrell is joined on the Burgess-Duharra management team by Timmy Maher (Burgess) and James McGrath (Toomevara).

“Since the Munster final we have been really looking forward to the huge challenge that’s ahead of us on the 29th. We gave the players two weeks off and then we settled down to some hard training in the gym before Christmas. We have had a few challenge games over the past couple of weeks and everything seems to coming right - the injuries are clearing up and all the colds and flues are clearing up so it’s all systems go,” Tucker added.

Burgess-Duharra are, of course, also due huge respect. In 2016 the club registered a fifth successive county senior title and sixth in seven years thanks to a replayed final win over Borris-Ileigh (2-13 to 1-9). Burgess-Duharra then beat Limerick champions Granagh-Ballingarry in emphatic style before battling their way toward a 2-10 to 0-6 Munster final win over Inniscarra (Cork). The victory over Inniscarra, in particular, represented an accomplished display, which featured a searing defensive effort, as the Tipperary champions claimed a first provincial title.

Although Caoimhe Maher and Tishy O’Halloran exerted a huge influence on that final it was probably fitting that Burgess-Duharra captain Jenny Grace was named the player of the match. The willingness of the Burgess-Duharra half-forward line to work back and make life as difficult as possible for the opposition was a huge factor in this contest.

Centre-forward Jenny Grace worked tirelessly as did Ciara McKeogh and Ruth Barry either side of her. Indeed, it was no accident that Inniscarra, the Cork champions, were held scoreless from play. Grace, McKeogh and Barry are the lungs of this side while Ciardha Maher, Caoimhe Maher and Tishy O’Halloran patrol the central corridor. This bunch set the terms and conditions of the battle during the Munster final - Burgess-Duharra played the game on their terms while up front Amy Kennedy, Tara Kennedy and Eimear McDonnell sunk the knife in when the opportunity presented itself.