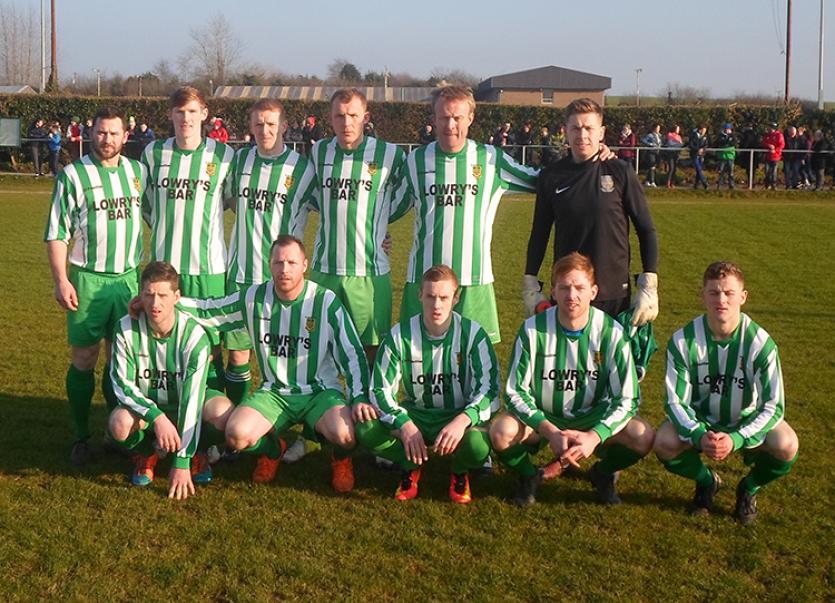 The St Michael's team which beat Peake Villa 5-1 on Sunday.

St Michael’s made a resounding statement of their intent for the remainder of the season when the Saints presented Peake Villa with a four-goal (5-1) beating in the last 32 of the Munster Junior Cup in Thurles.

St Michael’s now progress to the last 16 of the Munster Junior Cup - the Saints are, of course, the defending champions in this prestigious provincial competition. For a report on the game against Peake Villa please click here.

Happily Thurles Town are also through to the next round following their 4-1 win over Shannon Hibernians in Clare. Sadly Tipperary Town made their exit from the competition when they shipped a 2-4 defeat away to Dungarvan United.

Blackcastle Templemore Harps will host Nenagh AFC in the last 32 next weekend - BT Harps are the current leaders of the North Tipperary & District League Premier Division while Nenagh AFC are flying high in the Limerick District League. That clash should make for a tasty contest.

Meanwhile Peake Villa have been drawn to face Crumlin United in a FAI Junior Cup last sixteen tie which is scheduled to take place in Thurles on the week-ending Sunday, February 5th - for full details of the FAI Junior Cup draw please click here.

In division2A of the Ulster Bank League Cashel RFC beat Queen’s University 13-10 at Spafield on Saturday - at half-time Cashel led 10-5 and clung on for a vital win.

Meanwhile in Stradbrook Nenagh Ormond lost out to late try against Blackrock College (20-25). Nenagh trailed 3-17 at the break and although they fought back to tie the game a late Blackrock try sealed the win for the hosts. The bonus point earned by Nenagh Ormond helped to maintain the Tipperary side’s place at the summit of the division.

On Saturday, January 28th Cashel RFC travel to Cork to face Highfield while Nenagh Ormond will hope to get back to winning ways when they host Sunday’s Well.

In division one of the Munster Junior League on Sunday Clonmel maintained their magnificent 100% winning record when winning away to Cobh Pirates 37-7. Kilfeacle & District picked up a good win (16-14) away to Galbally while Clanwilliam lost (22-25) in Clare against St Senan’s.

Thurles RFC won a vital contest against Youghal on Sunday (13-12) on Sunday to maintain their title challenge in division two. A penalty from John Lillis sealed the points in this hard-fought affair.

On the GAA front the competitive season got underway in Mid Tipperary on Sunday when Thurles Sarsfields beat Holycross-Ballycahill 1-8 to 2-4 in the opening round of the under-21A football championship.