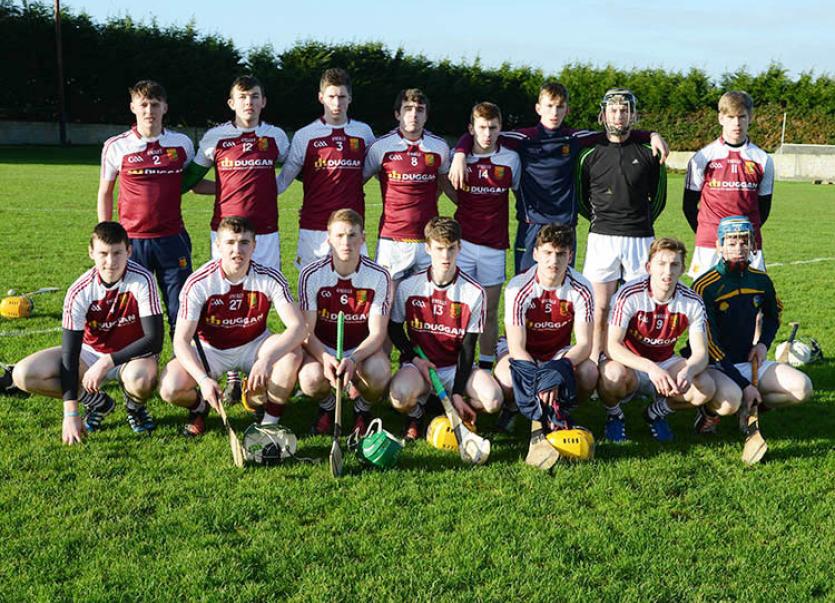 The Our Lady's Templemore team which beat Thurles CBS.

There is a tantalising early season treat in store for Tipperary hurling fans next Saturday, January 28th when Our Lady’s Templemore and Nenagh CBS clash in a Dr Harty Cup semi-final which is fixed for St Michael’s Park, Toomevara at 1.30pm.

Our Lady’s Templemore have been installed as favourites to progress to the final, but will not take anything for granted against Nenagh CBS.

Nenagh CBS beat Abbey CBS (1-22 to 2-16) in the opening round of the competition. In the last sixteen Nenagh enjoyed a seven-point victory over Castletroy College before avenging a 2016 quarter-final defeat suffered at the hands of De La Salle, Waterford with a 0-20 to 2-13 quarter-final win at Leahy Park, Cashel. It is worth noting that Nenagh CBS have already battled their way through two encounters which went to extra-time (Abbey CBS & De La Salle).

The Our Lady’s Templemore team is managed for the second successive year by Noel Fogarty and Tom Byrnes. And, Noel Fogarty is taking absolutely nothing for granted against Nenagh CBS.

“Thurles was a big test and we were glad to get over it. The scoreline flattered us in the end and, again, now we are looking forward to Nenagh. We know we are facing another huge task. Traditionally there is very little between Nenagh and Templemore in college games and even last year at under-17 level Nenagh gave us a bit of a trimming in the Fitzgerald Cup. So, we know that we have a big job facing us on Saturday,” Noel Fogarty told the Tipperary Star before explaining that his players are looking forward to the challenge posed by Nenagh CBS.

“There is no greater satisfaction for a player than coming out victorious after a tough struggle and after a battle - that’s what they are gearing themselves up for this week. It will be another battle and we know that there won’t be a lot in it either way.”

There is no getting away from the fact that this Our Lady’s Templemore team are a side of real quality. Our Lady’s lost the 2016 final to Árdscoil Rís and eight starters remain. These, of course, include notable members of Tipperary’s All-Ireland winning minor panel like Brian McGrath, Paddy Cadell, Lyndon Fairbrother, Jerry Kelly and Diarmuid Ryan.

Noel Fogarty, however, is an experienced coach and knows only too well how important it is to insulate his players from the sense of expectation which surrounds the Our Lady’s team and help them to focus on process involved in the attempt to win Saturday’s semi-final.

“There is a bit of a buzz around the school, but it’s only a semi-final, there is a long way to go and we are trying to take it step by step,” Noel Fogarty said.

“We can let people talk, but the players just want to get on with what they do and that’s to try and hurl to the best of their ability.

Our Lady’s Templemore won the coveted Munster colleges title once previously in 1978 (39 years ago) when beating St Flannan’s, Ennis 3-5 to 2-5. Since then Our Lady’s finished as runners-up against St Flannan's (2000), St Colman’s Fermoy (2002), Dungarvan Colleges (2013) and most recently against Árdscoil Rís, Limerick in 2016.

Templemore lost last year’s final by three points (0-8 to 0-11) at MacDonagh Park, Nenagh - Our Lady’s finished that contest disappointed; the players felt that they did not do themselves justice on that occasion. Indeed, in an indirect manner it nourishes the ambition of the many of the Templemore players this term.

“It has been a great year so far,” Noel Fogarty explained.

“A lot of them (the players) were there last year and we are trying to make up for what happened last year in the final against Árdscoil Rís.

This year’s Nenagh CBS team are jointly managed by Niall Quigley (Burgess), Dermot Brislane (Toomevara) and David O’Neill (South Liberties, Limerick). And, this week Dermot Brislane told the Tipperary Star that he hoped to have full a squad to pick from next weekend.

“We have a few lads who picked up a few knocks against De La Salle, but they are progressing nicely so, hopefully, when the match comes around we will have a clean bill of health and have a full squad to pick from,” Dermot Brislane explained.

Nenagh CBS were asked to overcome a significant obstacle in their respective quarter-final against Waterford’s De La Salle (0-20 to 2-13).

The meeting of De La Salle and Nenagh CBS was a repeat of the 2016 quarter-final pairing. On that occasion, Nenagh came in to the game as favourites after dethroning the then defending champions Thurles CBS, but it was De La Salle who were the more impressive, winning by 0-13 to 0-10 in a close encounter at Kilmallock.

In January 2017, and despite surging into a 0-9 to 0-1 lead inside the opening 16 minutes, Nenagh CBS struggled thereafter to deal with a De La Salle team who, once they had settled into their sweeper system, dominated for prolonged periods and led 2-11 to 0-16 in the third minute of injury time. Playing into the teeth of a gale Nenagh CBS looked doomed before second half substitute Kevin McCarthy flicked over an equaliser. Nenagh CBS seized the initiative in extra-time with three points from Jake Morris helping to fire the Tipperary side into the last four.

“The wind made the day difficult, but we ground out the result and the result is what was important on the day. A year ago we had fallen to De La Salle. So, it was nice to get over them at that stage of the competition.

“It was a huge effort on behalf of all of our squad. Hurling now at Harty Cup level takes 18 to 20 guys on the day to grind out a result and that’s what we have done over the last three matches. We have ground it out and people have contributed in different ways on different days. So, it’s a squad effort. There are 28 lads on the panel and they are all in contention for places. Please God come next week those 28 lads will be fit, healthy and fighting for their place to get on to the pitch against Templemore,” Dermot Brislane added.

Nenagh CBS can call on players of real quality like Jake Morris in their team, but Dermot Brislane is also aware that his side have it all to do against Our Lady’s.

“They are favourites for this competition since the start of the year and rightly so,” Dermot Brislane explained.

“They got beaten in last year’s final, they are a quality side and we are very aware of the challenge that we now face,” the Toomevara man said before explaining that his panel of players are looking forward to the challenge posed.

“I think every youngster in every school in Munster would look forward to being in a semi-final of the Harty Cup. I suppose the way that it has panned out we have a final in Tipp between two proud Tipperary schools and we have a final in Cork between two proud Cork schools and the prize is a place in a Harty Cup final. It is very exciting no matter what school that you are from.”

In their corresponding semi-final CBS Midleton (who beat defending champions Árdscoil Rís in the quarter-finals after a replay) face Coláiste Cholmáin, Fermoy - CBS Midleton are favoured to progress in that contest having won the 2014 and 2015 Dean Ryan Cup (under-16.5A Munster titles). The Dr Harty Cup final is pencilled in for Saturday, February 18th.