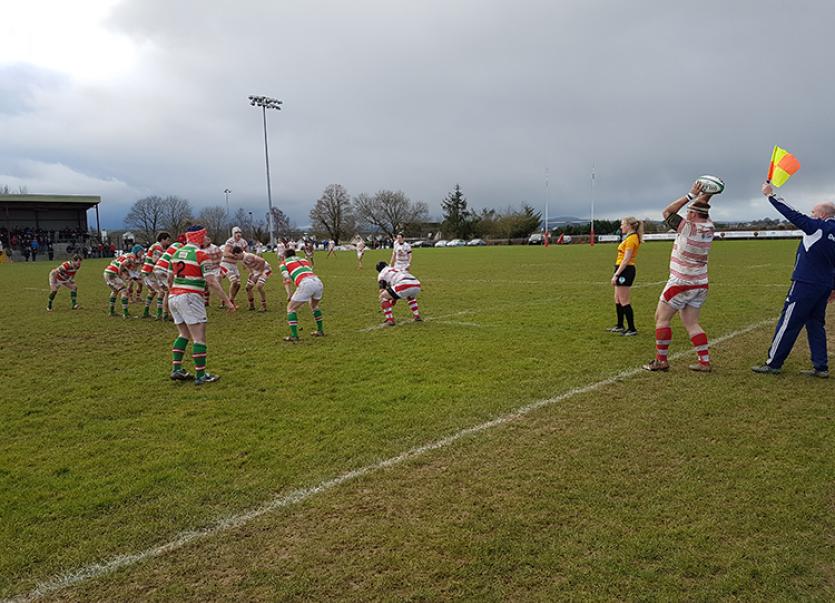 Nenagh Ormond pictured in action against Sunday's Well on Saturday.

Nenagh Ormond clung on for a narrow victory over Sunday’s Well at New Ormond Park on Saturday afternoon. This contest represented a searing test of Nenagh’s league credentials - Sunday’s Well threw everything at them and appeared to have the league leaders in trouble, but Ormond, in a display of raw grit, stuck at it and walked away with four precious points despite playing 20 minutes of the second half with 14 men. Indeed, this vital win ensures that Nenagh Ormond remain joint-top of the division alongside Highfield and Malone.

Sunday’s Well made a terrific start to this contest and pinned Nenagh Ormond back. The Cork side steered penalties wide in the 10th, 20th and 31st minutes while Ormond were also asked to defend their line on two notable occasions during the opening 16 minutes.

In the 13th minute Sunday’s Well mauled their way to the Nenagh line, but Ormond defended brilliantly and forced a knock on. Two minutes later the Cork side looked certain to score once more, but in a real show of grit Nenagh Ormond were disciplined in the tackle deep inside their own 22 and, ultimately, forced a penalty for holding on.

Considering the standard Nenagh have set this season supporters of the home side must have been disappointed with the Ormond performance in the opening half hour, but you would have to give Sunday’s Well great credit. The Cork side’s defence, especially at centre, was making life incredibly difficult for Nenagh.

Finally, Nenagh Ormond made their first foray into the opposition 22 in the 33rd minute. A careless knock-on in midfield presented Nenagh with a rare opportunity to attack. And, Ormond took full advantage from the resultant scrum - Lemeki Viapulu led the break off the base and although Peter O’Leary was hauled down on the line Nenagh recycled smartly before Conor Muldoon plunged over in the corner.

Six minutes into the second half Nenagh Ormond threatened a second try, but the Sunday’s Well defence scrambled back in the nick of time to deny Derek Corcoran. There would be no stopping Nenagh three minutes later, however, when an Ormond maul preceded two phases of one-out carries before John Coffey barged his way over (10-0).

To their credit Sunday’s Well came storming back and earned two successive penalties in kickable positions - on both occasions the Cork lads opted to go for the corner and were rewarded in the 56th minute when they mauled over for a converted try (10-7).

In the 59th minute Nenagh’s Willie Coffey was sin-binned and the picture looked a little bleak for 14-man Ormond. It was here, however, that Nenagh’s guts came to the fore. Nenagh Ormond dug in and devoted all of their energy to defence with Kevin O’Flaherty, Willie O’Connor, Keith Quigley and Lemeki Viapulu outstanding.

Nenagh Ormond shipped a second yellow card in the 69th minute when Derek Corcoran was sin-binned, but the home side stayed the course. Sunday’s Well looked certain to score in the 73rd minute - John Healy, however, had other ideas and his sensational tackle thwarted the opposition full-back deep inside the home side’s 22.

Unfortunately, Cashel RFC lost out to Highfield 7-31 in Cork having led 7-3 at the break. The Ulster Bank League will now take a break until Saturday, February 11th when Cashel RFC host Banbridge and Nenagh travel to Galway Corinthians.