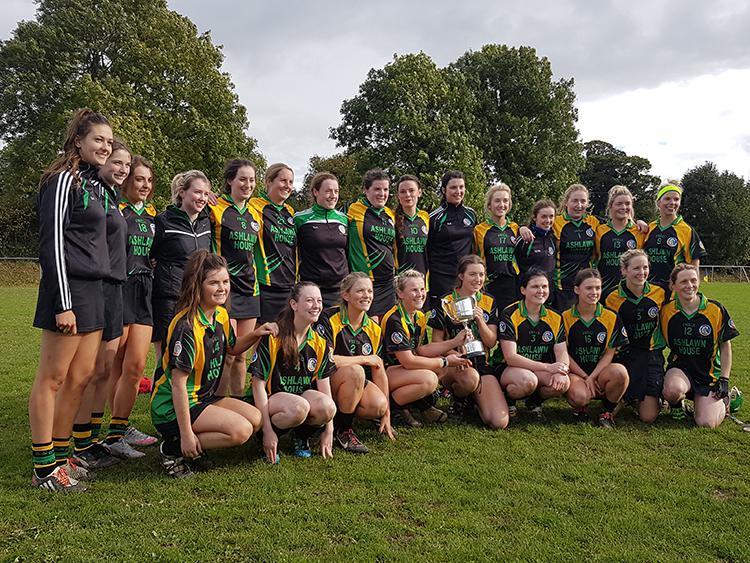 Slaughtneil Robert Emmets brought Burgess-Duharra’s All-Ireland campaign to a crushing end in a thrilling semi-final hosted at Páirc Grattan, the home of the Inniskeen Grattans GAA club, in County Monaghan on Sunday. Although it is of little consolation to the Tipperary champions Burgess-Duharra contributed handsomely to an absolutely enthralling contest which Slaughtneil deservedly won. The Derry champions now progress to the All-Ireland senior club Camogie final in Croke Park, Dublin on Sunday, March 5th.

Slaughtneil roared into a six-point lead inside the opening 38 minutes and although Burgess-Duharra reeled the Ulster champions in twice and reduced the deficit to one on two occasions during the second half Robert Emmets clung on for the win. Indeed, Dominic McKinley’s side were sensational. With Louise Dougan operated as deep-lying midfielder Slaughtneil defended brilliantly - Burgess-Duharra tried to work the ball up the flanks during the opening half especially, but Robert Emmets corner-backs Josie McMullan and Dervlagh McGuigan were simply outstanding. Indeed, 14 minutes had elapsed before Burgess-Duharra managed to muster a shot at Jolene Bradley’s goal.

The defining characteristic of this Slaughtneil Robert Emmets team is their extraordinary sense of togetherness and appetite for battle. The Irish saying ‘ní neart go cur le chéile’ (there is no strength without unity) is proudly emblazoned across the front of the club’s Camogie jersey and on Sunday it was obvious that Robert Emmets had invested significantly in their identity as a team which is prepared to battle to the very last. Indeed, Slaughtneil accumulated four hooks and three blocks during the opening eight minutes alone. Robert Emmets could hurl too and their well-constructed approach play caused the Burgess-Duharra defence all kinds of problems.

To their credit Burgess-Duharra never gave up and appeared to have found significant momentum in the second half when a 1-2 blast during a devastating two-minute period asked a huge question of Slaughtneil. The Derry champions, however, dug in impressively and battled their way toward a famous win. Tishy O’Halloran, Jenny Grace and Eimear McDonnell shone out for Burgess-Duharra against a Slaughtneil side which fired 3-7 from play.

Slaughtneil took the lead in the seventh minute when Louise Dougan converted a long-range free. Five minutes later Éilís Ní Chaiside’s shot appeared to be dropping harmlessly short when Mary Kelly conjured a sensational overhead strike which beat Ciara Holohan in the Burgess-Duharra goal (1-1 to no-score). Robert Emmets were playing a terrific brand of composed hurling and almost created a second goal in the 16th minute, but Elaine King recovered just in time to dispossess Sinéad Mellon with a brilliant tackle.

Despite operating with just five forwards Slaughtneil raced five points clear in the 19th minute when Aoife Ní Chaiside picked out Shannon Graham and the lively midfielder drilled over a left-handed point - the first of three from play for Graham.

Burgess-Duharra desperately required some encouragement and found a real tonic in the 22nd minute when Slaughtneil failed to deal with a Jenny Grace free which dropped short and Eimear McDonnell batted home a rousing goal. Four minutes later Tishy O’Halloran’s smartly-taken free found Eimear McDonnell working from inside to out; McDonnell beat her marker with a jink and landed a point off her right (1-1 to 1-2).

The Slaughtneil supporters, who really made their presence felt during this semi-final, demanded a response from their players and it came in the 27th and 30th minutes when points from Therese Mellon and Shannon Graham helped Robert Emmets into a 1-4 to 1-1 interval lead.

A Jenny Grace free four minutes into the second half left two between them, but Slaughtneil extended their advantage to a significant five in the 37th - Sinéad Mellon turned over a Burgess-Duharra defender and picked out the unmarked Denise McGuigan with a terrific cross; McGuigan stepped around a would-be tackler and finished off her right hand. A minute later player of the match Shannon Graham set up Sinéad Mellon for another point and, suddenly, Slaughtneil led by six (2-5 to 1-2).

Burgess-Duharra needed to respond and almost did in the 40th minute when a Jenny Grace pass sent Eimear McDonnell through on goal, but ‘keeper Jolene Bradley saved neatly. Grace converted the resultant ‘50 before Tishy O’Halloran sparked a move in the 42nd minute which dragged the Munster champions back into contention. O’Halloran’s delivery from defence found Eimear McDonnell who, in turn, played in Jenny Grace who hand-passed to the net after a surging run. Ciara McKeogh intercepted the resultant puck-out and won a free which Jenny Grace Converted (2-4 to 2-5). Game on.

With 15 minutes to play Slaughtneil responded to the Burgess-Duharra challenge when Therese Mellon took off down the left before rifling a blinding shot into the top right-hand corner - an extraordinary strike. Seconds later Mellon added a point from play and Burgess-Duharra trailed by five (2-4 to 3-6).

Eimear McDonnell tried to drag her side back into contention with a right-handed point in the 47th minute, but Slaughtneil hit back seconds later. Sinéad Mellon created a goal-scoring opportunity for Éilís Ní Chaiside - Ciara Holohan saved and Elaine King blocked Therese Mellon on the rebound before Shannon Graham fired her side into a 3-7 to 2-5 advantage.

Entering the last ten minutes a Jenny Grace free reduced the deficit faced by Burgess-Duharra to four before Tara Kennedy and Jenny Grace combined beautifully - Grace played in Eimear McDonnell and McDonnell made no mistake from close range (3-6 to 3-7).

The Tipperary champions had now been asked to dig deep twice during the second half - Burgess-Duharra had managed to reduce a six-point and then a five-point deficit to the minimum in quick succession. But just when it looked as if Burgess-Duharra had worked themselves into contention Slaughtneil seized the initiative, once more, in the 56th minute. Indeed, the composure of Robert Emmets in possession of the ball caught the eye as Shannon Graham, Éilís Ní Chaiside and Mary Kelly combined smartly before Siobhán McKaigue was played into space down the right flank. McKaigue drilled over her side’s eighth point and Slaughtneil clung on in a frantic finish which included two minutes of injury time.