Our Lady's Templemore through to the Dr Harty Cup final 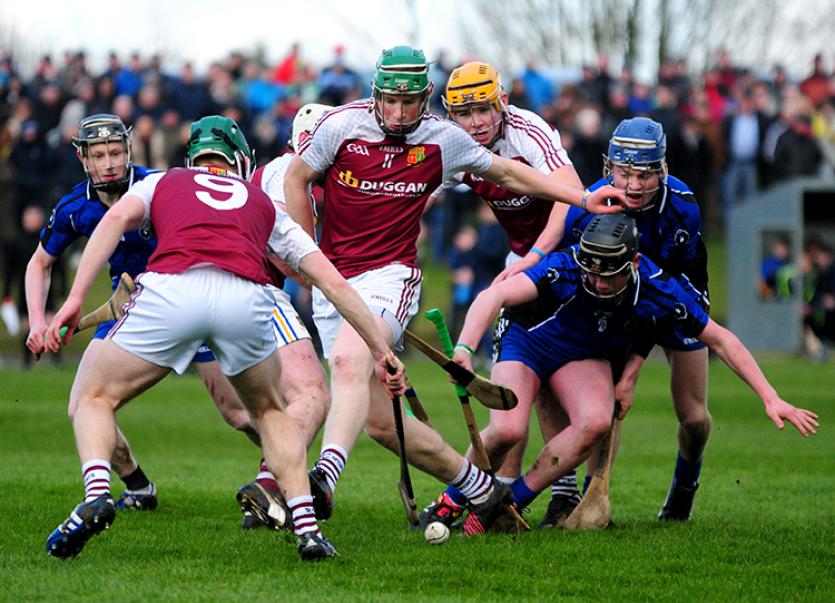 Our Lady's pictured in action against Nenagh CBS on Saturday.

The highlight of the weekend was Our Lady’s Templemore 1-15 to 0-14 win over Nenagh CBS at St Michael’s Park, Toomevara in a hard-fought Dr Harty Cup semi-final - Our Lady’s are now through to a second successive final. In their respective semi-final St Colman’s Fermoy surprised competition favourites CBS Midleton (1-8 to 0-7) - the Dr Harty Cup final is scheduled to take place on Saturday, February 18th.

Following Saturday’s contest Our Lady's joint-manager Tom Byrnes said his team will have to improve on their semi-final performance if they are to capture the Dr Harty Cup.

“We worked hard in what was a very tough game - as we expected - but the lads know that they will have to improve for the final,” Tom Byrnes explained after the game.

Meanwhile on Sunday Tipperary won the Fr Reid Cup (named in honour of Nenagh man Fr Alec Reid) in Belfast when beating Antrim 4-22 to 2-15 in a senior hurling challenge match. Antrim started well and led 2-7 to 0-6 during the opening half at Corrigan Park. Séamus Callanan (two), John McGrath and Pádraig Greene scored the goals for Tipperary. The match was played as part of ‘A Festival of Hurling’ hosted in honour of Fr Alec Reid.

In the Mid Tipperary under-21 football championship Loughmore-Castleiney beat Upperchurch-Drombane 2-8 to 2-6 and Gortnahoe-Glengoole beat Moyne Gaels 4-8 to 0-7 at the B grade while in the A competition Drom & Inch saw off Moycarkey-Borris (1-9 to 0-5).

Nenagh Ormond clung on for a narrow 10-7 Ulster Bank League division 2A victory over Sunday’s Well at New Ormond Park on Saturday afternoon. This contest represented a searing test of Nenagh’s league credentials - Sunday’s Well threw everything at them and appeared to have the league leaders in trouble, but Ormond, in a display of raw grit, stuck at it and walked away with four precious points despite playing 20 minutes of the second half with 14 men. Indeed, this vital win ensures that Nenagh Ormond remain joint-top of the division alongside Highfield and Malone. For a full report pleased click here.

Unfortunately, Cashel RFC lost out to Highfield 7-31 in Cork having led 7-3 at the break. The Ulster Bank League will now take a break until Saturday, February 11th when Cashel RFC host Banbridge and Nenagh travel to Galway Corinthians.

Goals from Alex Gardas and Alan Sheehan helped Nenagh AFC to record a 2-0 Munster Junior Cup win over Blackcastle Templemore Harps on Sunday afternoon. Nenagh AFC are now through to the last 16 of the competition alongside St Michael’s - the Saints are, of course, the defending champions in this prestigious provincial competition. Happily Thurles Town are also through to the next round following their 4-1 win over Shannon Hibernians in Clare recently. In the last 16 Nenagh AFC have been drawn against Killarney Celtic, Thurles Town against Pike Rovers and St Michael’s are away to Hibernians.

The games are scheduled to take place on the week-ending February 12th.

Slaughtneil Robert Emmets brought Burgess-Duharra’s All-Ireland campaign to a crushing end in a thrilling semi-final hosted at Páirc Grattan, the home of the Inniskeen Grattans GAA club, in County Monaghan on Sunday. Although it is of little consolation to the Tipperary champions Burgess-Duharra contributed handsomely to an absolutely enthralling contest which Slaughtneil deservedly won. The Derry champions now progress to the All-Ireland senior club Camogie final in Croke Park, Dublin on Sunday, March 5th. For a full report on this game please click here.

Shane Ronayne's Tipperary intermediate ladies football team made a great start to their Lidl National Football League division three campaign on Sunday when winning 4-10 to 2-10 in Wexford. The Premier trailed 1-4 to 2-9 at the break, but out-scored their hosts 3-6 to 0-1 in the second half in Enniscorty. Tipperary are away to Roscommon next Sunday.