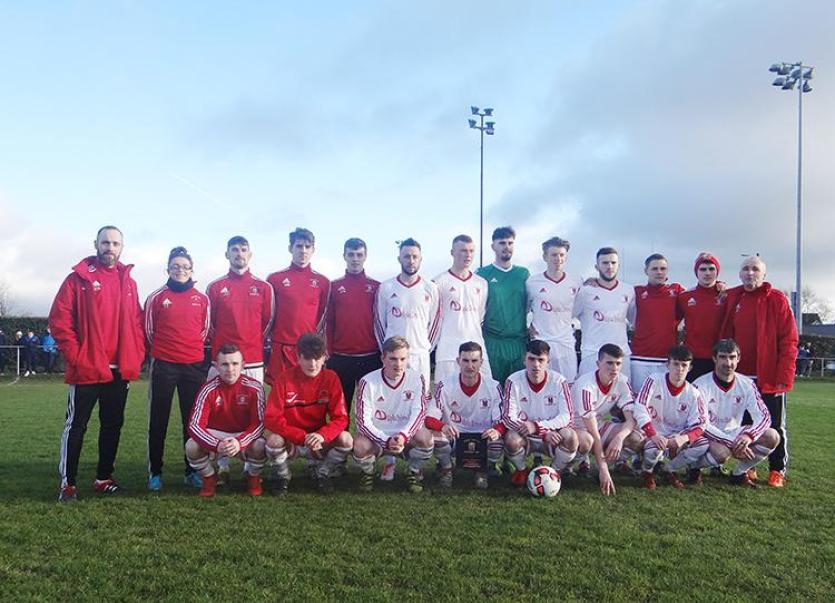 The Peake Villa squad of players which beat Cherry Orchard 2-1.

There is a huge prize on offer next Sunday when Leinster Senior League side Crumlin United pay a visit to Peake Villa in the seventh round of the FAI Junior Cup - a coveted place in the quarter-finals of the prestigious competition is up for grabs. And, this week Peake Villa manager James O’Sullivan has called on the people of Thurles and, indeed, Tipperary to support his side at the Tower Grounds on Sunday, February 5th (kick-off 2pm).

In the sixth round of the prestigious competition Peake Villa saw off Cherry Orchard (2-1) thanks to two Pippy Carroll goals - Peake Villa were superb in that contest with their sophisticated team structure and slick approach play causing the renowned Dublin club problems right from the off. Although Villa were good value for that win in the last 32 of the FAI Junior Cup ‘keeper Stephen Ryan was asked to make a couple of telling saves. Martin Fogarty, Alan Leahy and Seán Wade were outstanding at the back while the combination of Gary Lyons, Keith Cahill and Maris Baltins dominated midfield. On the flanks Michael Wade and Dale Loughnane ran themselves to a standstill, as did the tireless Mathew McKevitt up front while the form of Pippy Carroll caught the eye in a man of the match display.

Peake Villa’s campaign has already featured an impressive 8-0 win over Cullen Lattin (with Matthew McKevitt and Pippy Carroll both registering hat-tricks) before the Thurles side beat Cork’s Knocknaheeny Celtic 4-1 away from home to qualify for the last 32. The Peake Villa campaign also featured a notable victory over North Tipperary & District League champions Nenagh Celtic in the third round. Goals from Pippy Carroll and Adam Garrett sealed that result. Now just three wins separate Peake Villa from competing in the final of the FAI Junior Cup which is, of course, scheduled to take place in the Aviva Stadium, Dublin on Saturday, May 13th (7pm).

Peake Villa are the only Tipperary league side to progress to the seventh round of this year’s competition. But Tipperary teams do have form in the competition - Clonmel Town won the coveted FAI Junior Cup prize in 1994 and St Michael’s took the honours in 1974 and 2014.

In the sixth round Thurles Town lost 1-4 away to Crumlin United and although the Leinster Senior League side will be made favourites to progress past Peake Villa there is no doubt that James O’Sullivan’s side are invigorated by the challenge posed.

“We are looking forward to it,” James O’Sullivan told the Tipperary Star.

“It is great to get one of the biggest clubs in Ireland down, especially a team which produced players like Robbie Keane. It is a big, big test for our lads, but they are all well up for it. We didn’t get to this level by luck or by fluke. We have talented players.

“Everyone wants to play in front of a crowd - I think the game against Cherry Orchard was the biggest crowd that some of our lads would have ever played in front of and not one of them went hiding. They all played to their potential that day and there is more in them.

“There is nothing better than playing in front of your own friends and family with everyone cheering for you. Hopefully, that will make it hard for Crumlin to come down and face a 12th man in terms of home support,” James O’Sullivan added before he praised the club committee for their tremendous work behind the scenes.

Team physiotherapist Leanne Fogarty will, of course, also be working over time this week in order to ensure that James O’Sullivan has a full deck to pick from come Sunday.

And, the thoughts of the entire Peake Villa club are with outstanding 18-year-old player Evan McCormack who will undergo an operation for ruptured cruciate knee ligament this week.

Peake Villa, of course, need to find their form for the visit of Crumlin United.

Despite enjoying a 2-1 win over Cherry Orchard the Thurles side followed that encouraging performance up with a disappointing display in the Munster Junior Cup - Peake Villa shipped a 1-5 defeat at the hands of St Michael’s in the last 32 of the provincial competition.

“We were a little bit tired - we played three or four big games for a few weeks in-a-row which is new to a lot of the lads,” manager James O’Sullivan explained.

“It was a little bit of a reality check for the players; they have not won anything yet. St Michael’s, obviously, have won Munsters and FAI Junior Cups during the last few years. That result will bring us back to down to earth and help to focus us on the job ahead. We have to get the lads going again in training and give the morale a boost. It’s all about getting the buzz going again, learning from our mistakes and getting going again.”

In 2017 Peake Villa celebrate the club’s 50th anniversary (formed 1967). Hopefully James O’Sullivan’s lads can conjure a performance worthy of such a milestone on Sunday.