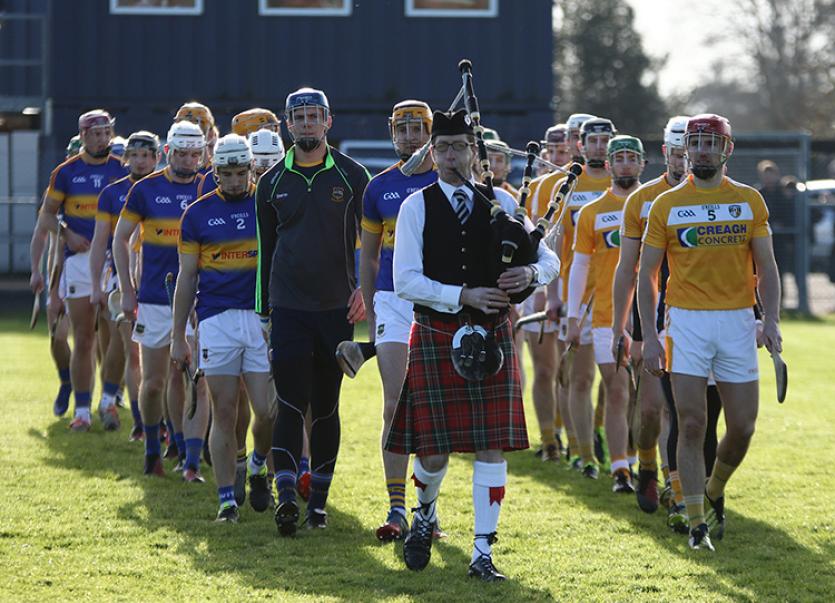 The Tipperary and Antrim players pictured during the pre-match parade on Sunday in Belfast.

County Board secretary Tim Floyd has this week praised the Tipperary players for their exemplary behaviour - on Saturday Michael Ryan’s hurling squad travelled to Belfast to take part in two-day ‘Festival of Hurling’ hosted in honour of Nenagh man Fr Alec Reid.

On Saturday the Tipperary senior hurlers trained at the Woodlands Pitches before hosting a meet and greet session for fans while on Sunday the players attended a special mass at Clonard Monastery which featured the presentation of three especially-commissioned plaques dedicated to Fr Reid which were unveiled by Uachtarán Cumann Lúthchleas Gael Aogán Ó Fearghail. One plaque was presented to the Clonard Redemptorist order, the second will be installed in the redeveloped Casement Park and the third was presented to the Tipperary County Board. Also on Sunday Naomh Eoin CLG’s Corrigan Park hosted an inter-county hurling challenge match between Tipperary and Antrim.

“I was so proud of the dignity and courtesy shown by our players at all the events in Belfast over the weekend,” County Board secretary Tim Floyd told the Tipperary Star.

“They sat through speeches, attended the special mass for Fr Alec Reid in Clonard Monastery and, of course, made themselves available to everyone, young and old, over the two days. Tipperary GAA is just so lucky to have such tremendous ambassadors representing us at this time,” Tim Floyd added.

And, this, it appears, is not an isolated incident. At last week’s County Board meeting secretary Tim Floyd read aloud from a letter received from New York which also praised the Tipperary players for their behaviour.

During the recent visit to the United States members of the Tipperary minor and senior teams were invited to attend the Le Chéile Hurling Club Christmas party at Gaelic Park, the Bronx. Le Chéile is one of five hurling clubs competing under the New York Minor Board. Underage hurling is growing in New York with the first-ever underage team set to compete in the Féile na nGael tournament preparing to travel to Ireland this year (the team will be managed by Silvermines native Joe Grace).

A letter from the organisers of the Le Chéile Hurling Club Christmas party described the behaviour of the Tipperary players at the event as “fantastic”.

“The County Board and clubs of Tipperary should be extremely proud of these young men,” concludes the letter.

On Sunday Tipperary won the Fr Reid Cup (named in honour of Nenagh man Fr Alec Reid) in Belfast when beating Antrim 4-19 to 2-15 in a senior hurling challenge match. Antrim started well and led 2-7 to 0-6 during the opening half at Corrigan Park. Séamus Callanan (two), John McGrath and Pádraig Greene scored the goals for Tipperary.

The match was played as part of ‘A Festival of Hurling’ hosted in honour of Fr Alec Reid - the Redemptorist Priest played a crucial role in the Peace Process. Fr Reid was a member of the Tipperary minor hurling panel which won the All-Ireland title in 1949 and he was a joint-recipient of the 1995 Tipperary International Peace Award. Alec Reid was also named the Tipperary Person of the Year by the Tipperary Association, Dublin in April 2006.