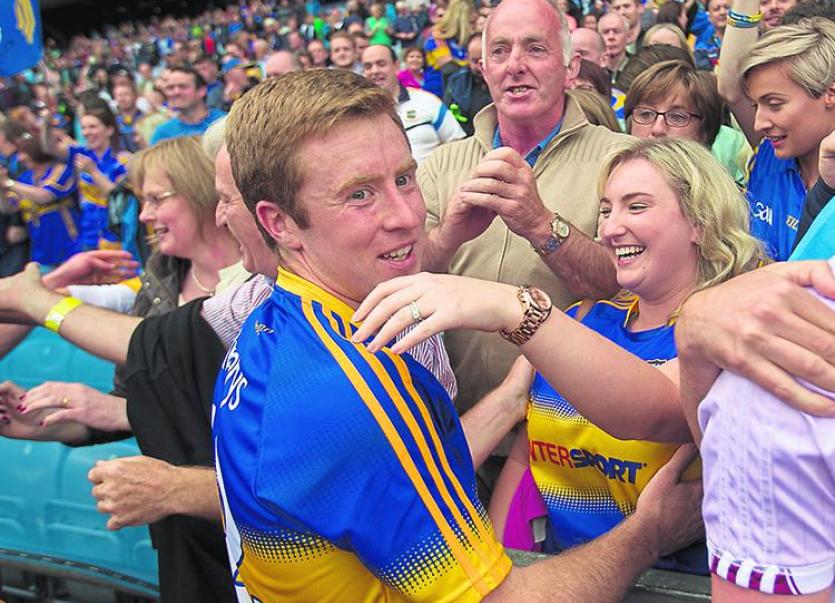 Éire Óg Annacarty's Brian Fox has been named as the Tipperary football captain for the 2017 season - the 28-year-old succeeds Peter Acheson and will lead the team out against Antrim in Sunday's Allianz National Football League clash at Semple Stadium, Thurles (throw-in 2pm).

The lion-hearted Fox made his debut for Tipperary in 2009 and played brilliantly during the Premier County's charge to last year's All-Ireland semi-final. Indeed, Brian Fox's performance during the 3-15 to 2-16 win over Cork in the 2016 Munster semi-final will live long in the memory of Tipperary fans. The Tipperary Star is sure and certain that the news of Fox's appointment will be greeted warmly by supporters of the blue and gold.

Robbie Kiely has also been installed as vice-captain.

Tipperary senior football manager Liam Kearns has also named his team to face Antrim on Sunday. And, Kearns has picked a strong side with Paddy Codd and Liam McGrath, in particular, making a welcome return to the side.

Ahead of the opening game in division three of the Allianz National Football League against Antrim Tipperary senior football manager Liam Kearns was in reasonably bullish mood this week. Indeed, Kearns indicated that Tipperary must win their home games in the division in order to force their way into the promotion picture.

“We will be looking to win the match,” Liam Kearns told the Tipperary Star.

Tipperary will host Antrim at Semple Stadium, Thurles on Sunday, February 5th at 2pm - the Premier County’s schedule features four home games and places Kearns’ men in a position to challenge for promotion.

“If we want to get promoted we have to win our home matches,” Liam Kearns said.

“We have four home matches and we really need to win them all. We are in Thurles and we have got to have enough about us to go and win the match (against Antrim). That’s the bottom line. We will be going out to win the match and we will be very disappointed if we don’t,” the Kerry man added.

And, the gravity of the situation, according to Liam Kearns, is not lost on the players: “the players realise that it is important that we win our home matches. They feel that we need to get out of division three as well so they are definitely up for it. We’re not anywhere near 100% fitness-wise, but hopefully we will have enough about us to get the job done. It’s a home game and the onus is on us to win.”

Antrim won promotion from division four in 2016. The sides last faced one another in 2014 when Antrim made the trip to Thurles and lost on a 2-17 to 3-20 scoreline. There was just three points between them (2-12 to 1-12) in the 47th minute of that encounter, but Tipperary finished strongly with Barry Grogan (2-7) and Conor Sweeney (1-7) catching the eye. A shocking attendance of just 217 turned up Semple Stadium for that contest - surely supporters of the blue and gold can do better this time?

Watch out here for an enthusiastic Antrim team who are eager to make their mark on division three.

Tipperary will follow up the game against Antrim with another home game - this time a clash with Sligo in Thurles on Sunday, February 12th before facing Laois (away) on Saturday, February 25th.

“You would have to take the first two rounds of the league together - they are seven days apart, they are both at home and we need to win them both,” Liam Kearns explained.

“Winning one without winning the other won’t be good enough - we have to win both games; that’s my view. We have a tough game away against Laois in the third round. So, these first two matches are important. We are not quite at our best, but, at the same time, hopefully we will have enough about us to get the job done.”

Tipperary are restricted by a number of significant injuries. Tipp, for instance, will field without five of the team that started last August’s All-Ireland semi-final against Mayo. Colm O’Shaughnessy, Ciaran McDonald and George Hannigan are injured, Bill Maher is suspended (red card v Mayo) and 2016 captain Peter Acheson is in Dubai. Meanwhile Conor Kenny and Shane O’Connell are rehabbing long-term injuries while Diarmuid Foley is out with a virus.

Last week Liam Kearns confirmed that Tipperary will not seek to replace Jerome Stack who stepped down as coach citing personal reasons for his decision to do so - the Kerry native joined Kearns' management team during the off-season.

“Unfortunately Jerome (Stack) has left us for personal reasons, but, no, we won't be bringing in any replacement,” Liam Kearns told the Tipperary Star last week.

Golden-Kilfeacle's Shane Stapleton features on the management team as coach-selector alongside Paul Fitzgerald (Fethard). Dave Moriarty heads up the strength and conditioning team alongside Paul Howard while Ian Dowling is the lead physiotherapist with Paul McMahon playing a supporting role. Brian Lacey and Michael Byrnes will perform a key duty for the team this season in terms of performance analysis.