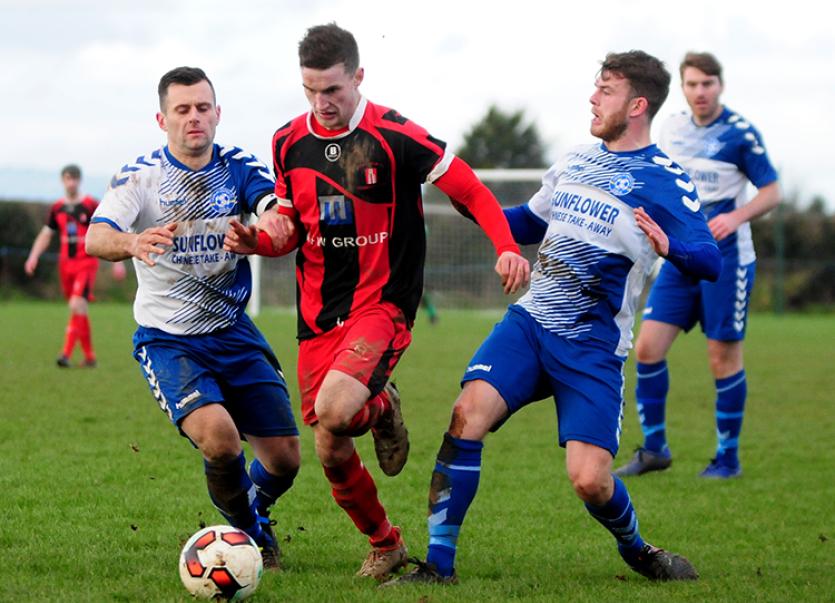 Mathew McKevitt struck twice for a resilient Peake Villa team on Sunday as James O’Sullivan’s enterprising side recovered a single-goal deficit twice before forcing themselves into the last eight of the FAI Junior Cup thanks to a dramatic winner in extra-time at the Tower Grounds.

Despite dominating this contest the Thurles side fell behind twice, but stuck to their task admirably and forced extra time thanks to Michael Wade’s equaliser with just three minutes to play. Mathew McKevitt notched one goal six minutes into the second half while the lively centre-forward guided home Gary Lyons’ left-footed delivery in the opening minute of extra-time.

“We were down one-nil at half time, but we knew ourselves in the dressing room that we had not got going yet. We came together and got the early goal which brought us back into it. I thought we were going to go on again from there and next thing it was 2-1 to them, but the boys never stopped. The fitness was there, they kept going and I think the heart, the character and the team spirit got us there. That got us over the line, I think. And, the fans were an extra man on the field for us. We are just delighted to come out and get the result. We are into the quarter-finals - it has been a long time coming for the club. It’s absolutely fantastic - a great day for the club,” James O’Sullivan said.

“To be fair to Crumlin they battled and they gave us a tough, tough game. They were well able to knock it around. We had our home-work done though,” the Peake Villa manager explained before adding that a home draw would be his preference in the last eight.

“A home draw, a home draw is all I will say. From here on in you’re playing the top teams anyway. It’s a quarter-final now and we will be happy with whoever comes out,” James O’Sullivan said.

Crumlin mustered an attack of note in the 30th minute, but found Stephen Ryan’s side netting on that occasion before the Leinster Senior League side took the lead in the 36th minute when Peake Villa only managed to half clear a corner - the ball was swung in once more and the Dubliners headed themselves into a one-nil interval advantage.

Six minutes into the second half Peake Villa equalised - Seán Wade picked out Pippy Carroll at midfield and the outstanding Carroll played in Mathew McKevitt who nudged the ball past the advancing Crumlin United ‘keeper.

With the home crowd getting more and more involved in this contest Crumlin appeared to be wobbling, that is until a break away goa in the 59th minute presented the visitors with a precious 2-1 lead against the run of play.

To their credit Peake Villa responded very positively to the circumstances they found themselves in. Indeed, a minute later Mathew McKevitt and Keith Cahill combined before Crumlin scrambled a Michael Wade effort off their line. Seconds later Alan Leahy just failed to make a telling connection on a Michael Wade cross before a Crumlin United defender was sent off in the 65th minute for a wild lunge on Maris Baltins.

Peake Villa pushed two up front and were almost rewarded with a deserved equalising goal in the 80th minute, but Dale Loughnane fired his shot narrowly wide. In the 82nd and 86th minutes Michael Wade corners found Alan Leahy and then Billy McCarthy, but both players guided their respective headers over.

Finally, with just three minutes to play, man of the match Gary Lyons swung over a left-footed delivery. Although Mathew McKevitt failed to connect Michael Wade was loitering unmarked on the right flank and drilled home a terrific equaliser.

Peake Villa took the lead in the opening minute of extra-time - Mathew McKevitt was fouled on the right flank, Gary Lyons swung in the resultant free kick off his left and McKevitt glanced home his header at the near post (3-2).

Crumlin United desperately tried to respond, but frustration got the better of them in the second half of extra time when the Leinster Senior League side were reduced to nine men following a second red card.