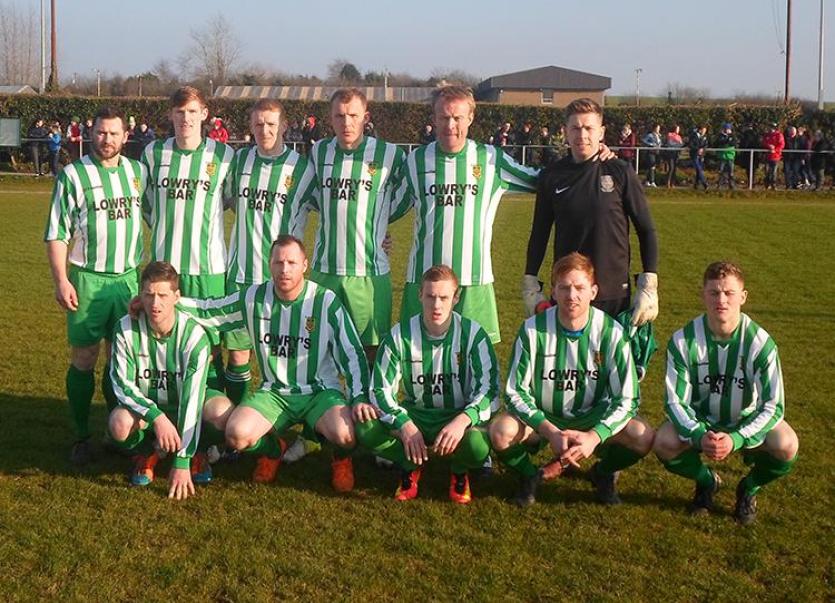 The St Michael's FC team which beat Peake Villa 5-1 in the fourth round of the Munster Junior Cup.

There are places in the last eight of the Munster Junior Cup up for grabs when Nenagh AFC, Thurles Town and defending champions St Michael’s compete in the fifth round of the provincial competition.

In the last sixteen Nenagh AFC, who are flying high in the Limerick District League, have been drawn at home against Killarney Celtic, Thurles Town host Limerick kingpins Pike Rovers and St Michael’s are away to Hibernians (Waterford).

Hibernians beat Cork AUL side Coachford 4-2 in the last round and saw off Stradbally 3-0 previous to that. Hibs are regarded as a top class side, but St Michael’s made a resounding statement of their own intent for the remainder of the season when the Saints presented Peake Villa with a four-goal (5-1) beating in the last 32 of the Munster Junior Cup in Thurles. Previous to that encounter the side managed by James Walsh beat none other than Clonmel Town 3-0 away. Hibs host St Michael's on Sunday, February 12th at 2pm.

Nenagh AFC will be hoping to attract a big crowd when the Limerick District League Premier Division leaders host Killarney Celtic at Brickfields, Nenagh on Sunday, February 12th at 2pm. Killarney Celtic beat Ringmahon Rangers 4-0 last time out and knocked out Listowel Celtic (2-1) previous to that. Killarney Celtic will make the trip to Tipperary eager to make an impression, but Nenagh AFC will be favoured to win. Nenagh are in flying form - goals from Alex Gardas and Alan Sheehan helped Nenagh AFC to record a 2-0 Munster Junior Cup win over Blackcastle Templemore Harps in the previous round and although Nenagh have never won the Munster Junior Cup they did progress to the final in 2012 (lost to Janesboro).

Thurles Town negotiated a tricky away tie against Shannon Hibernians in the last round to the tune of a 4-1 win in Clare, but have their work neatly carved out for them in the last sixteen when Noel Byrnes’ side host Pike Rovers who are regarded as one of the best junior clubs in the country. Rovers have struggled a little in the Limerick District League this season, but saw off Cork AUL side Park United 4-2 away from home in the last round and beat Ballynanty Rovers 2-0 in the previous round. The tie between Thurles Town and Pike Rovers is scheduled to take place the week-ending Sunday, February 19th.