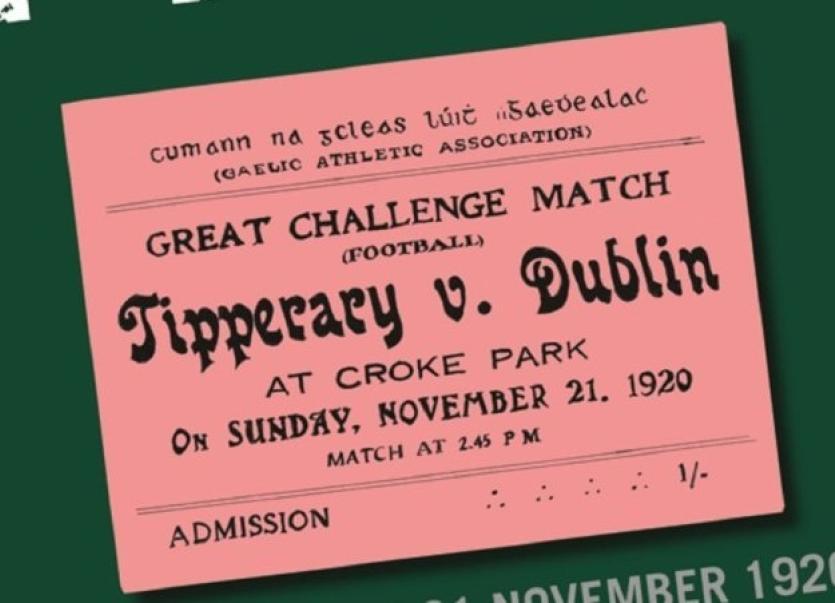 On the night Mr Foley will present an account of the dramatic events at Croke Park in 1920 - the Tipperary connection should, of course, be of great interest to the general public. Michael will walk you through the events leading up to the day, the incident itself and the aftermath. Mr Foley will Daniel Carroll in particular - Daniel was from Templederry and was an unfortunate victim of the atrocity.

Following a co-ordinated IRA attack, which saw 14 members of the British intelligence forces in Ireland shot on Sunday, November 21st 1920, the British military responded when members of the Auxiliary Division and Royal Irish Constabulary opened fire on the crowd at a Gaelic football challenge match between Tipperary and Dublin at Croke Park.

Fourteen civilians were killed and at least 60 wounded. Tipperary footballer Mick Hogan was shot and killed on the day while Templederry native Daniel Carroll was shot in the leg as he walked up Russell Street outside of Croke Park. The 30-year-old Carroll died the following Tuesday from his injuries and was buried in an unmarked grave at Glasnevin Cemetery on Thursday, November 25th. Daniel Carroll was originally from Ballincara House, Templederry and worked as a barman in Kennedy’s of Drumcondra.

In 2014 Michael Foley, the Sunday Times journalist and award-winning author, published a seminal book, ‘The Bloodied Field’, which detailed the horrific events surrounding Sunday, November 21st 1920. Indeed, the book details the savage events of Bloody Sunday and brings to life, in extraordinary detail, the horror of the day. Mr Foley paints an intimate portrait of those killed and recounts the experiences of the shattered families who were left behind.

‘The Bloodied Field’ comes highly recommended and is available from all good book shops while you can also buy a copy of Michael Foley’s extraordinary work by clicking here.