Determined Tipperary stay the course in key clash away to Laois 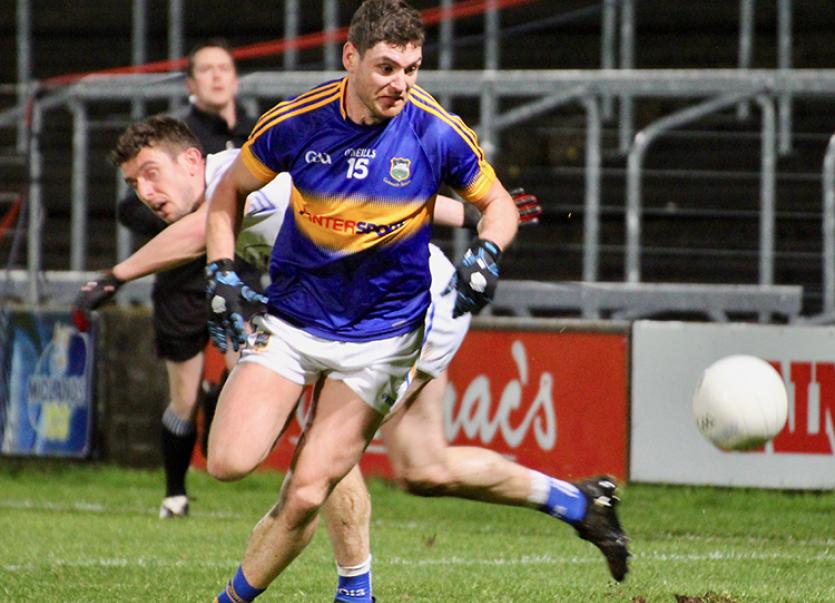 A determined Tipperary senior football team shook off the concession of late Laois goal at O’Moore Park, Portlaoise on Saturday night and earned themselves a six-point win which propels Liam Kearns’ men back into the promotion picture.

This was a performance which will warm the heart of Tipperary fans. Following an off-colour display during the defeat suffered at the hands of Sligo Tipperary needed a solid performance on Saturday. Liam Kearns demanded that performance from his players and he got it.

Tipperary started well, etched out a five-point lead and although Laois reeled them in during the second quarter to trail by just a point at the break Tipp seized the initiative post-interval and led by four (0-13 to 0-9) entering the final ten minutes. A David Conway goal, which came courtesy of a little dithering in the Tipp defence, could, potentially, have transformed the trajectory of this game, but Tipperary were having none of it and dominated the remainder of the contest.

In the end Tipperary won by six and although Kevin O’Halloran’s match-clinching goal was of the fortunate variety no one could have begrudged Tipp this victory - each time Tipperary were asked a serious question they answered it.

This was much more like it from Tipp. Outside of a wobble in the second quarter Tipperary were the more consistent force in this contest and played the better football with Brian Fox a very worthy man of the match award winner. Outside of the contribution of the Éire Óg Annacarty man Alan Campbell was relentless in defence, Robbie Kiely was regularly influential, Conor Sweeney was unerring up front, Kevin O’Halloran got through the world of work and the midfield pairing of Liam Casey and Jack Kennedy did especially well given their limited experience.

NEXT UP FOR TIPP

Although Tipperary had started slowly against both Antrim and Sligo Liam Kearns’ men appeared determined to avoid making a similar mistake at O’Moore Park on Saturday night and raced into a five-point lead (0-6 to 0-1) inside the opening seventeen minutes.

Laois took the lead thanks an expert Dónal Kingston free in the second minute, but Tipperary brought great energy to the early exchanges and may have plundered three-pointers when both Conor Sweeney and Michael Quinlivan enjoyed slight sniffs of goal. The three-pointer didn’t materialise on this occasion, but Tipp’s ability to find a way through the Laois defence was encouraging all the same.

A Conor Sweeney point from play tied the game before Jimmy Feehan booted over a terrific effort in the fourth minute (0-2 to 0-1).

Laois had already amassed four wides when Kevin O’Halloran was fouled and Conor Sweeney converted a placed ball in the ninth minute. Philip Austin was up-ended for a suspected penalty two minutes later, but referee Niall McKenna waved play on.

An illustration that Tipperary meant business materialised in the 12th minute when team captain Brian Fox burst through the Laois half-back line and won a free which Conor Sweeney converted. Then, just a minute later, Tipperary conjured another terrific move which culminated with a Conor Sweeney finish. Philip Austin was fouled for a free soon after and Josh Keane fired over to present Tipperary with a 0-6 to 0-1 lead by the 17th minute.

And, just when we were wondering why Tipperary had not started the contest against Sligo in a similar fashion Laois took over. Indeed, Tipperary would only enjoy two shots at the home side’s goal during the second quarter as Laois asserted themselves in this contest.

Centre-back Colm Begley launched the Laois comeback with a smashing point off the outside of his left boot in the 18th minute before Niall Donoher added another. Tipperary unfortunately lost Michael Quinlivan to injury in the 24th minute and before Liam Kearns could re-structure his side Laois won a free which Dónal Kingston stroked over.

Philip Austin cracked over a beauty in the 32nd minute (Tipp’s first score in fifteen minutes), but Laois were in control now and notched two Dónal Kingston points (one free) during the closing minutes of the half to leave one between them at the break (0-7 to 0-6).

In the opening minute of the second half a John O’Loughlin point tied the game and Tipp needed to find a response. And, find it they did when Philip Austin jinked past his marker and landed an effort off his left to re-claim the lead for Tipperary. Then, in the 40th minute, a foul on Kevin O’Halloran presented Conor Sweeney with a chance to force Tipp into a two-point lead and, thankfully, the Ballyporeen man made no mistake.

Kevin O’Halloran’s wonderful bit of ingenuity almost created a goal for Liam McGrath in the 42nd minute - the Portroe man picked out the run of Liam McGrath inside the Laois full-back line with a sensational forty-yard delivery. The Loughmore-Castleiney star was just a fingertip away from collecting the ball with the goal at his mercy.

A David Conway point reduced the deficit to one before Liam Casey was fouled following some sloppy tackling from the Laois defence and Conor Sweeney converted in the 43rd minute. Four minutes later Kevin O’Halloran set up Liam McGrath for a super point off his left and Tipperary, who were playing some lovely football now, enjoyed some breathing space (0-11 to 0-8).

Evan Comerford deflected an ambitious Dónal Kingston shot over in the 49th minute, but from the re-start Tipp scooted down the field and Brian Fox scored off his right following an excellent through ball from Philip Austin. The raiding Jimmy Feehan was then fouled in the 53rd, Conor Sweeney stroked his shot over from close range and Tipp led by four (0-13 to 0-9).

Tipperary were patient in attack all evening and that pattern was best illustrated by the fact that the side accumulated just two wides (Laois nine). The home side appeared to tire significantly in the last twenty minutes - they certainly tackled like a tired team. In all Laois conceded 23 frees (Tipperary 19) and Dónal Kingston shipped a black card in the 58th minute pretty needlessly.

Laois were not playing well enough to really threaten Evan Comerford’s goal, that is until Tipperary coughed up hard-won possession deep inside their own half and the home side plundered a goal - David Conway buried his left-footed shot to leave a point between them in the 61st minute.

Tipperary responded brilliantly, however, to the circumstances they found themselves in. A Liam Casey point off his right in the 62nd minute opened a two-point gap before Tipp created a goal-scoring opportunity for Josh Keane, but Graham Brody was smartly off his line to smother.

In the 66th minute Tipperary threatened another goal - this time the build-up play featured Kevin Fahey, Kevin O’Halloran, Conor Sweeney and an enterprising support run from corner-back Emmet Moloney. Indeed, Moloney found Philip Austin and although Austin’s palmed finish was saved Moloney collected the rebound and punched over. Soon after Robbie Kiely set up Kevin Fahey for another point and Tipp led 0-16 to 1-9 - following the concession of the goal Tipperary had scored three points and created two goal-scoring opportunities.

Given their endeavour Tipperary probably deserved a little good fortune and happened upon it in the 72nd minute when Kevin O’Halloran’s ambitious effort at a placed ball (potentially 52 metres from goal) dropped short and squirted over the line.

A David Conway free brought the scoring to a conclusion for a Laois side who saw Evan Comerford save smartly from Colm Begley in the 73rd minute.