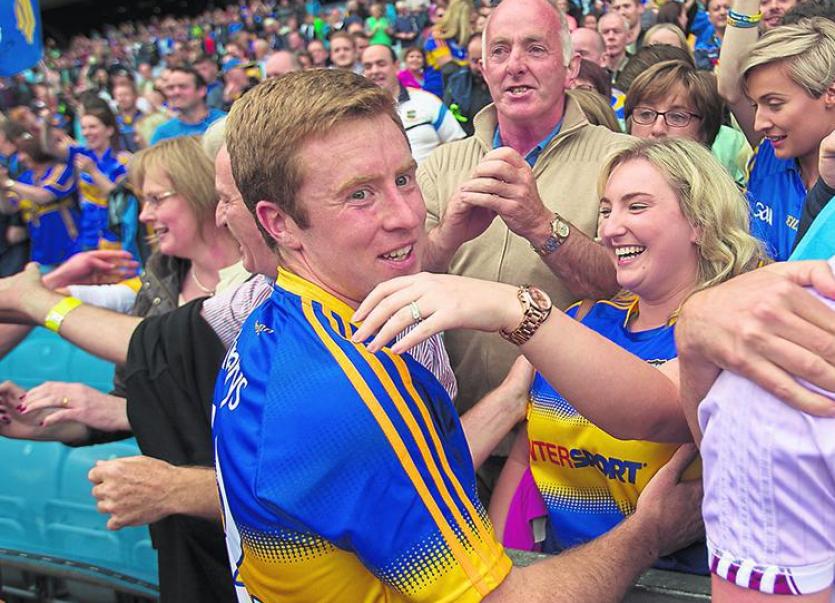 Tipperary senior football captain Brian Fox has revealed his personal disappointment regarding the decision of GAA Congress to support Páraic Duffy's ‘Super 8’ proposal. Under the terms of the Páraic Duffy proposal the last eight teams in the All-Ireland football championship (four provincial champions and four qualifier winners) will be split into two groups of four and play off against each other on a three-year trial basis (2018-20).

The motion was passed (76%) at Congress on Saturday while the proposal was also supported by delegates to the Tipperary County Board (36-20) even though the Football Board, Tipperary players and senior manager Liam Kearns had stated their opposition to the motion.

"I am not happy about it really being honest, but, look, they have put it out there for us and we have got to play it now if we get there. Our focus is going to have to be to get there," Brian Fox said to the assembled press corps following Saturday’s league win over Laois at O’Moore Park, Portlaoise (1-16 to 1-10).

On Tuesday night, February 21st delegates to the County Committee Meeting of Coiste Chontae Thiobráid Árann backed Páraic Duffy's proposal to revamp the senior inter-county football championship. Despite the fact that the Tipperary senior football manager Liam Kearns, the Tipperary senior panel of players and the Football Board (led by chairman Joe Hannigan) were opposed to the motion - delegates voted 36-20 in favour of Páraic Duffy's proposal.

"I don't know the full ins and outs of what happened at the County Board (meeting) - all I know is that it was 36-20 in favour voting for it. And, that's disappointing because they knew how the Football Board felt and how we felt,” Brian Fox said.

"Look, it's definitely a money-making thing. As opposed to seven matches from the quarter-finals - that's four quarters, two semi-finals and a final - now you have fifteen matches. You have twelve quarter-finals, two semi-finals and a final. It's about revenue. Basically, you are making sure that the top four teams every year - Dublin, Kerry, Mayo and Tyrone - are going to be in the semi-final whereas last year, by the luck of the draw, we played Galway in a quarter-final that was not as high profile and as a result we were in a semi-final. That's what I personally think."

The sentiments of the Éire Óg Annacarty man were echoed by playing colleague Robbie Kiely - the Tipperary vice-captain used his Twitter profile on Saturday to voice his opinion on the matter once word filtered through that the motion had been passed at Congress in Croke Park, Dublin.

Super 8 is in!What a load of shite...More games to delay club champs, more money for GAA, would they not just do a Super 32 altogether

And, following Tipperary’s impressive six-point win over Laois on Saturday senior football manager Liam Kearns reasserted his opposition to ‘Super 8’ proposal; a re-structure of the championship which the Kerry man described as “elitist”.

"We are stuck with it now,” Liam Kearns said.

“The administrators have brought it in, the players voice wasn't heard, the managers voices in various counties wasn't heard and we are the ones who are going to have to deal with it now.

“We will just have to build our panel now to a stage where we can compete and that is going to be very difficult. To me even calling it the ‘Super 8’ is elitist - even the name itself,” Liam Kearns added.

"Yeah, really important to bounce back from a Sligo game in which we didn't perform - Sligo was really disappointing," Brian Fox said in reaction to a performance which must be described as Tipperary’s most accomplished this year.

“There is no point in saying otherwise, but we were very poor in some parts of the games against Sligo and Antrim. There were parts of it today when we were really good. Now it was not all good and we have a lot to work on, but it was really good for a bit of it.

"It's a much-improved performance from the first two days, but it's not perfect either. We are happy with what we scored, but we could have scored a bit more. We have a lot to work on, but we are happy to get the two points," Brian Fox added.

Fox also revealed that the panel of players had ploughed through a significant amount of work on the training field since losing to Sligo by a single point.

"We did. There is no point in saying otherwise,” Brian Fox explained.

“We were very disappointed with how we played against Sligo. We really worked on a lot of things on the training ground - our fitness, sharpness, kick-outs. It is part and parcel of it. We have played three games now, the bugs are out (of the system) a small bit and idea is now to improve game on game," Brian Fox said before highlighting the contribution of young players like Jack Kennedy who brought a great energy to this Tipperary team.

"Those young lads have all played in All-Ireland finals, All-Ireland under-21 finals, won All-Ireland minor finals, won Munster medals and they are talented lads. Any group would be glad to have them and thank God they are playing for us. They got their chance and their opportunity and they took it. That's the competition for places that is there and that is probably something that we didn't have last year," Brian Fox revealed.

Now the focus of the Tipperary camp turns to taking on Longford on Sunday, March 5th - Longford presented Tipp with a six-point defeat during last year’s league campaign so you can be sure that an experienced player like Fox will face into that contest with his eyes wide open.

"It's a tricky division - there are no easy games and it's dog eat dog,” Brian Fox said.

“You have to be so ready for every game - if you take your eye off the ball at all you are going to struggle. That's probably what happened to us against Sligo. We took our eye off the ball and we were not fully focused. In fairness to Sligo I thought they were the better team on the day. Their football was a lot better than ours. We have improved. We put a lot of work in for the last couple of weeks," Fox added.