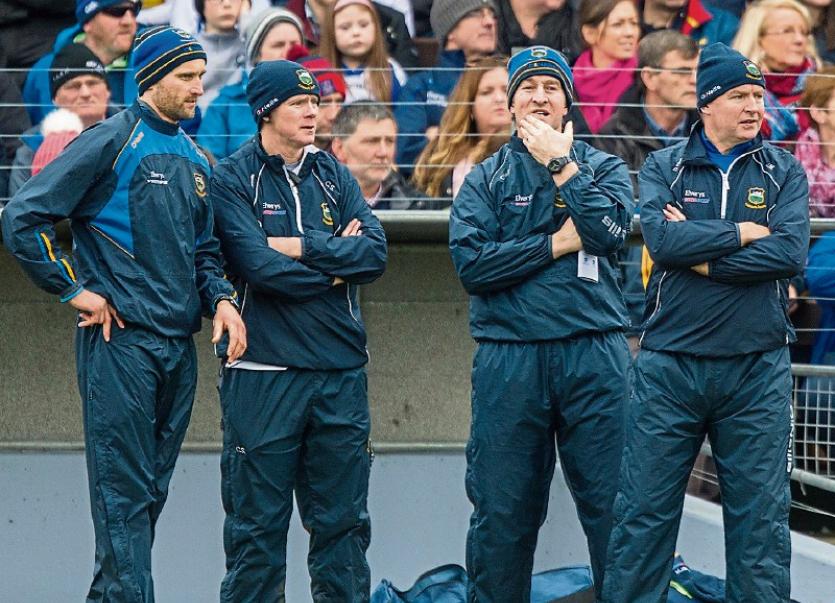 Tipp selectors Declan Fanning, Conor Stakelum, manager Michael Ryan and John Madden have seen their team rise to the top of Division 1A of the Allianz National Hurling League after two games.

Manager Michael Ryan is likely to shuffle his pack for Tipperary's game against Clare in Division 1A of the Allianz National Hurling League on Sunday.

The game starts at 3pm and is the second part of a double header at Semple Stadium, with the Tipp footballers entertaining Longford in Division 3 of the National Football League at 1pm.

After successful trips to Croke Park and Walsh Park in recent weeks, this is Tipp's first home game of the hurling campaign.

They'll have another game in Thurles the following Saturday evening, March 11th, when they take on Kilkenny under lights in a re-match of last year's All-Ireland Final.

Michael Ryan says his approach to the league includes fielding teams that are competitive enough to win points, while at the same time having a look at some of the fringe players.

In that respect he's happy with his team's progress so far. Dublin and Waterford have been beaten with teams that have featured Joe O'Dwyer, Tomás Hamill, John O'Keeffe, Darragh Mooney Niall O'Meara, Aidan McCormack, Donagh Maher, Jason Forde, Barry Heffernan, Daire Quinn and Steven O'Brien, none of whom started last year's All-Ireland Final, although Hamill, Maher, O'Meara and Forde all appeared as substitutes in that game.

Forde tweaked a hamstring against Waterford a fortnight ago and is a doubt for Sunday. The team will be announced later this week.

Understandably, the manager has been keen to stress that the season has only started and he's not getting carried away by his team's promising start to the campaign.

“It’s great where we are at. We are delighted with that but there is still a lot to play for. There are a few more rounds and everybody is going to take points from everybody, there is no doubt about that", he said after his team got the better of Waterford.

After losing their first game away to Cork by seven points, Clare bounced back impressively to defeat Kilkenny by 2-19 to 0-12 in Ennis two weeks ago, a scoreline that represented Kilkenny's largest margin of defeat in the Brian Cody era.

Their main men in that big win were Aaron Shanagher, who scored 1-4 and laid on an early goal for Aaron Cunningham; Podge Collins, who scored two points; midfielder Jamie Shanahan and the full back line of Seadna Morey, Cian Dillon and Oisín O'Brien.

Michael Ryan didn't think it a surprise that Clare had run up such a good score.

"The league is enthralling and you (the media) will have great fun writing about it because it will be unpredictable right to the end, and has been for the past number of years.

Westmeath referee Barry Kelly will be in charge of Sunday's match at Semple Stadium.

There will be deferred coverage of the game on TG4, while the live game on the same channel is the clash of Kilkenny and Cork at Nowlan Park, which starts at 2pm.

The Tipp footballers, meanwhile, got their promotion challenge back on track with a tonic victory over Laois at O'Moore Park, Portlaoise on Saturday evening.

With four points on the board, they'll be hoping to secure their third win of the season against Longford.

“Our promotion hopes fell with them last year when they beat us in Longford by six points. That's a big game now again for us - if you win it you have two weeks to prepare for the Offaly match and you could build up a serious amount of momentum.

Your fitness levels will be getting better and hopefully we can build on that".

Kearns said after the win over Laois "the one thing I liked was that they (the Tipp players) worked hard - they went back to basics. And, that's what we told them: we said lads, we want to go back to basics tonight".