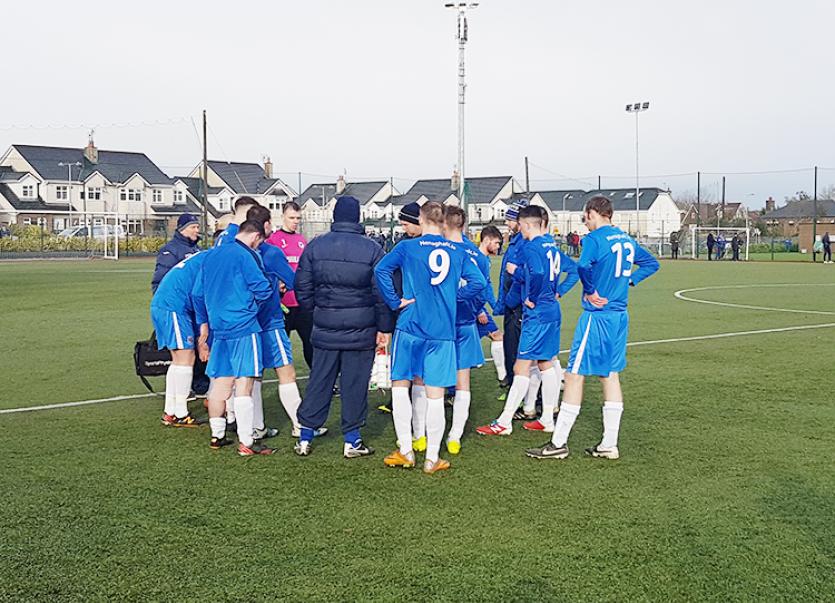 Nenagh AFC suffered penalty shootout heartache at the hands of Fairview Rangers after a dramatic Munster Junior Cup quarter-final played at Annacotty, Limerick on Sunday afternoon. The game finished one-all after extra-time and despite the heroics of goalkeeper Aaron Savage Nenagh AFC lost 7-8 on penalties.

See below for a video of Nenagh AFC’s dramatic penalty shootout with Fairview Rangers.

This enthralling contest was played in Annacotty, Limerick after Nenagh AFC’s home ground, Brickfields, was deemed unplayable. Nenagh AFC, however, did not let that complication put them off against their Limerick District League counterparts.

Nenagh AFC came close to opening the scoring in the ninth minute when Mark McKenna headed Jordan Lewis’ corner just over. This group of Nenagh AFC players are an ambitious bunch and, at times, can play some terrific football, but as Town endeavoured to build from the back in the 11th minute Fairview Rangers won possession deep inside the Nenagh half and notched the opening goal of the game.

The Nenagh AFC team then proceeded to dominate the remainder of the half in terms of possession, but were more than fortunate to avoid conceding a second goal - in the 41st and 42nd minutes Fairview Rangers hit the post.

Nenagh AFC took full advantage of such good fortune in the 46th minute when Dylan Sheahan hooked in a left-footed shot following a scramble in the Fairview area.

A minute into the second half James McGrath came agonizingly close to presenting Nenagh AFC with the lead - McGrath’s left-foot shot reduced the Fairview ‘keeper to a spectator, but, unfortunately, the effort whistled just wide.

Seven minutes into extra-time Fairview Rangers won a penalty which Aaron Savage saved magnificently and we then braced ourselves for a dramatic penalty shoot-out.

Max Boghu, Aaron Savage, Ben Banaghan, Mark McKenna and Barry Coffey all converted from the spot. In sudden death Danny Butler scored before Jordan Lewis saw his effort saved. Lewis was terrific during this contest and it was cruel to see his shot stopped. Indeed, Lewis was vying for the man of the match award alongside James McGrath and Nathan Kelly.

Aaron Savage heroically saved his second penalty of the afternoon to keep Nenagh AFC alive. Thomas Sheppard then converted from the spot before Ryan Gilmartin saw his effort saved and the Fairview Rangers 'keeper belted home the winner.

Nenagh AFC are still flying high in the Limerick District League - Nenagh Town trail Janesboro by a single point with six games to play at the summit of the Premier Division.

Nenagh AFC have already taken six points off Regional United, six off Moyross United and four off Geraldines. Aisling Annacotty have represented a bogey team of sorts for the North Tipperary side (Nenagh lost twice to Aisling in the Premier Division this season).