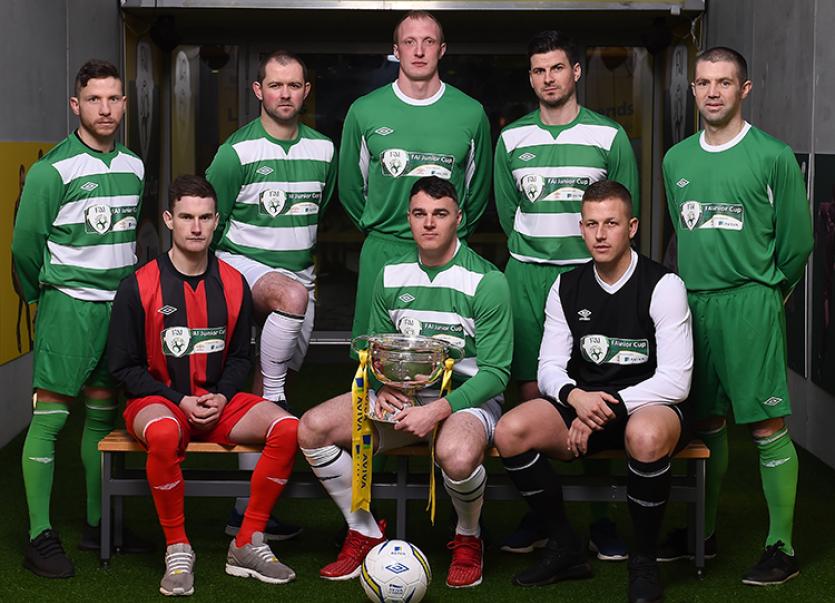 Readers of the Tipperary Star, of course, will focus their attention on the travails of Peake Villa, but the accomplishments of Carrick United are just as noteworthy. Indeed, Carrick will be fancied to beat Boyle Celtic on Sunday. The Waterford League side knows the FAI Junior Cup inside out having won the prestigious competition as recently as 2008 (beating Killester United in the decider) while they lost the 2004 final to Fairview Rangers.

For Peake Villa the challenge posed by Sheriff YC is as significant as they come - the Athletic Union League side are the competition’s defending champions and claimed their third FAI Junior Cup in five years in May 2016 at the Aviva Stadium when the Dubliners beat Limerick’s Pike Rovers one-nil in the final. Sheriff YC lost the 2015 decider to Liffey Wanderers while Sheriff YC beat Kilbarrack United in the 2012 and 2013 finals.

Considering how difficult the competition is to win in the first place this pattern represents an extraordinary achievement. There is simple no getting away from the fact that Peake Villa, despite playing at home, will enter Sunday’s contest as distinct underdogs.

And, this week Peake Villa manager James O’Sullivan has called on the people of Thurles and, indeed, the people of Tipperary to come out and support his side on Sunday.

“It is an exciting week ahead and there is no question about it. We are going in there as the underdogs. So, we have nothing to lose. Nobody expects us to get a result here, but if you want to go on and win it we have to play these guys,” James O’Sullivan added.

The context of the challenge faced by Peake Villa is probably best illustrated by Sheriff YC’s 2-1 win over Usher Celtic in the sixth round of this year’s competition - Usher Celtic, for example, knocked St Michael’s out of their year’s competition. St Michael’s are the defending Munster Junior Cup and Tipperary South & District League Premier Division champions. And, St Michael’s dumped Peake Villa out of the Munster Junior Cup when beating the Thurles side 5-1 at the Tower Grounds.

Peake Villa are, of course, no slouches in their own right and thanks to a resilient display beat Crumlin United 3-2 after extra time to force their way into the last eight of the competition while in the sixth round the Thurles side saw off the famed Cherry Orchard (2-1) - Peake Villa were superb in that contest when their sophisticated team structure and slick approach play caused the renowned Dublin club problems right from the off.

Villa proved themselves especially resilient against Crumlin United. Despite dominating this contest the Thurles side fell behind twice, but stuck to their task admirably and forced extra time thanks to Michael Wade’s equaliser with just three minutes to play. Mathew McKevitt notched one goal six minutes into the second half while the lively centre-forward guided home Gary Lyons’ left-footed delivery in the opening minute of extra-time. 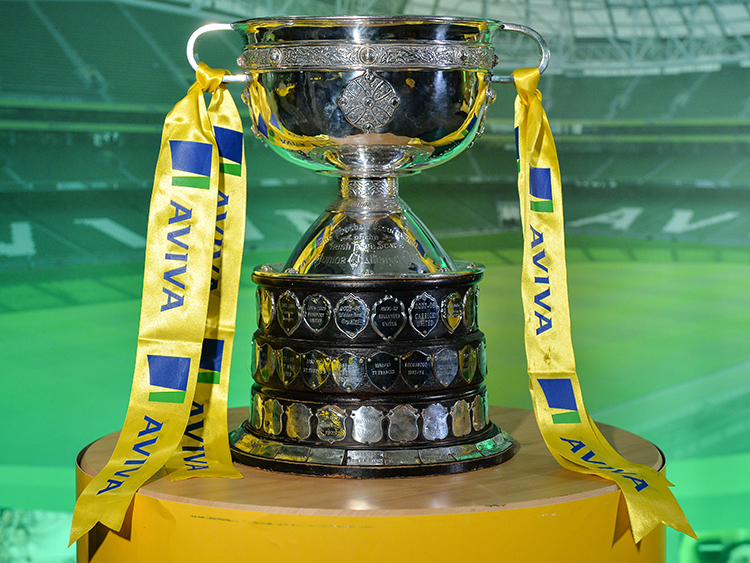 All eyes on the prize: the FAI Junior Cup.

Since the draw was made for the last eight and Peake Villa pulled Sheriff YC out of the hat the excitement in the club and the town has been building. Indeed, James O’Sullivan can’t turn around without someone wishing him and his team well.

“It’s around the club, it’s around the town, it’s everywhere. Everyone is talking about and asking you about the Sheriff game. There is huge excitement and even with the social media side of things it is getting so much coverage,” a thrilled James O’Sullivan explained.

“This is a huge opportunity for players at eighteen or nineteen (years of age) to be playing the top team in the country - it will be a good experience, a good indication of where they are and exactly how good they are. Some of them are really up for it. This is a real shop window for them,” O’Sullivan said.

Peake Villa are managed by James O’Sullivan and feature some terrific players - Stephen Ryan has been excellent in goal during the campaign with Mathew Fogarty, Alan Leahy, Seán Wade, Michael Wade and Dale Loughnane operating in defensive roles. Gary Lyons is a key influence at midfield alongside Keith Cahill and Maris Baltins while Pippy Carroll and Mathew McKevitt present the side with a keen cutting edge.

James O’Sullivan agrees - Peake Villa have not progressed this far in the prestigious FAI Junior Cup by accident.

“We didn’t get here by chance. We are here on merit,” James O’Sullivan told the Tipperary Star.

“We have played it the right way the whole way through the competition. We have worked hard and the results that we got we got by playing football and by playing the right way. It wasn’t down to kicking balls long and clinging on and going to penalties. These guys are all footballers and that’s how we play. And, the one thing that I will tell all of the players is to go out, enjoy it and to believe (in themselves).” 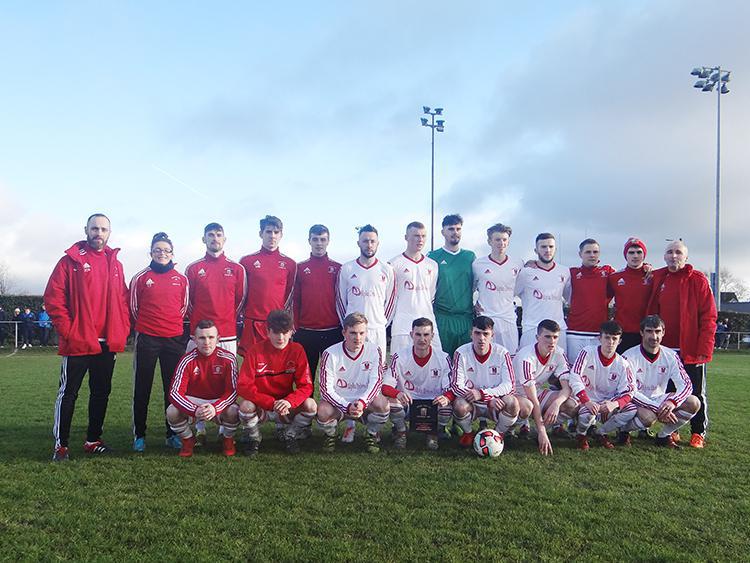 The Peake Villa squad of players which beat Cherry Orchard 2-1.

Peake Villa’s campaign has already featured an impressive 8-0 win over Cullen Lattin before the Thurles side beat Cork’s Knocknaheeny Celtic 4-1 away from home to qualify for the last 32. The Peake Villa campaign also featured a notable victory over North Tipperary & District League champions Nenagh Celtic in the third round.

Now just two wins separate Peake Villa from competing in the final of the FAI Junior Cup which is, of course, scheduled to take place in the Aviva Stadium, Dublin on Saturday, May 13th (7pm).

Peake Villa are the only Tipperary league side to progress to the quarter-finals of this year’s competition. But Tipperary teams do have form in the competition - Clonmel Town won the coveted FAI Junior Cup prize in 1994, St Michael’s took the honours in 1974 and 2014 and Carrick United won it in 2008.

In 2017 Peake Villa celebrates the club’s 50th anniversary (formed 1967). Hopefully James O’Sullivan’s lads can conjure a performance worthy of such a milestone against Sheriff YC.

Assistant manager Jody Brolin has been a huge help to manager James O’Sullivan this season while kit manager Martin Turner performs a key logistical role. And, team physiotherapist Leanne Fogarty will, of course, be working over time this week in order to ensure that James O’Sullivan has a full deck to pick from come Sunday.

This is a massive game for a local junior soccer club and we would appeal to you to get out and support Peake Villa on Sunday. 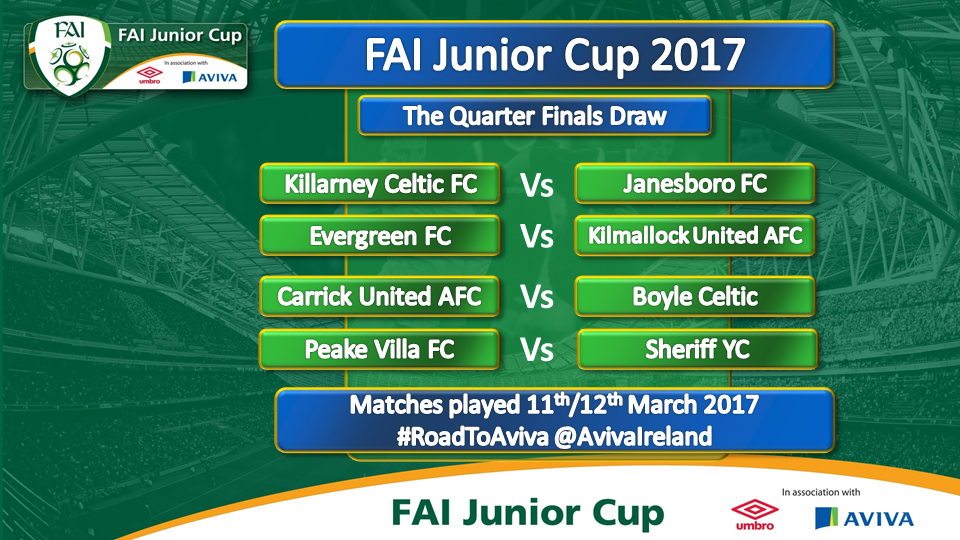