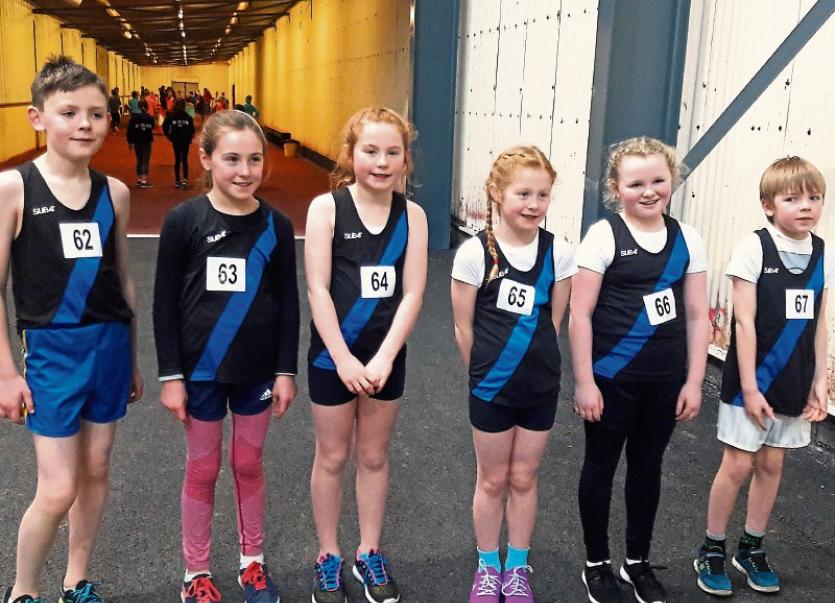 Sunday, March 5, was a red-letter day for athletics in the Friary town with local athletes participating at two different venues in championship events.

Not since the 1980s can we recall this happening in the club. We do remember one Sunday in the past when one bus headed south to Tallow in Co. Waterford and another travelling to Dublin to different events.

On Sunday last we had six juveniles taking part in the Tipperary Indoor Championships at the Nenagh indoor arena. There we had top class performances from the children, resulting in two bronze medals coming to town, compliments of Lucy O'Brien in the U11, 300 meters, and her sister Rosie O’Brien the U9, 60 meters. Harry Barton ran a great heat having a top three finish but his time was not good enough to qualify for the final. Jake Feery had a reasonable run but did not perform as he is able to and will have another day real soon. One to watch!

Emily Mai Ryan was in flying form and showed her eagerness to perform well, but, being a bit young didn’t help her cause in this race. Another one to watch! The same could be said for Tara Moquet who ran exceptionally well but her lack of experience and a slow heat caused her to miss the timing cut.

Congratulations to all and thanks for making another piece of club history. The parents who travelled to the Championship must also be complimented by the club for their help.

At the other end of the ‘age spectrum’ the club had two ‘Master Athletes’ in action in Athlone at the All Ireland indoor championships. Talking about a cauldron of fire would be an understatement to describe this event - unreal and unbelievable might surely describe it. The day got off to a start with the 3,000 meter walk with Miceál McCormack, Kerry Street, strutting his stuff and surviving two yellow cards, went on to take the silver. Bernard Feery, Killusty, was next up in the 800 meter race, but with timing and a mixed group, he didn’t really know who was in his category and was short by two seconds for a medal in that event. Later on that day Bernard took bronze in a very fast 300 meter race and to close took bronze in the 1500 meters in a time of 5.09, taking a few well known heads in the process. Miceál then finished the memorable day for the club with a silver in the shot and a silver in the 28lb weight to follow.

Top marks to the facility and to the personnel who carried out the duties of running the show for the day A really wonderful occasion and great for our sport. Now it’s back to the drawing board to plan for Copenhagen for the European Masters later in the year. Thanks to our club sponsor, Coolmore Stud, for their on-going support in promoting local athletics and national champions.