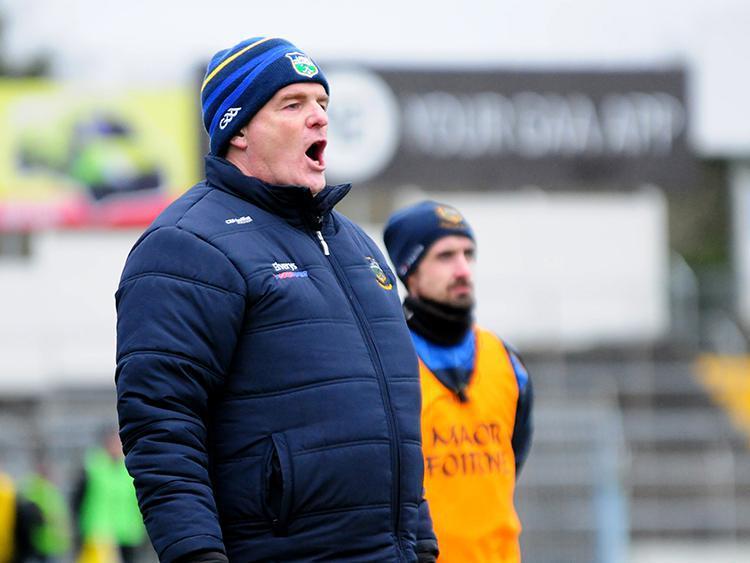 Liam Kearns’ Tipperary, thanks to an eight-point win over Longford on Saturday, have climbed to second place in the division three table and now turn their attention to facing Offaly in Tullamore on Sunday, March 19th.

From here the games come thick and fast - following the encounter with Offaly Tipperary conclude their programme against Louth (at home) on March 26th and away to Armagh on April 2nd. And, nothing will come easy against an Offaly team are facing relegation and recently suffered a thirty-point defeat (0-10 to 6-22) at the hands of Armagh.

"We have Offaly next and they will be hurting after the defeat to Armagh. We have got to win that,” senior football manager Liam Kearns as he considered the fact that recent results appear to have pitted Tipperary, Armagh, Sligo and Louth against one another in the promotion battle.

“It seems to be split there now in the division,” Liam Kearns said.

“There are four teams - ourselves, Armagh, Sligo and Louth - (in the chase for promotion) and then the other four are in a relegation battle. So, every game will count."

Tipperary have encountered Offaly in four of the last six league seasons. Tipperary lost to Offaly in 2013 (1-8 to 2-10 in Tullamore), but strode toward a five-point win (2-11 to 0-12) in 2016 at Seán Treacy Park, Tipperary. Michael Quinlivan and Martin Dunne notched the goals which helped Tipperary into a 2-8 to 0-5 interval lead on that occasion.

In the wake of Tipperary’s 3-17 to 0-18 at Semple Stadium, Thurles on Saturday evening manager Liam Kearns appeared to be reasonably pleased with his side’s display.

"We performed well and I would be happy with our attacking play. We kicked 3-17 and that's good scoring, but at the end of the day they kicked eighteen points as well so we would not be happy with that aspect of it,” Liam Kearns revealed.

“They came back into the game very strongly after a great start by us. We went after them in the first ten minutes or quarter of an hour. We did get scores and we did get a lead. Look, it was a good performance, but at the same time there is room for improvement."

After nine minutes, thanks to goals from Conor Sweeney and Jimmy Feehan, Tipperary led 2-4 to 0-1; a lead that the home side were glad of when a determined Longford fought their way back into the contest.

"Longford are a good team. They are a great team to kick their scores and it was the same last year. They have some very tidy footballers and I thought it was a good game of football. There were some great scores from both teams. And, Longford played their part in that as well. I thought the game was played the way it should be played. There was a lot of scores from both sides, but I would not be happy with the concession of the scores or the amount of scores that we conceded. We just have to look at that," Liam Kearns explained.

"They nailed every chance that they got and that is fair clipping. We dominated possession, but then they got on top in the last quarter of the first half and I thought they came back into it really well. Fair play to them because they could have laid down, but they didn't. I think they are a good team."

Liam Kearns also revealed that he was pleased to see a variety of players get game time - the Tipperary manager’s stated intention this year has been to develop his resources.

"We have a strong panel and we are building the panel all the time. We need that and we knew that after last year. We are getting stronger and we will need everybody," Liam Kearns said.

Longford manager Denis Connerton struggled to explain the slow start of his side - Connerton’s men trailed by nine points after just nine minutes (0-1 to 2-4). And, both goals were conceded reasonably needlessly.

"It was sloppy and it is just taking us too long to get into the game, especially against a team as good as Tipperary. We gave them a start that they didn't need. It is very hard to bring that back," Denis Connerton told the Tipperary Star.

"I don't know if it is down to a lack of concentration or whatever it is. They were really bad mistakes. I am not going to make any excuses tonight. I am just really disappointed with it and the players are exactly the same. There are no excuses and their finishing (Tipperary) was sublime. That's about all I can say: the better team beat us on the night. It's unfortunate, but we have no excuses to offer,” Connerton said.

And, the Longford manager was not prepared to blame his side’s third successive defeat on the fact that last week’s scheduled clash was postponed.

"I don't blame anything - the only thing we can do is look at ourselves. We are not going to blame anybody else. We had the opportunity there tonight to perform, but we gave them a ten-minute start to the game and they, most certainly, don't need that. I don't blame anything at all and I won't make any excuses. We made mistakes and, again, the mistakes cost us. It's as simple as that and I think the best thing for us to do is to concentrate on playing for seventy minutes,” Denis Connerton added.

On three separate occasions in the second half Longford got within three points of Tipperary, but each time Liam Kearns’ men had the wherewithal to find a series of vital scores.

“We are very disappointed with the defeat. There was no lack of effort on our behalf, but the start of games is just so crucial for any team. When you come to the All-Ireland semi-finalists back yard you need to start well. We didn't start well and then that gap was there all the time. We were nine points down early on and we were eight points down at the end. It's very annoying for the players and for myself, but it's one of those things and I have no answer for you. I would not make any excuses. We have as good a bunch of players as you possibly could have in Longford and there are no excuses."