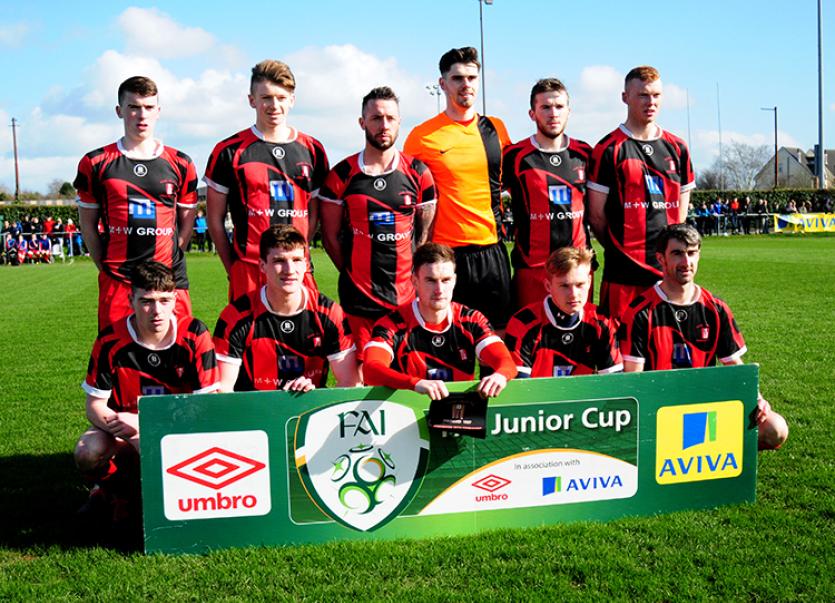 Defending champions Sheriff YC dashed Peake Villa’s FAI Junior Cup dream when they edged out James O’Sullivan’s side in an entertaining quarter-final played at a packed Tower Grounds in Loughtagalla, Thurles on Sunday.

Peake Villa battled hard and played exceptionally well for periods of the game. Indeed, The Tipperary South & District League side fought back gamely from falling behind in the opening half before Billy McCarthy equalised for the home side in the 57th minute. And, Villa were still a real force in this contest when Sheriff YC’s John Rock struck for a game-clinching goal in the 83rd minute.

For Peake Villa the challenge posed by Sheriff YC was as significant as they come - the Athletic Union League side are the competition’s defending champions and claimed their third FAI Junior Cup in five years in May 2016 at the Aviva Stadium when the Dubliners beat Limerick’s Pike Rovers one-nil in the final. Sheriff YC lost the 2015 decider to Liffey Wanderers while Sheriff YC beat Kilbarrack United in the 2012 and 2013 finals.

Peake Villa, with a bit of luck, could have forced extra-time in this encounter, but James O’Sullivan’s men should be proud of their achievements this season. Indeed, it is now hoped that the experience will stand to this group of talented players.

Sheriff YC started this contest in confident mood and kept the ball beautifully for stages of the opening quarter, but Peake Villa enjoyed a notable scoring opportunity in the eighth minute when Dale Loughnane’s cross was flicked on by Mathew McKevitt and although Seán Wade made a good connection Sheriff YC ‘keeper Lee Murphy got a hand to the shot to push it over the bar.

Despite such encouragement the AUL side deserved to take the lead in the 15th minute. Villa ‘keeper Stephen Ryan pulled off a neat save to deny Seán Murphy, but the home side failed to defend the resultant corner adequately and Anthony Murphy headed his side into the lead.

Peake Villa responded well, however, and created a good opportunity in the 26th minute when Pippy Carroll worked the ball to Gary Lyons and his left-footed cross found Mathew Fogarty whose header drifted agonisingly wide.

Pippy Carroll and Gary Lyons combined smartly, once more, in the 43rd minute - this time Lyons’ delivery found Mathew McKevitt and his flick flew wide of the post with Sheriff YC ‘keeper Lee Murphy reduced to the role of spectator.

Three minutes into the second half Gary Lyons tested ‘keeper Lee Murphy with a stinging long-range effort before Stephen Ryan was required to touch Seán Murphy’s shot over the bar in the 49th minute.

Sheriff’s Lee Murphy saved once more from Mathew McKevitt in the 55th minute before Peake Villa got back on terms in the 57th - a brilliant trick and turn from Billy McCarthy carved the champions’ defence open before McCarthy charged forward and beat the ‘keeper with a composed right-footed finish.

With the bumper crowd now involved in this contest Peake Villa, for a time, looked capable of landing a knock-out blow. Sheriff YC, however, dipped into their reservoir of experience and did well to contain an enthusiastic Thurles team. The persistent fouling of Pippy Carroll, however, did check the progress of James O’Sullivan’s team.

Sheriff YC managed to weather a ten-minute storm from Peake Villa before creating a reasonable opportunity in the 71st minute when John Rock steered his half-volley over the bar. Nine minutes later Stephen Ryan was required to make another save and just when our thoughts were starting to turn to extra-time Sheriff YC conjured a winner.

Anthony Murphy flung a long throw into the Peake Villa box in the 83rd minute, the delivery was not dealt with, the ball was allowed to bounce in the area and there was John Rock to hook in a game-clinching goal from less than six yards.

Carrick United were also in FAI Junior Cup quarter-final action on Sunday against Boyle Celtic - the game finished 2-2 and the Roscommon side won on penalties (6-5).

Meanwhile in the Munster Junior Cup St Michael’s progressed to the semi-finals when the Saints won today’s quarter-final 4-2 away to Dungarvan United - St Michael’s are, of course, the defending provincial champions.