Tipperary footballers dig out a big win at O’Connor Park 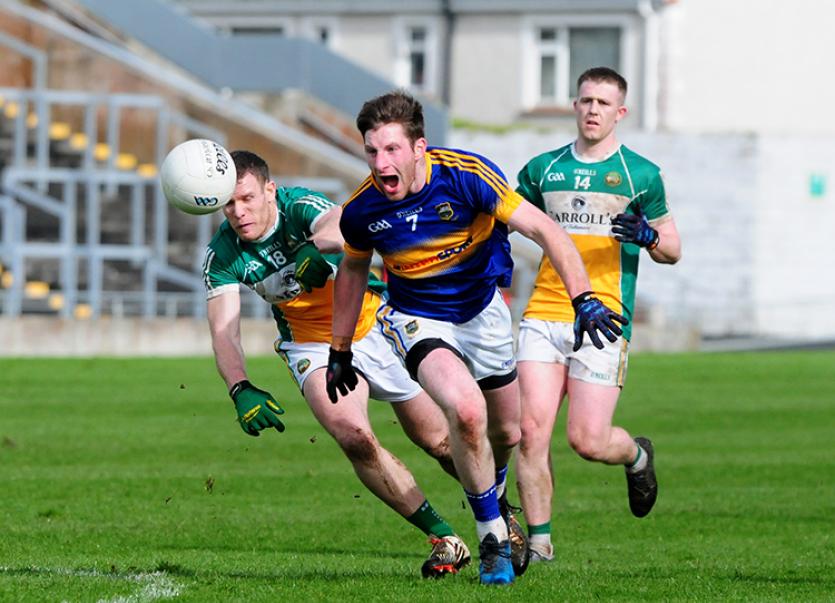 Jimmy Feehan was in determined form for Tipp on Sunday. Photo: Eamonn McGee

A gritty Tipperary team recovered a six-point deficit against a wounded Offaly team in O’Connor Park, Tullamore on Sunday afternoon. The Faithful County faced into this game having suffered the ignominy of losing by thirty points to Armagh and although Pat Flanagan’s men fought their way into a 2-9 to 1-6 lead by the 40th minute Tipperary dug deep and won the remainder of this Allianz National Football League division three contest by ten points (1-9 to 0-2).

Tipperary now lead division three on scoring difference - Liam Kearns’ men (+22) have accumulated eight points from five games and although Louth have also managed four wins the men from the Wee County have a scoring difference of just plus six. With two rounds to play Armagh (seven points) are also within striking distance of promotion while Sligo (five points) have an outside shot. So, considering the circumstances Tipperary’s home game against Louth at Semple Stadium, Thurles on Sunday, March 26th (3pm) is hugely significant (the Premier County will conclude their league programme away to Armagh on Sunday, April 2nd). For Liam Kearns’ reaction to the win over Offaly please click here.

Shane Ronayne’s ladies football team collected their fifth successive league win on Saturday when Tipperary beat Offaly 5-7 to 0-7 while the under-16A team drew with Cork 2-8 to 3-5 having trailed by nine points at the break.

The Tipperary Camogie team followed up their recent victory over Wexford with another single-point success - on Sunday the Premier County beat Dublin 2-11 to 2-10 in Drumcondra.