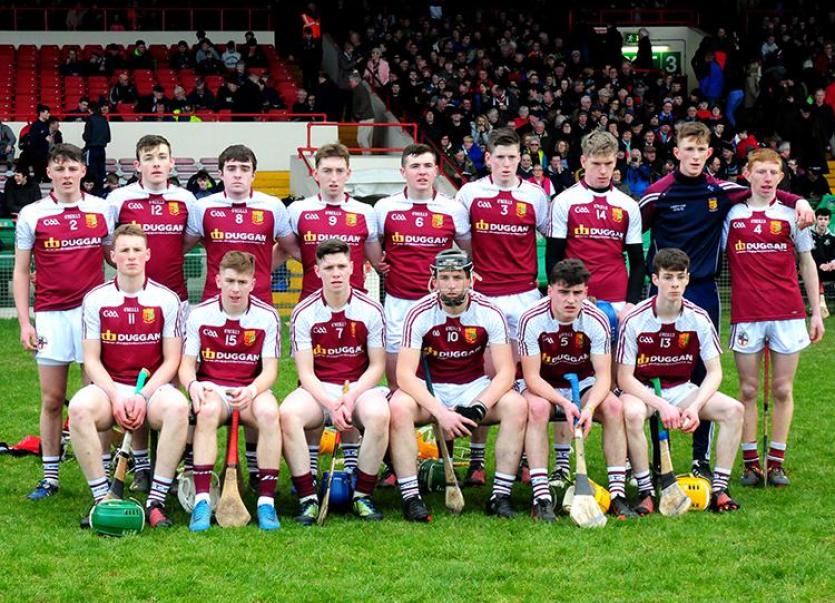 The Croke Cup final between Our Lady's Templemore and competition kingpins St Kieran's College, Kilkenny features in an absolute bumper weekend for fans of Tipperary sport.

St Kieran’s College have won the Croke Cup twenty-one times, five times since 2010 and are chasing an historic four in-a-row of All-Ireland colleges titles. And, now a heroic Our Lady's Templemore team stand between St Kieran's and hurling history.

Tipperary schools have won the Croke Cup just three times - in 1978 Templemore CBS claimed the coveted title when beating St Peter’s College, Wexford 2-11 to 1-4. In 2009 Thurles CBS saw off Good Counsel, Wexford 1-17 to 1-15 and in 2012 Nenagh CBS stormed through the back door before beating CBS Kilkenny 3-10 to 2-11 in the decider.

Saturday's final will be preceded by the All-Ireland B colleges hurling final between St John the Baptist, Hospital and St Mary's CGBS, Belfast (2pm).

Kieran Kingston’s Cork team must beat Tipperary on Sunday, March 26th at Páirc Uí Rinn to stave off their relegation fears (3pm) - Michael Ryan’s All-Ireland champions have already won division 1A of the Allianz National Hurling League and have also booked their place in the quarter-finals. Indeed, prior to this weekend’s round of games Tipperary know that they will face Kerry, Laois or Offaly in the quarter-finals on the week-ending Sunday, April 2nd. Therefore the Tipperary set-up enjoys a rare opportunity to test the depth of their panel.

Ahead of the final round of games only Tipperary are through to the quarter-finals. Meanwhile Clare (+1), Cork (-) and Waterford (-8) are on four points and Kilkenny (-7) are on three while Dublin (-15) are rooted to the bottom of the table on two. However, with the final round of games featuring Clare at home to Waterford, Cork at home to Tipperary and Kilkenny away to Dublin everything, as they say, is still to play for. To be sure of avoiding a relegation play-off Cork must beat Tipperary to keep their noses in front of Dublin and Kilkenny.

Upperchurch-Drombane will hope to get the better of Whitechurch at the second time of asking when the Tipperary men meet their Cork counterparts in the All-Ireland junior B hurling final on Sunday, March 26th at 2pm in Páirc Íde Naofa in Raheenagh, Limerick. The sides previously met in the provincial final when Whitechurch prevailed with three points to spare (0-17 to 1-11).

Upperchurch-Drombane, however, miss-fired a little on the day and will be hoping for a much better performance this time around. Indeed, since Upperchurch-Drombane can call on players like TJ Butler, Andy Kinnane, Jason Jordon, Michael Ryan, Niall Grant, John Quinn and LJ Ryan anything is possible.

Following their four-point win over Offaly (2-15 to 2-11) at O’Connor Park, Tullamore on Sunday Tipp lead division three on scoring difference - Liam Kearns’ men (+22) have accumulated eight points from five games and although Louth have also managed four wins the men from the Wee County have a scoring difference of just plus six. With two rounds to play Armagh (seven points) are also within striking distance of promotion while Sligo (five points) have an outside shot.

So, considering the circumstances Tipperary’s home game against Louth at Semple Stadium, Thurles on Sunday, March 26th (3pm) is hugely significant (the Premier County will conclude their league programme away to Armagh on Sunday, April 2nd).

Due to the postponement of the game against Longford Tipperary will play their third game in as many weeks on March 26th and, as a result, the injury profile is starting to grow.

A wet and windy Ballycumber, Offaly was the venue last weekend for the fifth round when the Tipperary ladies beat their hosts 5-7 to 0-7.

Tipperary will play Waterford in the All Ireland Minor Camogie Championship at The Ragg Camogie Field on Sunday, March 26th - this is a must-win game for the minors to stay in championship.

Nenagh Ormond, who are chasing promotion from division 2A of the Ulster Bank League, are this week preparing for a vital clash with Highfield - Nenagh will host their Cork counterparts on Saturday, March 25th at 2.30pm.

Banbridge lead the division by two points from Highfield. Nenagh Ormond trail Banbridge by six points, but hold a game in hand over Banbridge. Highfield also have a game in hand on Banbridge while Malone also have an outside chance of forcing their way into a play-off spot (the top sides in the division earn promotion). With four games to play there is little margin for error and, therefore, Nenagh Ormond need to beat Highfield on Saturday whom they trail by four points.