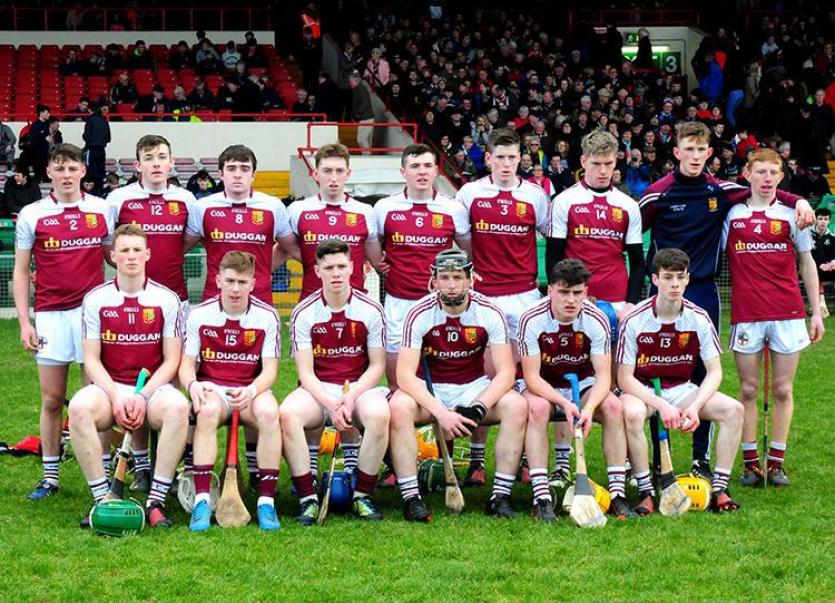 Our Lady’s Templemore were crowned Croke Cup champions after an extraordinary final played at Semple Stadium, Thurles on Saturday evening.

Well before the end of this enthralling contest it was clear that whoever would win would be worthy All-Ireland champions. When sporting competitions are conceived, the ideal is that a team will be crowned the champion after deservedly conquering a talented rival in a tense decider. Frequently finals fall short, but on Saturday Our Lady’s and St Kieran’s truly delivered.

The 3,603-strong attendance was treated to excruciating drama. Just consider the trajectory of this final: a Brian McGrath goal helped Our Lady’s into a 1-7 to 0-6 advantage, then St Kieran’s hit back with 2-2 either side of the break to surge four clear (2-8 to 1-7). Templemore battled their way back into contention, but, once more, St Kieran’s surged clear and led by a goal with twelve minutes to play (3-9 to 2-9). By now supporters of Our Lady’s Templemore must have had their fingernails chewed all the way to Carrick-on-Suir. Could their heroes retrieve the situation? The answer: yes. In a stunning display of raw grit Our Lady’s hit 1-4 without reply in a devastating eight-minute period. St Kieran’s tried valiantly to respond, but when referee Colm Lyons blew his final whistle the Our Lady’s players jumped into each other’s arms and the out-pouring of emotion in response to this final win was heart-warming.

Understanding the context of this success is critical in order to appreciate the scale of the accomplishment. The game was billed as an allegory: David versus Goliath they said. And, the billing was fair. St Kieran’s were chasing a 22nd Croke Cup and an historic four in-a-row against a secondary school drawing from a male pupil population of less than 250. St Kieran’s, cast in the role of Goliath, were expected to drop a boulder on the head of Our Lady’s, but the Templemore lads responded to every question asked of them and refused to be beaten. The Our Lady’s lads played with an unforgettable fire.

Eoin Collins, Pádraig Campion, Diarmuid Ryan, Ray McCormack, Jerry Kelly, Brian McGrath and Lyndon Fairbrother were terrific for Templemore, but every unlikely triumph needs its unlikely hero and Our Lady’s found that man in Aidan O’Meara who stepped in at centre-back and played the position beautifully. O’Meara was exemplary and who will ever forget Aidan’s extraordinary long-range point off his left in the 54th minute?

And, while O’Meara was the outstanding candidate for the man of the match award team captain Paddy Cadell’s tussle with St Kieran’s star Adrian Mullen was key to this success. Right from the off Cadell man-marked Mullen - where one went so did the other. Mullen did do damage, but you would have to wonder what the Ballyhale Shamrocks star might have got up to had Cadell not marked him in such an accomplished manner.

Martin Keoghan set up Ted Drea for the opening point of the game and there was still time remaining in the opening minute of this final for Diarmuid Ryan to drill over a right-handed equalizer.

St Kieran’s were punished for defending a sideline sloppily in the seventh minute - David O’Shea gathered possession at his ease, swiveled and fired Our Lady’s Templemore in a 0-2 to 0-1 advantage. Seconds later Eoin O’Shea landed an impressive right-handed shot to tie it up before an Adrian Mullen free forced St Kieran’s into a 0-3 to 0-2 lead.

Despite playing into the breeze Our Lady’s struck for the opening goal of the game in the 12th minute - David O’Shea broke Stephen Nolan’s delivery and although Brian McGrath failed to initially gather the ball the Loughmore-Castleiney man kept his head and beat Dean Mason in the St Kieran’s goal with a left-handed pull. Two minutes later McGrath converted a free following a foul on Jerry Kelly and Our Lady’s led by three (1-3 to 0-3).

St Kieran’s responded like champions to the challenge with Daithí Barron shortening his grip beautifully to score a smashing point before Ciarán Brennan notched another off his right in the 19th minute.

Lyndon Fairbrother grabbed a Diarmuid Ryan delivery in the 23rd minute and scored off his right as Templemore’s determination to play the ball first-time into their full-forward line yielded another dividend. Soon after it was the turn of Stephen Nolan to set up Jerry Kelly for a great score before Brian McGrath hoovered up a break in the middle of the field, strode forward and landed a point off his right to present Our Lady’s with a 1-6 to 0-5 advantage by the 25th minute.

This was encouraging stuff from Our Lady’s. Despite operating without Cadell at the heart of the defence the half-backs were performing admirably well; the JK Bracken’s man was doing a terrific job on Adrian Mullen and when Pádraig Campion made an impressive grab in the 26th minute it appeared as if Our Lady’s were well on their way to winning this contest.

Eoin O’Shea and Brian McGrath (free) traded points before Ciarán Brennan collected a break in the 32nd minute and rifled a glorious shot into the roof of the Templemore net from an impossible angle. At the break Our Lady’s led by one (1-7 to 1-6).

St Kieran’s altered their approach significantly after the break. The defending champions opted to play two (and sometimes one) inside while their remaining lines worked back the field. That structure allowed Martin Keoghan to sit on the St Kieran’s 45-yard line and the Kilkenny college earned an immediate dividend. Indeed, in the 32nd minute Ciarán Brennan raced onto a break following Dean Mason’s puck-out and passed to Adrian Mullen who kicked home a goal. Eoin O’Shea swung over a stunning sideline a minute later and when, in the 35th minute, Daithí Barron set up Evan Shefflin for another point St Kieran’s, suddenly, led 2-8 to 1-7.

St Kieran’s had now scored 2-2 without reply either side of the break and although the four-point deficit was manageable the shift in momentum was a real concern for Our Lady’s. Templemore needed a tonic and found one in the 39th minute when Lyndon Fairbrother cracked a stunning effort into the roof of the St Kieran’s net - a glorious shot which left the St Kieran’s ‘keeper Dean Mason wondering what had just happened. David O’Shea earned his team a ’65 in the 40th minute and when Brian McGrath converted the opportunity the sides were level (2-8 apiece).

With St Kieran’s now ideally set-up to deal with Templemore’s back-to-front deliveries and then counter-attack the Our Lady’s lads were still struggling to wrestle the initiative away from the defending champions. Indeed, St Kieran’s struck for a third goal in the 43rd minute - the three-pointer originated with a counter-attack; Seán Ryan’s flick found Ciarán Brennan who, in turn, picked out Adrian Mullen. The St Kieran’s captain created the room for Diarmuid Phelan to shoot and although Eoin Collins saved brilliantly Mullen flicked home the rebound. Brian McGrath (‘65) and Diarmuid Phelan traded points soon after, but Our Lady’s looked a little distressed (2-9 to 3-9) with time running out.

The novelist Raymond Chandler one famously suggested a technique to writers that when a plot starts to flag have a man come through the door with a gun in his hand. Against a massed St Kieran’s defence Our Lady’s needed someone to do something drastic and, in the 49th minute, Ray McCormack shook off three would-be tacklers and buried his shot to tie the game. The Borris-Ileigh man punched the air in celebration and Our Lady’s were flying once more.

Brian McGrath then presented Our Lady’s with the lead before an alert Ray McCormack intercepted a St Kieran’s puck-out, earned himself a free and Brian McGrath converted to leave two between them. Then, in the 54th minute, came the score of the game. With St Kieran’s funneling back deep to protect the heart of their defence centre-forward Brian McGrath drifted out into the middle third and was there to support Aidan O’Meara as he emerged from the Our Lady’s half with ball in hard. O’Meara played a neat one-two with McGrath and then, from half-way near the sideline, landed a magnificent point off his left.

Our Lady’s ‘keeper Eoin Collins, despite having to deal with a troublesome low-lying evening sun, saved brilliantly from the raiding Ciarán Brennan in the 57th minute before Adrian Mullen’s converted ’65 left three between them.

St Kieran’s then fired two poor wides before Eoin Collins, in a frantic finish, was required to make another telling save, this time from Pádraic Mullen. Then, in the 62nd minute, Eoin O’Shea lobbed in a ’65 and, following a goalmouth scramble, Daithí Barron fired over his side’s 11th point.