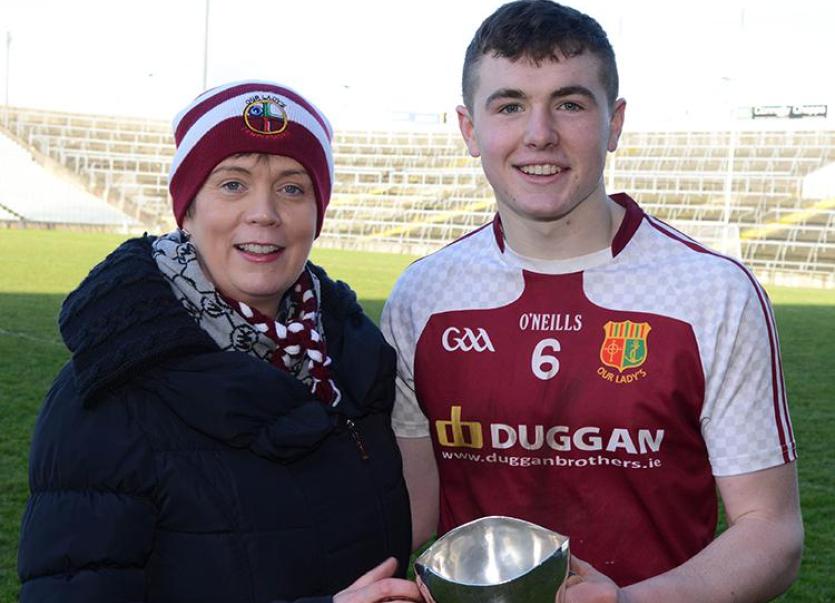 The dynamic duo of joint-managers Tom Byrnes and Noel Fogarty guided Our Lady’s Templemore to an extraordinary 3-13 to 3-11 win over St Kieran’s College in an enthralling Masita All-Ireland Post-Primary Schools Senior A Hurling Championship final at Semple Stadium, Thurles on Saturday evening.

St Kieran’s asked Our Lady’s a series of stern questions in the Croke Cup final, but, each time, the Templemore lads responded. Indeed, during the game the initiative appeared to have been wrestled away from Our Lady’s entirely - St Kieran’s led by a goal with twelve minutes to play (3-9 to 2-9), but Templemore hit 1-4 without reply in a devastating eight-minute period and surged toward a famous win.

Standing on the Semple Stadium turf following this enthralling affair joint-manager Tom Byrnes looked as proud as any man could.

“I was trying to sum it up in my own head - they just refused to be beat. That was the bottom line: they were not going to give in,” Tom Byrnes told the Tipperary Star.

“I think everyone put their shoulder to the wheel and it was a phenomenal effort. Even the lads who were coming in off the line; they got into it straight away. I am not on about scores - it was about contributing to the game. It is some way to top off the year.

"Most champions have that will to win and just are not going to give in no matter what. Whether it is horse racing or anything, it is the horse who keeps sticking his head out in front and with hurlers it is the same thing. They just refused to be beat. They showed that today and if you back through the year you will see that we earned it the hard way,” Tom Byrnes said.

“Pat has great experience and he has been helping me for years at matches,” Tom Byrnes explained.

“It is great to have that experience on the line and all the young lads know him. His encouragement is phenomenal and Joe Gallagher is brilliant as well. He is coaching and he is getting stuck in with every age group in the school with hurling. We are fierce lucky to have him. We have small numbers of male staff, but the likes of Joe are driving it on. So, everyone is a vital cog in getting over the line.”

Tom Byrnes was also eager to highlight the contribution of fellow joint-manager Noel Fogarty who was a key member of the 1978 Templemore CBS team which won the Croke Cup. Then, as now, Noel Fogarty performed a key role in this success.

"It's great that we have Noelie (Fogarty) and that connection,” Tom Byrnes said.

“He has been fantastic - his attention to detail is phenomenal. They definitely would not be here today if it wasn't for him.”

"Elated, absolutely elated,” Noel Fogarty said as he was asked to put words to how he was personally feeling.

“We had to dig deep for that today a few times. We got a hammer blow just before half-time and they took over for the first ten minutes of the second half, but the lads really dug deep," Noel Fogarty said as he attempted to trace his memory back along the extraordinary trajectory of Saturday’s thrilling final.

"We eventually got to grips with them and I think we dominated the last ten minutes. We said to them that it would come down to the last ten minutes and that's the way it turned out," Noel Fogarty added before explaining how proud he was of the contribution made by each and every one of the panel.

"Absolutely, absolutely - they were fantastic. We could not have asked of more from them,” Noel Fogarty said.

“And, we are thrilled for them. I would say that very few people gave us a chance coming up here today - St Kieran's were going for four in-a-row. So, it's brilliant, absolutely brilliant."

Noel Fogarty also revealed that such was the quality of St Kieran’s forward Adrian Mullen that Our Lady’s had no choice, but to man mark the Ballyhale Shamrocks star with the Templemore captain Paddy Cadell.

"In fairness to the chap (Adrian) Mullen he is a class act and we knew that we could not give him free rein. We took our best back man and decided that he was going to follow him no matter what," Noel Fogarty explained.

"He's an extremely good forward and there has to be extra attention given to him because he is a step ahead,” agreed Our Lady’s team captain Paddy Cadell as the JK Bracken’s star reflected on his personal battle with St Kieran’s Adrian Mullen.

“We knew that he was the danger man. Everyone was talking about Adrian Mullen and he was on the Kilkenny minors last year. But, look, every one of the St Kieran's lads are extremely strong and every one of our backs had to be in top form and, thankfully, they were on the day."

Paddy Cadell won an All-Ireland minor hurling championship with Tipperary in 2016, but said that it was difficult to compare the success enjoyed in the blue and gold at Croke Park with this latest achievement in the colours of Our Lady’s Templemore.

"I don't know if you can compare the two; I just know that when you are in there with those lads that they will die for you and I would die for them. It is an amazing feeling,” Paddy Cadell explained to the Tipperary Star.

"It is always a tough game playing St Kieran's. We knew they were going to die for each other because that's the sort of spirit that they bring. So, I suppose we had to try and match that. Thankfully, on the day, the lads did," the Our Lady’s Templemore captain said.

"It is just an amazing feeling to get over the line. It was an extremely tough game and, I suppose, just getting over the line was the main thing," Paddy Cadell added.