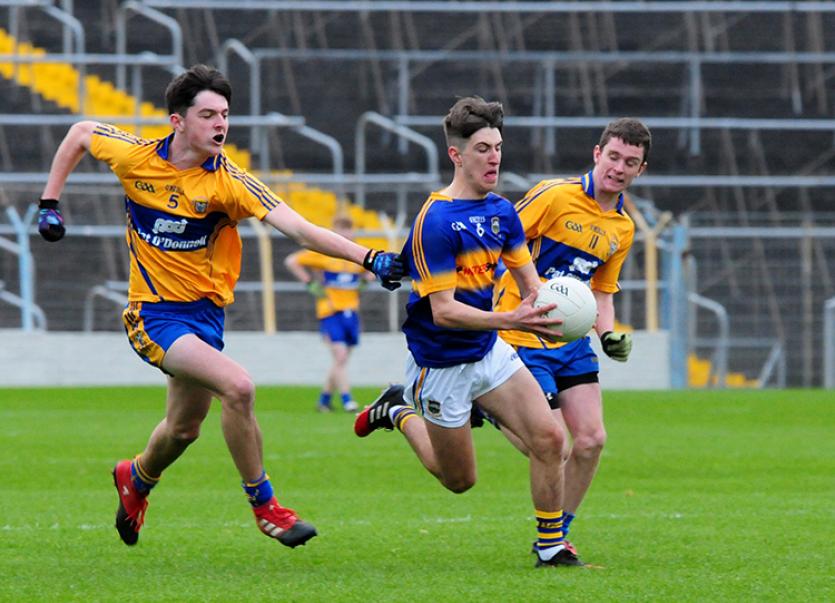 Tipperary held off a late rally from a determined Clare side in a Munster Under-17 Football Championship quarter-final played at Semple Stadium, Thurles on Tuesday evening.

The Premier County appeared a smashing football team who had the good sense to work for one another and were good value for a 0-8 to 0-2 interval lead. Clare, however, fought their way back to within three points of their hosts in the second half, but Tipperary were the more accomplished outfit and now prepare for a semi-final against Kerry on Tuesday, May 2nd in Austin Stack Park, Tralee.

Tipperary signalled their intent when Cian O’Sullivan set up Ian Holloway for the opening point inside twenty-four seconds. Four minutes later Rian Quigley added a left-footed effort and the home side led by two before Clare hit back with a Morgan Garry point in the tenth minute.

An excellent Darragh Tynan brace in the 12th and 13th minutes left three between the sides before Adam McGrath set up Cian O’Sullivan for another lovely Tipperary point in the 14th. And, while the Tipp attack was catching the eye Dara O’Leary and Marcus McFadden, both members of the full-back line, had already made impressive bursts forward.

Rian Quigley was fouled for a free, which Darragh Tynan converted, before Tynan added another from play in the 19th minute (0-7 to 0-1).

Even though Clare had opted to play a sweeper Tipperary had already managed nine shots in twenty minutes - the sweeper system is designed, in theory at least, to keep the opposition’s inside forwards off the ball, but Tipp’s Darragh Tynan, for instance, had already notched three points from play.

Séamus Casey (free) kicked Clare’s first point in fifteen minutes in the 25th before a determined burst and point from Conor Ryan helped Tipperary into a 0-8 to 0-2 interval lead. The first half concluded with us admiring a six-point advantage for Tipp and also the energy of players like Ian Holloway and Mark Stokes who were working especially hard for the cause.

Seven minutes into the second half Conor Ryan extended the lead to seven points before Mark Stokes dispossessed a raiding Clare forward brilliantly in the 38th minute - Thomas Clancy had goal on his mind, but Stokes’ intervention was outstanding. Soon after Adam McGrath added another point from play and Tipperary led 0-10 to 0-2 - it is also worth noting that all of the Tipperary starting forwards had now scored from play.

David McNamara notched Clare’s third point in the 40th minute before enterprising Tipperary corner-back Manus McFadden was rewarded for his lung-bursting support runs when booting over a smashing point in the 42nd minute (0-11 to 0-3).

Two points from Séamus Casey (one free) dragged Clare to within six by the 46th minute (0-11 to 0-5), but Tipperary created a great goal-scoring opportunity for Mark Stokes in the 47th only for Morgan Garry to haul down the midfielder and earn a black card for his trouble. Rian Quigley, a key creative influence on this Tipperary team, converted the resultant free (0-12 to 0-5).

Playing with the breeze there was still time for Clare to mount a late charge and the Banner were encouraged by points from Cian Meaney, Philip Talty and David McNamara which closed the gap to four (0-12 to 0-8).

In the 55th minute Cian O’Sullivan set up Rian Quigley for a left-footed point which was important given Clare’s momentum. The Banner, however, came back at Tipp in waves and following two Seán Conway frees the visitors trailed by three (0-13 to 0-10) entering five minutes of injury time.

Rian Quigley had proven himself a key leader for Tipperary all evening and the Moyle Rovers man stroked over a game-clinching free in the 62nd minute.

The management team which will guide the fortunes of both the under-17 and minor football teams this season is: manager Matt Doherty (Arravale Rovers), coach-selector David Power (Kilsheelan-Kilcash), coach-selector Mick O’Sullivan (Drom & Inch) and selectors Johnny Nevin (JK Bracken's) and Dónal Hayes (Upperchurch-Drombane).