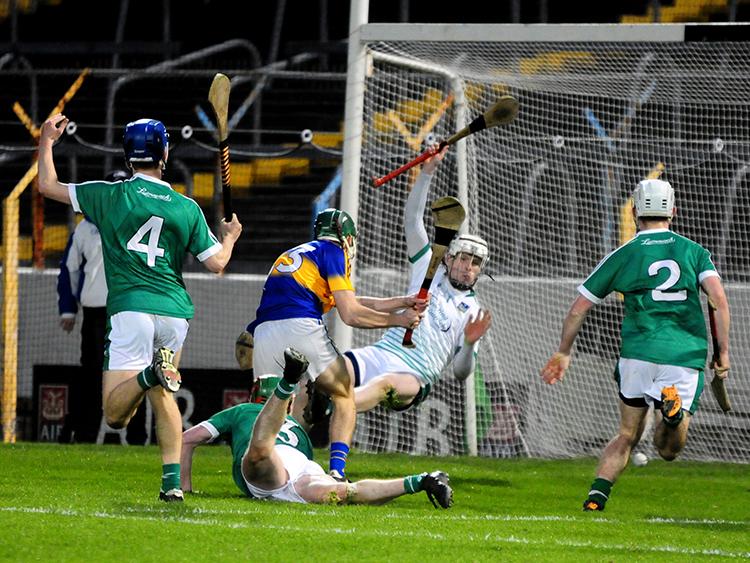 A resilient Limerick side recovered a seven-point second half deficit to take the lead for the first time in the 58th minute and then extended their advantage to two on the hour mark. The defending Munster and All-Ireland champions were in deep trouble and beads of cold, cold sweat broke out across worried brows right around Semple Stadium.

Cool heads were required and were found. In second half injury time Anthony McKelvey stroked over a free to close the gap to one, Jake Morris notched a smashing left-handed equaliser a minute later and then, at the very death, Willie Barry and Conor Bowe combined beautifully before Niall Hoctor fired home the game-clinching goal in a memorable finish in front of 2,567 paying spectators.

If Tipperary, however, are to win a 40th provincial minor title in 2017 this group of players need work. The delivery forward from the half-back line was not as considered as it might have been. Indeed, this whole team needs a might more seasoning before facing into a Munster semi-final on June 28th.

Anthony McKelvey set up Andrew Ormond for the opening point of the game in the first minute before Paul O’Brien responded with a smasher off his right for the Shannonsiders. Then it was the turn of Conor Bowe and Limerick’s Paul O’Brien (free) to exchange efforts before Conor McCarthy raced through in the sixth minute, shortened beautifully and beat ‘keeper Bryan Curtin from close range (1-2 to 0-2).

Conor McCarthy won a free, which Anthony McKelvey, converted soon after, but what really roused the home support was a turnover won in the middle of the field in the ninth minute when Jake Morris, Conor Bowe and Kieran Breen swallowed up a Limerick player and impressively forced an over carry. It appeared as if this group of Tipperary minors were working to forge a healthy identity for themselves.

Limerick, however, responded well with points from David Woulfe and Dylan O’Shea which cut the Tipperary lead to two, but the home side responded in kind with efforts from Conor Bowe and Conor McCarthy.

Although Tipperary were hurling reasonably well corner-backs Michael Purcell and Jerome Cahill had already performed eye-catching dispossessions of raiding Limerick players. Tipp counter-attacked from one such turnover, worked the ball forward and Jake Morris helped the Premier County into a five-point advantage. Then, in the 16th minute, Conor McCarthy added another and Tipp led by six (1-7 to 0-4).

Limerick played a number of different systems during this contest and when the side coached by Anthony Daly added a third midfielder the Shannonsiders duly locked down the middle third of the field like a vice. Indeed, eleven minutes later Limerick had out-scored the home side 1-4 to 0-1 and tied the game (1-8 apiece) by the 27th minute.

An incredibly harsh free awarded against Michael Purcell set Limerick on their way. Full-back Michael Feehan was staring for Tipperary, but irrespective of the Seán Treacy’s man dominance on the edge of the square Limerick added scores through Paul O’Brien, Dan Minehan and Ronan Connolly to close the gap to two (1-7 to 0-8) by the 25th minute.

A superb Anthony McKelvey catch and point offered a reprieve for Tipperary, but Ronan Connolly picked out Dylan O’Shea who rifled home an equalising goal in the 27th minute.

In first half injury time Tipperary scooted away from Limerick. First, Andrew Ormond won a free, which Anthony McKelvey converted, before a sensational diagonal delivery from Jerome Cahill picked out Conor McCarthy and the Nenagh Éire Óg man presented Liam Cahill’s men with a two-point advantage. Then, in the third minute of injury time, Jake Morris’ cross picked out Andrew Ormond. The JK Bracken’s star opted to go for goal even though he had an unmarked Anthony McKelvey in support to his right. Ormond’s initial shot was blocked, but the corner-forward gathered the rebound and goaled from close range. At the break Tipperary led 2-10 to 1-8.

Sixteen seconds into the second half Tipperary hit Limerick with another sickening blow - this time Andrew Ormond took advantage of the support runner, fed Willie Barry and the Cappawhite man delivered a third three-pointer (3-10 to 1-8).

Limerick responded with an admirable show of raw grit. In the 33rd minute Dylan O’Shea drilled home his second goal before Paul O’Brien added a brace (one free). Conor McCarthy, who was threatening to score another goal, was fouled for a free which Anthony McKelvey converted in the 40th minute to force Tipperary into a 3-11 to 2-10 lead.

Points from Dylan O’Shea, Paul O’Brien (a free from his own ’65) and David Woulfe left one in it before Anthony McKelvey enjoyed a goal-scoring opportunity in the 48th minute, but steered his shot wide following enterprising work from Willie Barry. Nonetheless Cathal Bourke beat his man with a lovely step in the 49th minute, fired a neat point and Tipp led by two (3-12 to 2-13).

David Woulfe’s third point from play and a long-range effort from Kieran Breen ensured that Tipperary led by two (3-13 to 2-14) with five minutes to play.

Limerick, however, were far from finished and with centre-forward Paul O’Brien dropping into midfield and causing Tipp a variety of problems the Shannonsiders fired over four points to take a 2-18 to 3-13 lead into injury time (all four scores came from placed balls, one ’65).

By now Tipperary trailed the free count 6-14, but there was no time to worry about such injustice. And, to be fair the defending All-Ireland champions settled down to their work. An Anthony McKelvey free steadied the home side before Cathal Bourke set up Jake Morris for a delicious left-handed equaliser in the 62nd minute.

And, as we braced ourselves for extra-time an alert Willie Barry picked out the run of Conor Bowe and the Moyne-Templetuohy man, in turn, played in Niall Hoctor who beat the Limerick ‘keeper from close range.

The Shannonsiders enjoyed two final attacks to rescue the situation, but the Tipp defence saw the final exchanges out in an assured manner.