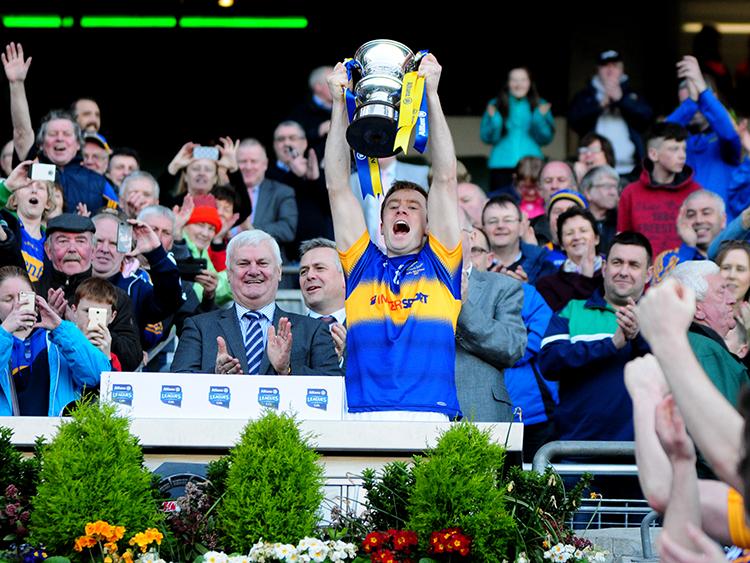 And, this was impressive stuff from the Tipp men. Despite a slow start the Premier County created a whole raft of goal-scoring opportunities, fired nineteen points, hit fifteen wides and dropped two shots short in an accomplished display of attacking football.

Accumulating thirty-six shots at the opposition posts is good going. And, as you would expect star forwards Conor Sweeney and Michael Quinlivan got through some eye-catching work. In the end Quinlivan collected the TG4 man of the match award, but it could just as easily found its way to Sweeney. It is getting increasingly difficult not to resort to hyperbole when describing the feats of this duo, especially no occasions like this when they reduce an opposition defence (which featured a sweeper) to chopped liver. On Saturday Sweeney and Quinlivan were pointed at the opposition and fired - between them they notched 2-8.

Tipperary, of course, adopted their own defensive structure with Brian Fox supplementing the efforts of the back six. And, the work rate of this Tipperary team was exceptional. We know all know about the attacking pedigree of the side, but this Tipperary team have a hard edge too. At Croke Park Tipperary won the turnover-in-the-tackle stat 25-13. Now that’s a team that means business.

Louth made an impressive start with points from Andy McDonnell, Declan Byrne and Pauric Smith forcing the men from the Wee County into a 0-3 to no-score lead inside the opening four minutes.

Tipperary fired three wides during this period and also spurned a goal-scoring opportunity in the ninth minute when Michael Quinlivan’s burst of speed carved the Louth defence open. Quinlivan found Robbie Kiely in support, but the centre-back elected to pass (intercepted) when a potential shot looked the more enlightened option and Craig Lynch’s goal survived.

A Conor Sweeney free got Tipperary off the mark before Liam Casey notched the Premier County’s first point from play in the tenth minute.

Considering how Robbie Kiely suffered at the hand of the black card in the 2016 All-Ireland semi-final the Carberry Rangers man must have allowed himself a wry smile in the 15th minute when, just as Louth had pieced together an attack of note, Emmett Moloney performed a reasonably cynical foul. Moloney earned a ticking for his trouble when the infraction appeared a solid candidate for the black card. Ryan Burns converted the resultant free and when Tommy Durnin added a left-footed point Tipp trailed 0-2 to 0-5 with seventeen minutes played.

Michael Quinlivan responded with a converted free for Tipp, but a Pauric Smith point in the 19th minute forced Louth three clear. Kevin O’Halloran converted a 45-metre free in the 21st minute and Tipperary were glad of it. Louth hit back with another point from Eoin O’Connor in the 25th and Colin Kelly’s side led 0-7 to 0-4.

Although Tipperary were not playing especially well Liam Kearns’ men were leading the turnover-in-tackle stat 6-3 and several attacking moves appeared just one pass away from carving Louth open.

Then, just like that, Tipperary exploded into devastating life and a sensational five-minute period saw the Premier County hit 1-5 without reply. Bill Maher set up Conor Sweeney for the opening score of the onslaught in the 26th minute before Kevin O’Halloran landed another free from forty-five metres. Jack Kennedy swung over a Tipperary equaliser in the 29th minute, but Tipp were far from finished. Indeed, within seconds Conor Sweeney booted his side into the lead.

Then, in a real illustration of Tipperary’s pedigree, Conor Sweeney set up Liam Casey who finished off his right for the opening goal of the game. Tipp were pressing the Louth re-start to terrific effect and profited handsomely from another opposition re-start in the 30th minute when Alan Campbell helped himself to a point (1-9 to 0-7).

And, for all the admiring of Tipperary’s attacking play the fact that Liam Kearns’ men now led the turnover-in-the-tackle count 12-3 was a real compliment to the determination of the side to win back possession at the earliest opportunity. The glorious is built on such unglamorous work.

Ryan Burns converted a free in the 33rd minute to leave Louth trailing by four (1-9 to 0-8), but Tipp responded with a Conor Sweeney free before Liam Kearns’ men created another goal-scoring opportunity in the 35th minute - this time Alan Campbell’s shot was blocked.

Points from Derek Maguire and Michael Quinlivan closed out the half to leave Tipperary leading by five (1-11 to 0-9) at the break. And, although that strike represented Quinlivan’s first from play the Clonmel Commercials man was the key attacker from Liam Kearns’ point of view. Indeed, the Louth full-back was replaced at the interval. 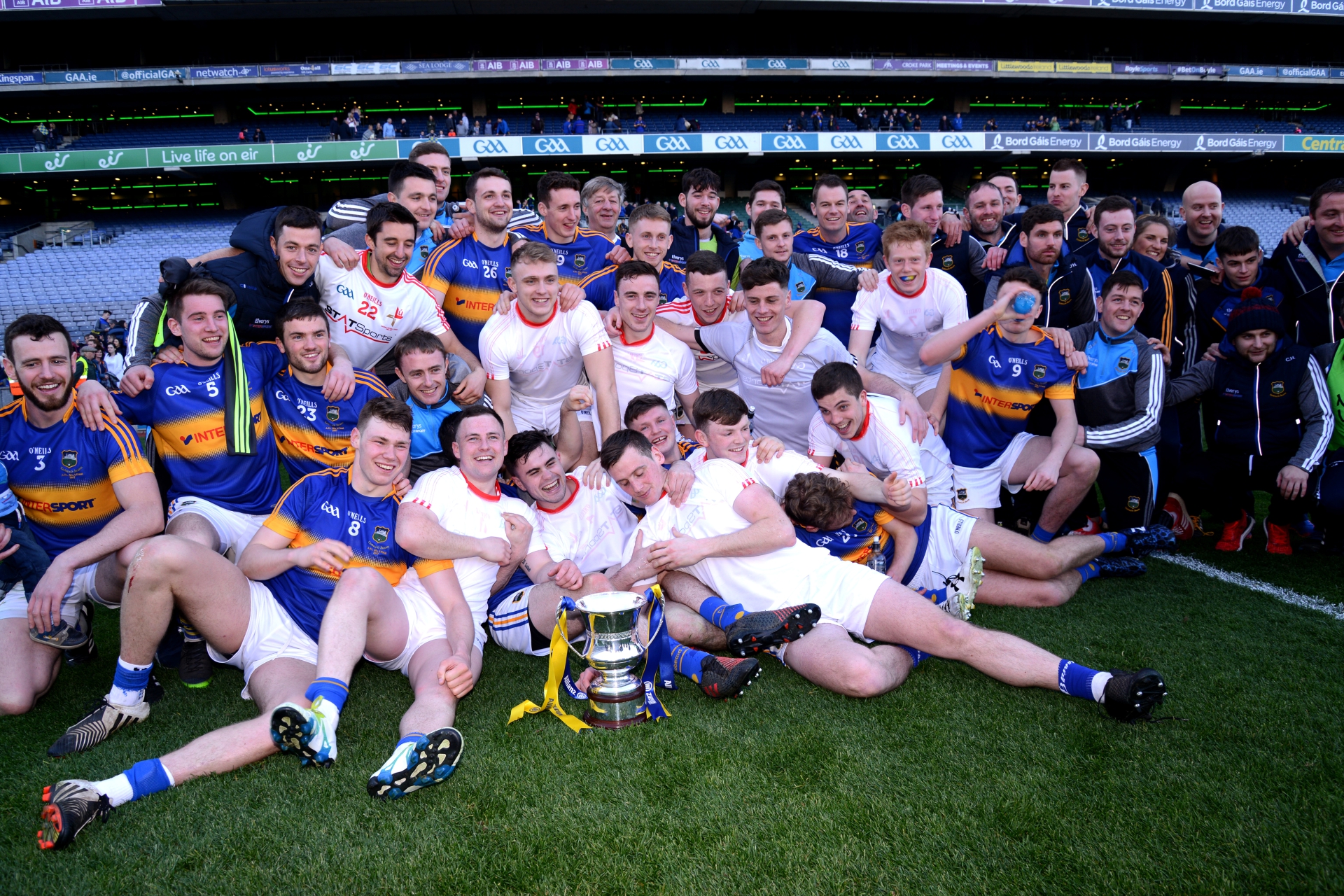 Louth made an enterprising start to the second half when out-scoring Tipperary 0-4 to 0-1 during the opening six minutes. Declan Byrne, Ryan Burns (two, one free) and Tommy Durnin were responsible for the Louth efforts while Robbie Kiely responded for Tipp in the 38th minute (1-12 to 0-13).

Tipperary enjoyed a slight sniff of ‘keeper Craig Lynch’s goal in the 42nd minute, but had to content themselves with a Jack Kennedy point when the Louth defence recovered just in time to smother the opportunity. Both Conor Sweeney and Michael Quinlivan featured in an eye-catching move before Kennedy applied the finish (1-13 to 0-13).

The Tipperary midfield of Jack Kennedy and Liam Casey had now contributed 1-3 from play - the lung-bursting runs from this duo to get up in support of the inside line was especially impressive.

Thanks to a left-footed effort from Kevin O’Halloran and a terrific Michael Quinlivan free from an awkward angle Tipperary led 1-15 to 0-13 by the 44th minute.

Tommy Durnin notched his third point from play, but we suspected that the effort would prove token in nature and so it proved - in the 47th minute Tipperary struck for their second goal. Conor Sweeney set up Kevin O’Halloran for a goal chance and although Bevan Duffy did especially well to block the shot a combination of O’Halloran and Sweeney managed to turn over the misfortunate Louth man and the Ballyporeen star finished from close range (2-15 t0 0-14).

The contrast between the effectiveness of the respective full-forward lines was stark - by the 57th minute all three of Louth’s inside line had been replaced.

Ryan Burns and Conor Sweeney then traded frees before Jim McEneaney’s ambitious effort at goal was parried by Evan Comerford. Successive frees from the boot of McEneaney closed the gap to four with five minutes to play before a Declan Byrne placed ball left four in it (2-16 to 0-18).

Josh Keane settled Tipp with a point in the 68th minute and the impressive aspect to this score was the fact that Liam Kearns’ side built such a composed attack, which originated from a short Evan Comerford kick-out, just when Louth were getting ideas about mounting a late comeback.

McEneaney concluded the scoring from a Louth in the first minute of injury time, but there was still time for Conor Sweeney to find himself completely unmarked in the opposition half of the field, Liam McGrath picked him out and Sweeney stepped around Craig Lynch before delivering a smart finish. This guy is an absolute class act.