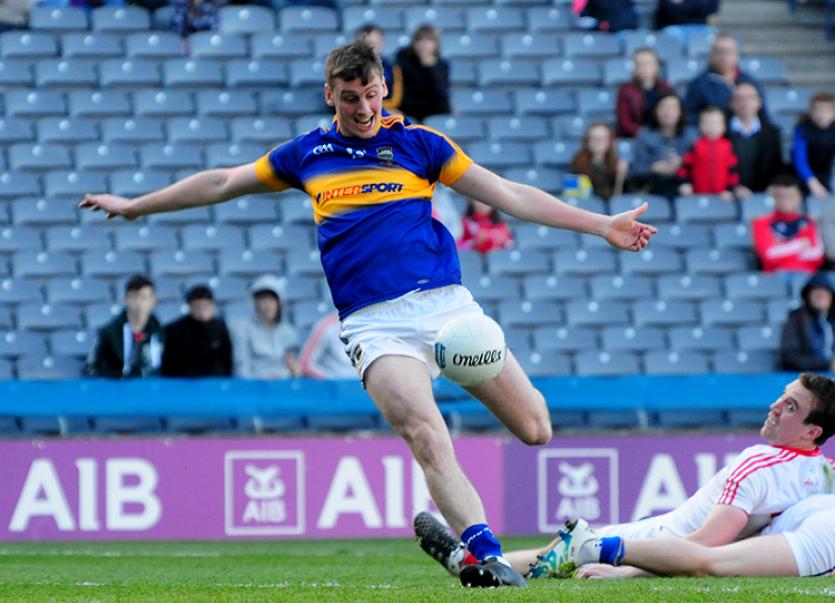 Ballyporeen’s Conor Sweeney was in terrific form during Tipperary’s 3-19 to 0-19 Allianz National Football League division three final win over Louth at Croke Park, Dublin on Saturday. Prior to the game the fact that Liam Kearns’ men were asked to play for five consecutive weeks concerned supporters, but Sweeney was having none of it. He refused to accept excuses and booted home 2-5.

"It was not challenging at all - it's there, it has to be done and you just get on with it,” Conor Sweeney said following Tipperary’s nine-point win over Louth.

“There are loads of excuses there for us, but we decided not to go with them. We decided to go out there and get on with it. And, we did,” Conor Sweeney added.

The logistics of the frantic finish to the Allianz National Football League division three campaign still had to be managed in a composed manner and Conor Sweeney was eager to highlight the contribution of the management team in that regard - Liam Kearns is the manager of the side and Shane Stapleton (Golden-Kilfeacle) is the team’s coach-selector while Paul Fitzgerald works as both a selector and the Tipperary goalkeeping coach.

“I think our management (team) and our physios and the lads who look after us deserve a lot of credit because they keep us ticking over week-in week-out. Five games in five weekends is tough on the body and it is tough mentally as well. I think we showed a lot of resolve over the last few weeks and it says a lot about us. So, we are just glad to get over the line today,” Conor Sweeney explained before adding that once Tipperary had secured promotion to division two following the side’s dramatic win over Armagh last week the Premier County could concentrate an expressing themselves at Croke Park.

“That was what it was all about today: winning. And, anybody who says any different is lying. To get the win was important. When we came up the pressure was off us a little. We got the job done last week so we could express ourselves just that bit more and I think we did that well today,” Conor Sweeney said.

“So, yeah, it is very satisfying to be going home with the cup now,” the Ballyporeen explained before revealing that the new-found depth in the panel in terms of playing resources was making a big impact.

"It is something that we haven't had over the last few years and we paid the price,” Conor Sweeney said.

“You saw there last year come the business end of the season we probably suffered against Mayo because we just didn't have the strength in depth. We certainly have that this year and, hopefully, we can keep lads fit. Liam (Kearns) mentioned it there that two or three lads came off the bench last Sunday (v Armagh) and that was the difference between the team getting the promoted and not. And, today we saw the difference again. Liam McGrath and Liam Boland kicked points when they came on so the bench is making an impact which is something that we haven't had before,” Sweeney added.

There was, of course, added spice to this contest. Two weeks previously Louth had paid a visit to Semple Stadium, Thurles and sealed promotion to division two following a performance which saw the men from the Wee County beat the home side 0-16 to 0-12. And, as you would expect, Colin Kelly’s men celebrated the win with some gusto at the final whistle. That scene, it seems, did not go down well with the Tipperary players.

"If you hadn't the bit between your teeth today I don't know when you would have it,” Conor Sweeney revealed.

“That fair hurt us two weeks ago to see them celebrating at the final whistle - it was just that feeling in your stomach; it was absolutely sickening. There was an extra bit of an incentive there because we knew that we had under-performed that first day in the second half against Louth. That was the most disappointing thing - we just didn't play. We knew we could beat them if we performed well and thankfully today we did."

Tipperary miss-fired against Louth at Semple Stadium when losing the second half of that encounter 0-10 to 0-4, but the Premier County made a startling return to their very best form on Saturday.

"I think every footballer or hurler wants to be here (in Croke Park),” Conor Sweeney explained.

“This is what it is all about and, to be honest, I don't think teams get here often enough. I think the league finals are great. When I was a young fella years ago division three and four (finals) were never played here so I think it's great. It's a good opportunity for lads to play here and like Liam (Kearns) said it suits us, but I would not be getting carried away either. It's a bigger field and it's a better surface - the conditions suit us down to a tee. It's just incredible. I know one half of the stadium was empty today, but it's still incredible to be in here. The more times we can get here the better,” Sweeney added.

"Sport is so cruel and especially at the top level - one day you are on a high and another day you could be brought right back down to earth. We knew that last week was a game changer for us. Liam (Kearns) said it beforehand that if we could beat Armagh it would give us momentum for the summer. And, it certainly did. It certainly gave us momentum coming here today. Like I said earlier we could throw off the shackles and play.”

And, Conor Sweeney’s 2-5 haul in the league final propelled the Ballyporeen man to the summit of the division three scoring charts. Prior to the game on Saturday Sweeney trailed Donie Kingston by ten points, but an 11-point return against Louth helped Conor (4-38) to overtake the Laois man (5-34).

"You don't really set out at the start of the year to become a top scorer or anything like that. You worry about getting fit,” Conor Sweeney said.

“I had a decent year last year, but I was nearly not playing because I got a bad injury before the first round of the championship. You just have to focus on getting right, hit the ground running and, hopefully, you can stay injury free - that's my biggest concern. If you can stay injury free you will go a long way toward playing well. I am judged on what I score and that's the way it is. If I don't score I have a bad game and if I score well people are talking about me. I am just glad today that I could reward the lads inside.”