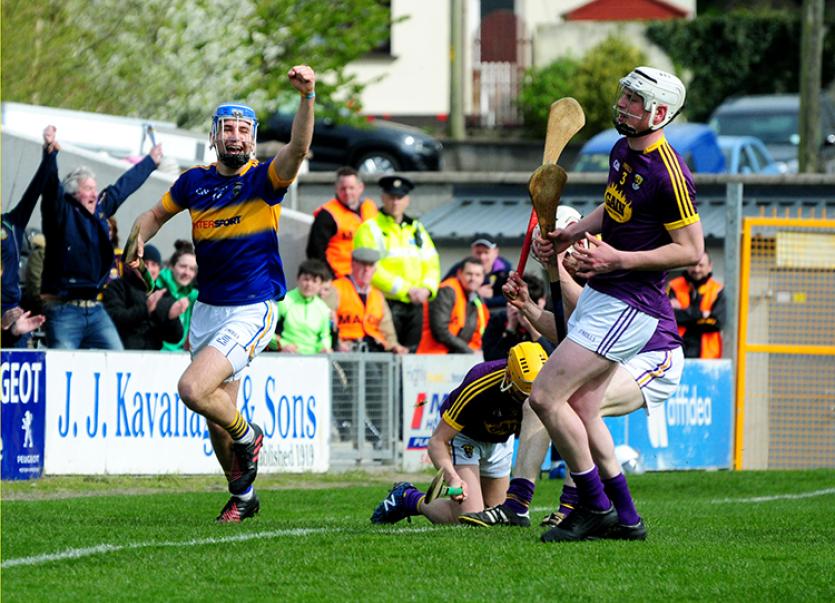 A five-goal blast sealed Tipperary’s place in the league final - Michael Ryan’s men played a fearless and direct form of bicep-flexing hurling on Sunday and were rewarded with an eleven-point victory.

And, while Tipperary exploded into devastating life during a five-minute period in the second half to settle this contest at Nowlan Park, Kilkenny David Fitzgerald’s Wexford pushed the All-Ireland champions all the way. Indeed, Wexford hardly deserved to lose by such a significant margin.

Wexford, for instance, were within two of Tipperary (2-12 to 0-16) in the 57th minute and hurling well. Tipperary, however, pulled their opponents apart in an explosive five-minute period which yielded a 2-4 dividend.

Given the circumstances this was really heart-warming stuff from Michael Ryan’s men. Tipp were playing into a stiff breeze, against a sweeper and found themselves pitted against a highly-motivated opponent, but they still found another gear when it mattered and settled the game with a ferocious burst.

Pádraic Maher, Brendan Maher, Dan McCormack and John McGrath (TG4 man of the match) were excellent for a Tipperary side who, as you would imagine, still have room to improve.

So early in the year it might seem a little churlish to pour a surgical light on the team’s imperfections, but it was a little worrying to see the Premier County lose the turnover-in-the-tackle count 22-26 at Nowlan Park - during 2016 Tipperary won the turnover count in every competitive match played.

Steven O’Brien roused the 19,095-strong crowd with a sensational hit in the second minute before Niall O’Meara and Noel McGrath combined to set up Séamus Callanan for the opening score of the game - Callanan added a ’65 and Tipp led 0-2 to no-score after five minutes.

James Breen read a Séamus Kennedy delivery beautifully in the sixth minute, but miss-controlled the ball horribly and presented John McGrath with an opportunity to turn the ball over and race through unchecked. The Loughmore-Castleiney man buried his shot in the roof of Mark Fanning’s net and Tipperary led 1-2 to no-score.

For all of the pyrotechnics associated with opposition defence Tipperary led the turnover battle four-nil, but to be fair to David Fitzgerald’s team Wexford steadied themselves and won the turnover-in-the-tackle stat 13-7 during the remaining minutes of the opening half.

But Wexford happened upon further misfortune in the 18th minute when another Wexford defender was turned over inside his own 45-yard line and Niall O’Meara picked out the unmarked Noel McGrath who delivered a composed finish (2-2 to 0-2).

In response to the McGrath goal Wexford manager David Fitzgerald was beside himself with anger and charged onto the field in order to remonstrate with referee Diarmuid Kirwan and, subsequently, Tipperary player Jason Forde. The entire scene was utterly distasteful and needless.

The Wexford players, in contrast, kept their heads and a smart puck-out from Mark Fanning picked out Diarmuid O’Keeffe. The wing-back, in turn, found Aidan Nolan who raced through and had goal on his mind, but Pádraic Maher intervened with a timely hook. In the end Conor McDonald swung over a point, but a goal was avoided.

Dan McCormack recycled smartly out of the left corner to find Brendan Maher for a neat point in the 21st minute, but Wexford hit back with points from Lee Chin and David Redmond before a Séamus Callanan effort, following a smart Pádraic Maher delivery, helped Tipperary into a five-point lead. That advantage was stretched to six soon after when Callanan’s stick pass found Jason Forde and the ‘Mines man delivered off his left.

Two more Conor McDonald frees roused Wexford, but Pádraic Maher responded for Tipp when the Thurles man won a ruck in the middle of the field, strode forward and landed a point off his left. A Diarmuid O’Keeffe effort brought the opening half to a close (2-6 to 0-8) and, to be fair, Wexford were now in a reasonable position.

Despite playing into the breeze David Fitzgerald’s men had accumulated twenty-two shots at Darren Gleeson’s goal (Tipperary fifteen), now led the turnover-in-the-tackle count 13-11 and had a Wexford crowd behind them who were just primed to scream their heads off.

Wexford started the second half in encouraging fashion with two Conor McDonald frees and a Paul Morris strike rousing their supporters no end while only Brendan Maher responded for Tipperary - in the 42nd minute the Premier County led 2-7 to 0-11.

Michael Breen, an interval substitute, then made a significant intervention when firing points in the 42nd and 43rd minutes before Noel McGrath notched an absolute smasher (2-10 to 0-11).

David Redmond hit back with a brace for Wexford, but Michael Breen and Jason Forde responded in kind for Tipperary and with twenty minutes to play Michael Ryan’s men enjoyed a reasonable five-point cushion (2-12 to 0-13).

This Wexford side, however, are hard to discourage and a three-point surge between the 53rd and 57th minutes dragged the division 1B champions to within two (2-12 to 0-16). Lee Chin scored two of the three and his strike off the left with thirteen minutes to play was something to behold. The Wexford fans greeted the score with wild acclaim and were now beside themselves with excitement.

This group of Tipperary players, however, have proven themselves to be a side of significant pedigree and the All-Ireland champions stepped it up a gear or three with ten minutes to play. Ironically enough it was a reasonably poor ball forward which set Tipp on their way; Séamus Callanan managed to break the delivery into the path of Dan McCormack - the Borris-Ileigh man carried briefly before finding John McGrath who finished right-handed for his second goal of the afternoon; two minutes later McCormack created the room for Noel McGrath to fire a point while John McGrath added another soon after.

John O’Dwyer’s diagonal delivery in the 63rd minute from left half-forward, which picked out Noel McGrath in the right corner following a smart Michael Cahill clearance, was something else - how the Killenaule star saw McGrath drift in behind his marker never mind find him was extraordinary. Noel caught O’Dwyer’s sensational delivery and slotted home Tipperary’s fourth goal. John McGrath and John O’Dwyer added further points to the Tipp tally and Michael Ryan’s men led by twelve thanks to 2-4 without reply in five minutes.

Wexford conjured a goal chance of their own in the 66th minute, but James Barry threw his body on the line and took the full force of a Conor McDonald rasper on his leg. The full-back required treatment following the incident which would suggest that the nature of the shot was of the stinging variety.

A Conor McDonald free brought ten scoreless minutes to a close for Wexford before Dáire Quinn set up Brendan Maher for Tipperary’s fifth goal in the 69th minute.

Kevin Foley and Dáire Quinn then traded points before Jack Guiney was fouled for a penalty in the 72nd minute - Darren Gleeson saved Mark Fanning’s effort before Michael Cahill dived in front of a Lee Chin shot in an effort the maintain Tipperary’s clean sheet. Unfortunately Wexford finally scooted in for a Liam Ryan goal in the 74th minute before points from Michael Breen and Lee Chin (’65) brought this contest to a close.