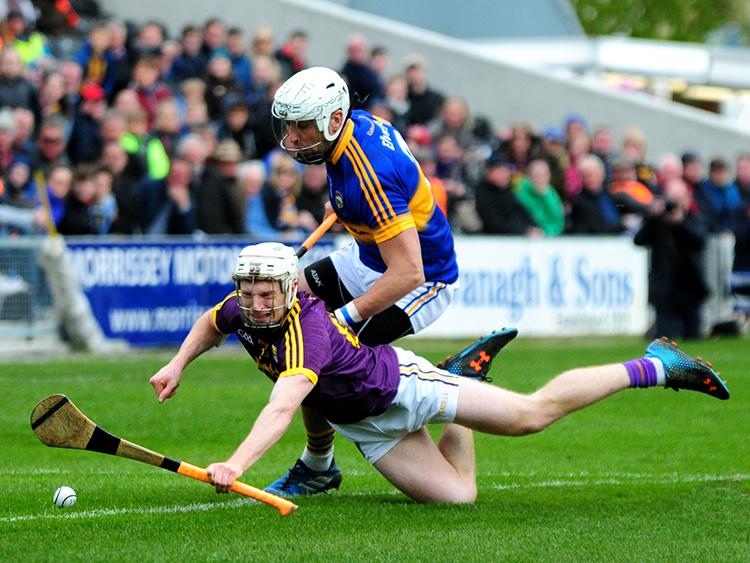 On Sunday afternoon Tipperary fired five goals during a 5-18 to 1-19 semi-final win over Wexford at Nowlan Park, Kilkenny. For a full report on this contest please click here.

On Friday night in Ardfinnan Moyle Rovers required extra-time to get the better of Clonmel Commercials (1-11 to 0-13) in the South Tipperary Under-21A Football Championship final. Then, on Sunday, Moyle Rovers faced JK Bracken’s in a county semi-final and won 0-15 to 1-8 after extra-time. A Paddy Cadell goal presented JK Bracken’s with a 1-5 to 0-3 interval lead, but Rovers fought back to force extra-time and, ultimately, battle their way in the county final.

Meanwhile on Saturday at The Ragg Galtee Rovers won their respective county under-21A football championship semi-final against Clonakenny-Moneygall (4-22 to 1-8).

The Tipperary Water County Under-21B Football Championship semi-finals also took place on Saturday. Unfortunately, referee Brian Tyrell was forced to call off the clash between Clonoulty-Rossmore and Portroe at half-time (1-04 to 0-4) due an injury suffered by Clonoulty-Rossmore captain Garry Donnelly. An ambulance was called to the scene and, ultimately, it was decided to transfer the player by helicopter to hospital. The game has been re-scheduled for Monday, April 17th in Borrisoleigh at 4pm.

In Leahy Park, Cashel Cahir enjoyed a six-point win (2-10 to 1-7) over a hard-working Gortnahoe-Glengoole team in a reasonably one-sided under-21B football championship semi-final.

Tipperary made an eye-catching debut in the Munster Camogie championship on Saturday afternoon when the side managed by Brian Boyle beat Waterford by ten points in a quarter-final played at the WIT Arena in Waterford (4-14 to 2-10).

Next up for Tipperary is a Munster semi-final against Limerick on Saturday, April 29th while Cork and Clare battle it out on the opposite side of the draw. For a full report on the win over Waterford please click here.

Shane Ronayne’s ladies football team beat Offaly 7-16 to 2-5 in a Lidl National Football League division three semi-final played in Clane on Sunday while in the minor championship the Premier County beat Clare 3-7 to 0-8. Tipperary will face Wexford in the final on Sunday, April 30th.

The league phase of the Ulster Bank League Division 2A season came to a conclusion on Saturday - Nenagh Ormond beat Belfast Harlequins 42-38 while Cashel RFC lost away to Malone (15-45).

Nenagh Ormond have qualified for the play-offs and will take on Highfield on Saturday, April 22nd at 1.30pm in Cork. Highfield will be favourites to win that play-off semi-final, but Nenagh will take confidence from the fact that Ormond beat Highfield on March 25th 36-24 at New Ormond Park. In October Nenagh Ormond paid a visit to Highfield and earned themselves a 16-all draw.