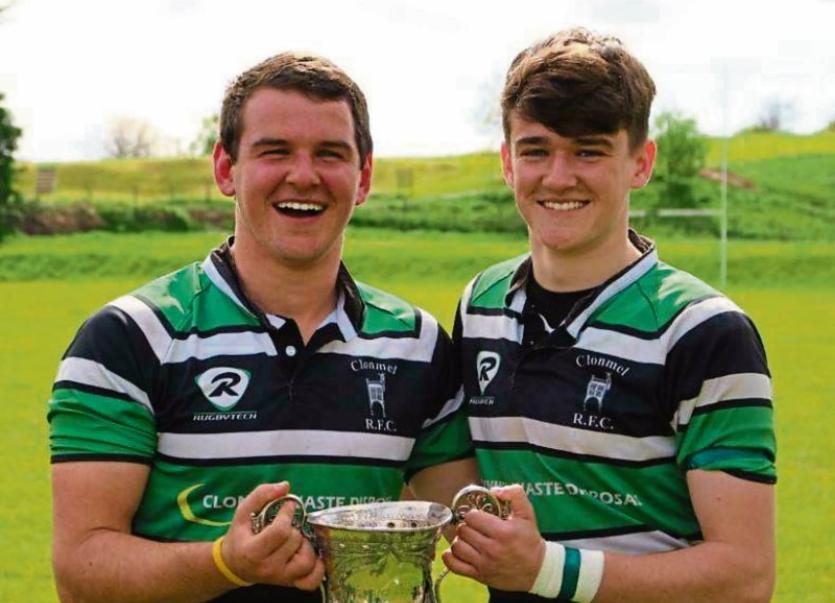 Brothers Joe and Alex Sheehan with the cup.

After the disappointment of losing in the semi-final of the Gleeson cup last week, Clonmel’s second XV returned to Clanwilliam to play in the final of the Evans cup against Cashel on Sunday.

Cashel regathered themselves and broke forward. Pressure led to Clonmel giving up a penalty which the Cashel fly half converted to put them in a 3-point lead. After tough battling in midfield, Cashel cleared the ball downfield to the waiting Clonmel full back, Darren Cass who ran the ball back, broke through the Cashel line to offload to David Lonergan. Again, Clonmel were thwarted just before the line.

Clonmel’s next attack saw them finally score the try they deserved. Clever running by the experienced Lonergan  brothers David and Brian, saw them free up David Hoyne who raced under the posts to score. Hoyne converted his own try to put Clonmel in the lead. 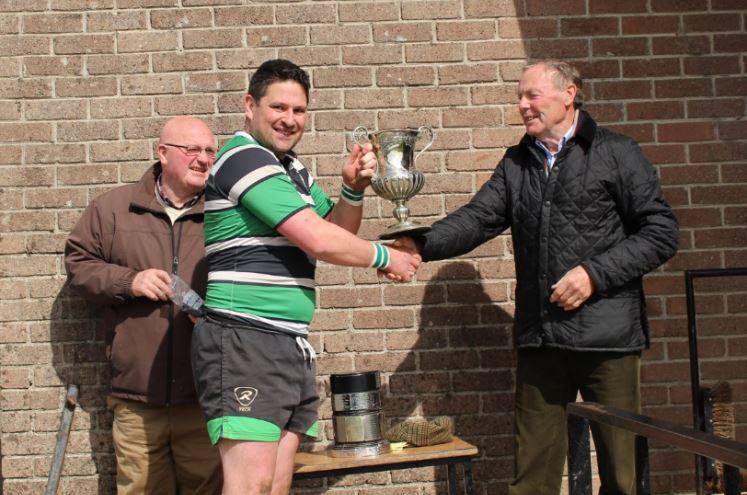 Cashel attacked from the kick off and put huge pressure on the Clonmel defence. A great turnover a couple of yards from his own line by Darren Cass allowed Clonmel to clear their lines and end the half with a four-point lead.

Clonmel came blazing out after the restart and a big gather by the impressive James Kehoe brought Clonmel into attack again. Clonmel’s first team have punished opposition scrums all season and this was the case again today. A penalty at scrum time allowed David Hoyne to extend Clonmel’s lead by a further 3 points. Cashel came attacking back and a penalty reduced the deficit again.

After 16 minutes of the second half, David Lonergan made a searing run down the tramlines. Good hands saw centre Conor Tobin released to score. Hoyne’s conversion saw the score line stand at 17-6.

Clonmel were now letting loose and attacking Cashel constantly. They were awarded a penalty inside the Cashel 22’. They opted for the scrum. A preplanned move released Cass to score his second of the day.

Next to get in on the act was Dean Slattery wo raced down the left wing only to be denied inches from the line. From the next play, Conor Tobin raced over the line to score his second.

Clonmel’s final try of the game after dynamic flanker, Jack Lonergan raced through the beleaguered Cashel defence. From the subsequent ruck, substitute scrum half Alex Sheehan darted over the line to finish the game 39- 6.

The Clonmel team with the Evans Cup.

This was a fine win by a team that combined youthful exuberance with clever experience. Great credit goes to coach P J Mulcahy and team manager Rosario Matassa for assembling a fine team and bringing more silverware to Ardgeeha.