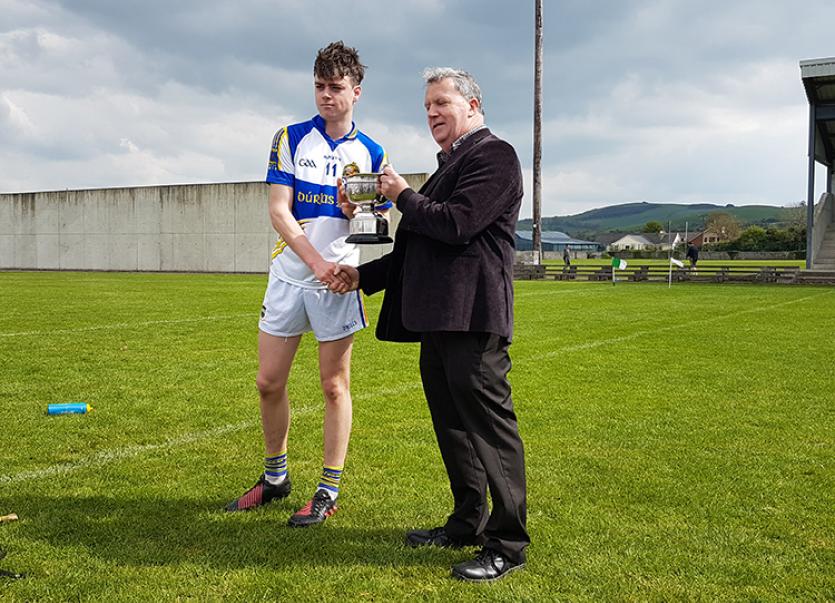 If you required something to brighten up your week Templederry was the place to be on Thursday afternoon when Thurles CBS edged a thrilling Fitzgerald Cup final with Nenagh CBS - this contest featured forty-six scores in all and proved an enthralling affair from start to finish with, in the end, Conor Bowe collecting the trophy on behalf of his thrilled teammates.

For Thurles CBS Zach Jackson and Darren Flood were outstanding while for Nenagh CBS Conor Grace, Seán Hayes and Bryan McLoughney shone bright. Moyne-Templetuohy’s Conor Bowe, however, was the outstanding player on the field. His ball-winning ability would suggest that this county minor might have something special. It is worth noting, however, that Nenagh CBS ‘keeper Conor Grace also looks like an exciting prospect for the future.

Nenagh CBS operated during the opening half with a strong wind at their backs. Indeed, such was the strength of the prevailing conditions that ‘keeper Conor Grace landed a series of puck-outs inside the Thurles 21-yard line which made life interesting for the opposition backline to say the least.

The Nenagh CBS lads started reasonably well and led 0-5 to 0-2 as early as the 18th minute. Just then, however, Thurles CBS struck for the opening goal of the game - Darren Flood snapped a terrific ball and found Conor Bowe’s off-the-shoulder supporting run. Conor Grace saved smartly from Bowe, but Max Hackett was on hand to dispatch the rebound. Four minutes later ‘keeper Conor Grace advanced to smother a Darren Flood opportunity as Thurles threatened to cut loose.

Nenagh CBS required a goal in the opening half and appeared to have created a terrific opportunity in the 24th minute, but Zack Jackson recovered in the nick of time to hook the raiding Bryan McLoughney. Nenagh CBS, however, refused to let themselves get discouraged and five minutes from the break Kian O’Kelly buried a rousing effort following a great catch. Bryan McLoughney added a point from play soon after and Nenagh CBS led by five (1-9 to 1-4).

Thurles CBS, however, closed out the half with three successive points (two frees) to leave two between them at the break (1-9 to 1-7).

Nenagh CBS tried incredibly hard during the opening minutes of the second half, but following a flurry of scores (eight) the sides were level (1-12 apiece) by the 38th minute. Conor Bowe then helped Thurles CBS into a narrow lead before Bryan McLoughney (free) equalised. Then, in the 42nd minute, it appeared as if this contest had reached a critical juncture - Stephen Kirwan found Bryan McLoughney, but the Kiladangan man’s clever effort clipped the crossbar and ricocheted over for a point. A goal at that stage of the game might well have wrenched the trajectory of this contest in Nenagh CBS’ favour.

During the ensuing three minutes Nenagh CBS ‘keeper Conor Grace was required to make two saves from Stephen Carr and Darragh Tynan respectively. Nenagh, though, were still hurling reasonably well. Seán Hayes notched five points in all from play and when Seán Shanahan fired over a super point in the 47th minute Thurles CBS trailed 1-15 to 1-17.

A Max Hackett point reduced the margin to the minimum before a misfortunate Nenagh CBS defender was hooked in the 51st minute; Darren Flood gathered the ball, found the unmarked Conor Bowe and, this time, the Moyne-Templetuohy man made no mistake (2-16 to 1-17).

Bryan McLoughney responded with a free for Nenagh, but Thurles CBS were growing in confidence and Darren Flood rifled a shot off Conor Grace’s crossbar in the 52nd minute. Flood and Conor Bowe added Thurles points to force their side three clear, but Nenagh CBS hit back with two of their own; a Conor Bowe strike from play and then a monster long-range free from the Thurles CBS centre-forward edged his side into a three-point advantage (2-20 to 1-20) by the 59th minute.